2) Fiji opposition leader says govt betraying West Papua
3) Opposition leader calls on Fiji to end ‘betrayal’ of West Papuans
4) A total of 133,025 children in Papua vaccinated of Measles and Rubella
5) 3.7-magnitude earthquake hits Jayapura district
———————————————————————
1) Letter to PIF leaders from West Papua Action Auckland
A congratulatory letter has been sent to Vanuatu Prime Minister, Charlot Salwai and to Vanuatu’s special envoy on decolonisation for West Papua, Lora Lina
West Papua Action Auckland
PO Box 68419
Auckland, New Zealand
25 August 2018
Dear Prime Minister/ President,
We understand the issue of West Papua will come before the 49th Pacific Island Forum in Nauru. We strongly urge you to support Vanuatu’s proposed draft resolution intended for the United Nations General Assembly in 2019. This resolution ‘Realisation of the right of Papuan people to self-determination in the former colony of the Netherlands New Guinea (West New Guinea)’ was tabled by Foreign Minister of Vanuatu Mr Ralph Regenvanu at the recent meeting of Pacific Forum foreign ministers and Vanuatu Prime Minister Charlot Salwai intends to discuss this at the September Forum meeting.
The denial of the right of self-determination to the West Papuan people in the 1960s set the scene for decades of state-sanctioned violence against the indigenous population. The people of West Papua were never given an opportunity to determine their own political destiny. The 1962 New York Agreement brokered by the United States delivered West Papua to Indonesian control without any consultation with West Papuan representatives. As Papuan leader Markus Kaisiepo described the situation, they “were traded as goats by the Americans”. The so-called ‘Act of Free Choice’ of 1969, mandated by the New York Agreement, was a fraudulent exercise carried out under extreme duress. As human rights lawyer Julian Aguon has pointed out, “in no universe was the infamous 1969 plebiscite a valid exercise of self-determination.”
As you know, Vanuatu’s latest initiative builds on the advocacy work undertaken by Vanuatu and several other Pacific nations in the UN General Assembly and at the UN Human Rights Council. This high-level lobbying reflects the burgeoning support for West Papuan rights among the peoples of the Pacific, including Aotearoa. It also reflects the growing strength of West Papuan resistance which is united under the umbrella of the United Liberation Movement for West Papua (ULMWP). We note that a number of MPs in this country have called for the issue of West Papua to go back before the UN Decolonisation Committee.
This issue is extremely urgent. There is much evidence that the people of West Papua are experiencing slow genocide due to ongoing human rights abuses and the harmful conditions of life experienced by so many Papuans. The Genocide Convention says that “deliberately inflicting on the group conditions of life calculated to bring about its physical destruction in whole or in part” meets the definition of genocide.
The recent Amnesty International report Don’t bother just let him die: killing with impunity in Papua documented 95 extrajudicial killings at the hands of the Indonesian security forces in a ten-year period. Not a single perpetrator was brought before a civilian court. This report is the latest in a long list of authoritative human rights reports documenting the routine use of torture and killings as well as the denial of fundamental rights such as the right to freedom of speech and freedom of assembly. The indigenous population is also subject to ongoing suffering because of Indonesia’s gross neglect of basic health services in rural areas. An outbreak of measles which came to attention early this year claimed the lives of dozens of malnourished Asmat children.
It must also be noted that the proportion of indigenous Papuan people as a percentage of the total population continues to decline as a result of migration from other parts of Indonesia. This inward migration poses a huge threat to the well-being of the people who live in areas targeted for exploitation of minerals and forests, or for the expansion of palm oil and other lucrative agri-business projects.
We strongly urge you to support Vanuatu and its plan to take the issue of the right to self-determination of the West Papuan people to the UN General Assembly.
Yours sincerely
Maire Leadbea
For West Papua Action Auckland.
———————————————————————————
https://www.radionz.co.nz/international/pacific-news/365029/fiji-opposition-leader-says-govt-betraying-west-papua
2) Fiji opposition leader says govt betraying West Papua
The Fiji opposition leder, Ro Teimumu Kepa, says the government has to stop its betrayal of the people of West Papua. 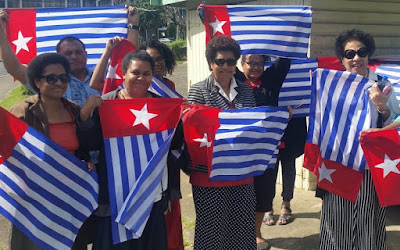