2) Refugees not here by choice, says academic
3) NZ MP urges redress of West Papuan issue
4) ENVIRONMENTLocal communities work together to combat city waste in Nabire
------------------------------------------
http://www.xinhuanet.com/english/2018-08/01/c_137361856.htm
1) Indonesian police thwart separatist plot in west Papua
JAKARTA, Aug. 1 (Xinhua) -- Indonesian police have foiled a plan by separatists in west Papua to establish a transient administration of an independent state, police said here Wednesday.
Spokesman of Indonesian national police Inspector General Setyo Wasisto said that police had seized all attributes and banners before the planned inauguration event kicked off on Tuesday outside Cendrawasih university.
"When we were snatching the banners and the attributes they (the participants) immediately dispersed themselves just before the event commenced," Wasisto said at Jakarta Convention Center.
The spokesman said that police had found invitation letters widely distributed before the event, which were signed by Yoab Syatfle who claimed himself as prime minister of the transient administration of the planned state, said Wasisto.
The invitation was directed to all ethnic groups and the people of Papua, according to the police.
Papua is home to the Free Papua Movement separatist group, which has engaged in guerrilla wars to establish an independent state.
--------------------------
https://www.thenational.com.pg/refugees-not-here-by-choice-says-academic/
2) Refugees not here by choice, says academic 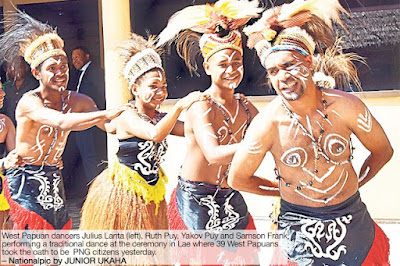 By JUNIOR UKAHAWEST Papuan refugees seeking to live in Papua New Guinea have not come to look for land or home but were forced out of their country, according to John Lanta.Lanta, 48, originally from Skou village in West Papua, was one of the 39 West Papuans who took the oath to be Papua New Guinea citizens at a ceremony in Lae yesterday. Lanta, an academic at the University of Technology, said the West Papuan refugees in PNG were a “special case” people.
“West Papuans did not initially come looking for a permanent home. We are different from other settlers,” he said.“We have a home, we have land, we have everything. But our reasons for being here, we cannot express further. You already know. Our fathers and mothers thought that the journey across the border would be a temporary one.“Those who arrived in the ’60s thought they would be back by the ’70s. Those who arrived in the ’70s thought it would be the ’80s. The wait prolonged.“Then more came in the ’80s and in the ’90s.”He said they then realised “that we may be here for a lifetime”.“Integrating into PNG culture was slow and hard at first maybe because we refused to believe that our separation from our people and loved ones was going to be permanent,” he said.“Many suffered depression and many died without a peace of mind.“But as time went on, our wounds have healed and, for some, perceptions have changed.”
----------------------
https://www.radionz.co.nz/international/programmes/datelinepacific/audio/2018656366/nz-mp-urges-redress-of-west-papuan-issue
3) NZ MP urges redress of West Papuan issue
A New Zealand government MP says the issue of West Papuan self-determination should be heard at the United Nations.
Louisa Wall made the comment at the launch of a new book examining New Zealand's position on Indonesia's Papua region, known widely as West Papua.
In her book 'See No Evil: New Zealand's betrayal of the people of West Papua', author Maire (my-ree) Leadbeater criticises successive governments for failing to support Papuan rights.
Ms Wall told Johnny Blades that she hopes more MPs will read the book and learn about Papua.
Listen duration 3′ :33″
Add to playlist
Download

LOUISA WALL: I believe in self-determination, I believe in indigenous rights. This is a right of the West Papuan indigenous peoples to re-litigate something that has been highlighted, actually was done in an unjust and unfair way. It was post-World War II. Obviously it was a convenience for the powers at that time. But I would hope what would guide us are issues of principle, fairness, justice, human rights...
JB: Do you think if more MPs knew about the context of the Act of Free Choice and the referendum, do you think there might be some changed attitudes?
LW: Yeah I do actually, because I believe that through information, people make informed decisions, and the fact now that we have a book titled 'See No Evil' that is quite critical of New Zealand's position, but it outlines the history of the issue, means the pathway forward really is, is there an appetite and a priority to redress an historical wrong? There are growing numbers of us that have become aware and do support the call for a free vote. I supported the call to add West Papua back on to the (UN) decolonisation list. Because actually they were on there and then they were taken off there. But there are mechanisms, and I believe we just need to continue to push the United Nations. And when I say "we" it's the coalition of the willing, really. There are parliamentarians right across the world that support this. But probably the entity that I think would have the greatest ability to influence New Zealand and Australia is the Pacific Islands Forum. And I know it is a priority for them. But at minimum, we should be making sure that the health needs, the social needs of west Papuans are taken care of. And when I hear stories of 72 children dying from a preventable disease (recent measles outbreak in Asmat regency) it's heart-breaking. We really need to hold Indonesia accountable, because they're responsible for ensuring their citizens have equal access to everything that that government provides to its citizens.
JB: Jakarta is very sensitive over international representations over Papua. How do you counter that?
LW: We just have to control what we can do as a parliament. We have a membership across the parliament. It's not more than fifty percent of us. Then obviously we could start to push for change more cohesively as a parliament. But I think individual MPs do what we can. I mean certainly within the Labour caucus, through our Pacific caucus and our Maori caucus, because this is an issue of indigeneity, and it's a result of colonisation, where we understand what West Papuans were fighting for, which is why we've addressed this issue and discussed this issue at our caucus. So we fully support the call for a free vote.
———————————————
http://tabloidjubi.com/eng/local-communities-work-together-to-combat-city-waste-in-nabire/
4) ENVIRONMENTLocal communities work together to combat city waste in Nabire
Nabire, Jubi –Nabire has struggled with the problem of city waste. A pile of garbage is stacked in the markets and scattered along the coastal area and the river, especially in a green path area started from Tugu Cenderawasih to in front of Nabire General Hospital.
A local community, Amoye Community who is part of Kopena (Komunitas Peduli Nabire), initiated an act of cleaning garbage every week along the path. However, it doesn’t work alone. On Tuesday afternoon (24/7/2018), Amoye Community along with Wate Tribal Council (WTA), who is one of the landowners in Nabire City, cleaned the green path.
Yohan Raiki/Wanaha, the Wate Tribal Chief of sub-village Oyehe, said Nabire City is like a house of everyone. Whoever you are, no matter which tribe you come from or what your religion is, as long as you live in Nabire, we have an obligation to the environment,” he said on Thursday (24/7/2018) after doing the activity.
Meanwhile, the Chairman of the Amoye Community Bentot Yatipai said the Regional Regulation on Waste Management actually has been approved and legalised by Nabire House of Representatives six months ago.
“The regulation has sent to the Legal Bureau Office of the Provincial Government for further legitimation. However, it has no answer yet. (*)
Reporter: Titus Ruban
Editor: Pipit Maizier
--------------------

Posted by AWPA Sydney News at 1:43 AM