1) KASDAM: TOO LATE FOR POLITICAL DIALOGUE

1) KASDAM: TOO LATE FOR POLITICAL DIALOGUE

Jayapura, 22/5 (Jubi) – It is too late to conduct dialogue on the status of Papua because it is an inseparable part of Indonesia, the Cenderawasih military command chief of staff , Brigadier General Hinsa Siburian, said on Tuesday (20/5).
“A dialogue will very much depend on whose perspective. And from our point of view as the state’s apparatus, a political dialogue is too late. It’s done. Because Papua has been part of the state of the Republic of Indonesia that is recognized by the United Nations.  So it’s recognized politically and legally, including the international law,” the Chief said in the press release received by tabloidjubi.com on Wednesday afternoon (21/5).
Therefore, he further added, what need to be done now is to promote welfare for Papuans. Any dialogue should be done in the framework of Special Autonomy through the local government and Papua’s parliament.
“Papua is similar to other regions of Indonesia, in that it is under civilian order. Therefore, the military’s task is to provide the territorial assistance and protect the public. We took our role to guard Papua in peace. For that reason, our operation is to develop trust with the community approach,” he said.
He further said the military didn’t carry out their operation by deploying troops but participating to develop the community welfare in Papua. That is the Community Base Officers (Babinsa) for among the community. Their presence is to assist the police handling the criminality or securing the situation at the border or remote areas. Their role is including assisting the community by teaching or opening the inter-village road access.
“However, if there are among them who misconducted in duty, they would be legally process. The Indonesian Military must be professional and respect to the human rights. It part of the current law of the military,” he said.
But Pungky Indarti, directress Impartial Jakarta, as the moderator of the discussion actually denied the Kasdam statement. “What are delivered Kasdam away from everyday reality in Papua, which was reflected in the process of the VI National Conference on Interfaith Network Indonesia is running at Sentani Indah Hotel,” Indarti said in the release to tabloidjubi.com. (Jubi/Aprila/rom)
----------------------------------------------------------------------------------------------------------------
A google translate of article in Majalahselangkah.com. Be-aware google translate can be a bit erratic.
Original bahasa link at

Yan Christian Warinussy ( second from left) received the British and the Dutch embassy envoy to Indonesia in his office recently. Photo : DOK LP3BH

Manokwari , STEP MAGAZINE - Director of the Institute for Research , Study and Development of Legal Aid ( LP3BH ) Manokwari , Yan Christian Warinussy in a written statement received majalahselangkah.com on Friday ( 23.05.14 ) , said Papuans need a head of state and representative able to encourage and build up continued efforts to create Papua - Indonesia Dialogue in 5 ( five ) years.

" We desperately need a head of state and his deputy were able to encourage and build up continued efforts to create Papua - Indonesia Dialogue in 5 ( five ) years into the future , " he wrote .

Furthermore Yan said , " I urge the people of Indonesia and the Papuan people and the international community to be smart to choose a candidate and Deputy Head of State who does not just have the spirit of nationalism , assertive , honest and responsible . However more important is the candidate for the Head of State and his Deputy really have a firm commitment to resolve the issue of human rights violations in the past , both in Aceh , East Timor , Maluku and Papua are always grounded from day after day . "
Especially for us in Papua , he said , people have repeatedly called for the immediate opening of Papua - Indonesia Dialogue , to seek ways of resolving conflicts that have lasted long in peace .

" It's even got a response from the President of the Republic of Indonesia , DR. H. Susilo Bambang Yudhoyono , saying that he is willing to engage in dialogue with all parties in Papua and forward approach to heart , " he explained .

However, Yan said , in fact a form of realization of the words of the President himself never seems to ahead of 4 ( four ) months longer he would put his position as Head of State .

" The question now is whether the people of Papua can put such huge expectations on one between the second and vice presidential candidate ? Are Jokowi - JK or Prabowo - Hatta that will realize the hopes and aspirations of the Papuan people's socio - political that ? "

International Prize in the Field of Human Rights ' John Humphrey Freedom Award ' in 2005 from Canada reaffirmed , solving problems of human rights violations in the past , especially ahead of , during and after the holding of free choice act (act of free choice) or Act of the year 1969 has yet to be resolved legally need to be a concern and agenda Indonesian head of state in the period of 5 ( five ) years.

Known , certainly the people of Indonesia will select two candidates for President and Vice President on July 9, 2014. They are Ir . And Dr. Joko Widodo . H. Jusuf Kalla, who is supported by a coalition of the Indonesian Democratic Party of Struggle ( PDI-P ) , the National Democratic Party ( Nasdem ) , the National Awakening Party ( PKB ) and the People's Conscience Party ( Hanura ) . 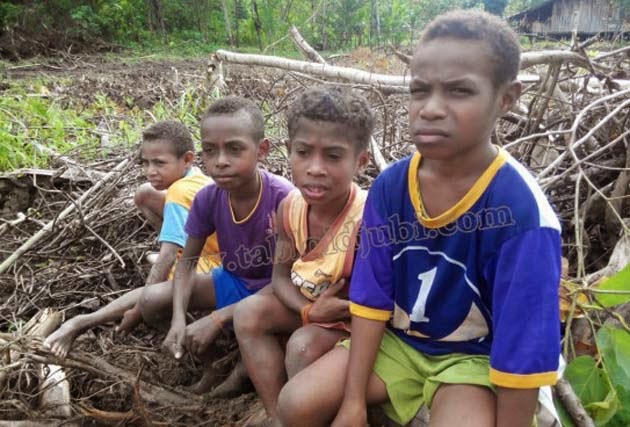 4) PORT NUMBAY PEOPLE THREATENED ON THEIR OWN LAND

Timika , 22/5 ( Jubi ) -Of five students of Elementary School SD YPPK Tipuka who  registered for exams, only three showed up.
The number indicates that there is lack of awareness of the importance of education in Kampung Tipuka.
“School and parents have done their best to motivate the kids but they have little interest in attending school,” Krisantus Saklil, Headmaster of Elementary School SD YPPK Tipuka said in Timika on Wednesday (21/5).
“We hope the number of students will increase next year. Otherwise, we will go back to approach and convince the parents again. One thing that you should know that the kids got helped to pass the school exam in two years in a row,” Saklil said.
The previous year, the participants were seven and all of them passed though they were qualified junior school level. The absence of children is not reasonable, because there is shuttle bus who take them every day even though the distance from home to school is quite far.
“It’s depend on the kids and  their future is in their hands. We could not blame the school because we have If it happens like this,” he said.
School exams were held on Monday ( 19/5 ) from 08:00 to 10:00 am. There were 156 participants consisting of 44 students from SD Inpres Nawaripi, 84 students from SD Negeri Inauga Sempan Timika, and 28 from YPPGI Meuwo.
The third principal, Marselinus Sergius , S.Ag., Fredik Korie and Peter Pakage, S.Pd , acknowledged that the students’ success will make teachers proud.
They hoped that the exams would run smoothly. ( Jubi / Eveerth/Tina )
---------------------------------------------------------------------------
http://tabloidjubi.com/en/?p=2484

tabloidjubi.com May 23rd, 2014 0 Comment
Jayapura, 21/5 ( Jubi )—Three Papua’s clans are dominating the Papua Legislative Council (DPRP), according to results from the April 9 parliamentary elections.
The clans of Kogoya, Tabuni and Yikwa are dominant not only at the regency level but also at the provincial level.
“Based on the study conducted after the announcement of the election results at the central, provincial, municipality and regency levels, we found the three Papua’s clans are very dominant. They are present in several regencies,” Mega Petrodaz, chairwoman of Papua’s Migrant Group told  tabloidjubi.com on Tuesday (21/5).
The study was held in Jayapura Municipality, the regencies of Jayapura, Mamberamo Tengah, Mamberamo Raya, Lanny Jaya, Puncak, Pegunungan Bintang and Asmat. “Agus Kogoya from Kebangkitan Bangsa Party, Deerd Tabuni from Golongan Karya Party and Elvis Tabuni from Gerindra, Bobirus Yikwa from Democratic Party are those who elected as provincial legislators. Earlier, there was Kenius Kogoya, but he’s not elected this time,” Petrodaz said.
She further said the Kogoya Clan got eight legislature seats in Lanny Jaya, one seat in Mamberamo Tengah, two seats in Jayapura Municipality. Meanwhile, the Tabuni Clan took three legislature seats in Puncak, two seats in Lanny Jaya, two seats in Jayapura Municipality, and one seat in Mamberamo Tengah. The Yikwa Clan got four representatives in Mamberamo Tengah, four seats in Lanny Jaya, one representative in Jayapura Municipality.
“It becomes interested because they were coming from the different parties. This is something extraordinary, and it seems like there’s only happened in Papua. It’s very unique, because in the tight of the competition during the election, these clans could be raised and dominant in the vote,” she said.
Meanwhile, the anthropologist from the Yayasan Lingkungan Hidup Papua, Aser Rumbroisi said this phenomenon presented the dissemination of those clans in Papua. The big community they had is not limited in their origins but also in other regions. They have strong community to assist them winning the vote.
“It’s the thing that not posses by other clans in Papua. Even some of them are big community, but they are so fragile,” Rumbroisi said. (Jubi/Albert/rom)

Australian Prime Minister Tony Abbott had to admit on Thursday that he had made a mistake for winking and smiling during a radio talk show with his host while listening to a complaint on his welfare cuts from a woman working on a phone sex line. But in the eyes of many Indonesians, the PM is not averse to being “insensitive”. According to Bloomberg news agency, the former amateur boxer was shown on national television winking and similing after a caller, who described herself as a 67-year-old pensioner with a chronic health condition, said she had been forced to work on an adult sex line to pay her bills. Thousands of Australians have protested his plans to cut spending and increase taxes, which also go against his own campaign pledges.The conservative leader won a landslide election victory against the Labor Party’s Kevin Rudd just eight months ago in September. Voters were spellbound by his pledge to lead “a government that says what it means, and means what it says”, including much better welfare, more generous medicare and a tax policy that would not hurt the general populace. Voters were also lured by his determination to take tough measures against boat people from troubled countries, who had become a serious challenge for Australia. Abbott was confident that his zero-tolerance policy against Indonesia, which many Australians believed was primarily responsible for the influx of unwanted asylum seekers to their shores, would be a very effective measure to block the asylum seekers. The policy has indeed drastically reduced the human flow but at a cost to other nations, including Indonesia. If elections were held today, some reports say, the Labor Party leader, Bill Shorten, would easily win, barely a year after voters decided to end the party’s six years in power. Relations between Indonesia and Australia quickly deteoriated after Abbott came to power, as he demonstrated he was going to be much tougher with his neighbor than the Labor Party had been. In so doing, he is perceived by many Indonesians to be extremely arrogant.If his coalition holds onto power, Abbott will soon have to deal with our new leader, either Joko “Jokowi” Widodo or Prabowo Subianto. It is unlikely that he will face such a friendly and accomodating president to Australia as the incumbent, President Susilo Bambang Yudhoyono.Winking and smiling while listening to Indonesia’s complaints will cost him diplomatically.
Posted by AWPA Sydney News at 3:09 PM