Mon, May 12 2014 23:20 | 375 Views
Jakarta (ANTARA News) - A Papuan community leader, Nicolaas Jouwe, said the Netherlands officers created the Free Papua Movement (OPM) in 1965, to oppose Indonesia and disturb the security of eastern Indonesias territory."I am a leader of the National Liberation Council of West Papua. I am not OPMs member. In fact, OPM was created by Netherlands officers in 1965 to coincide with the crackdown on the Indonesian Communist Party," Jouwe said during a lunch organized by ANTARA News Agency in Jakarta on Monday.In the lunch that was held for a journalist of Australian TV SBS, Mark Davis, Jouwe said the Netherlands officers trained the Papuan youths to become volunteers in fighting Indonesia."The Papuan youth who had been trained were then asked by the Netherlands to establish the OPM," Jouwe noted.Jouwe, born in Jayapura on November 24, 1923 and who had designed the Bintang Kejora (Morning Star) Flag, also explained conditions in Papua after more than 50 years of integration with the Unitary State of Indonesia, since the United Nations Temporary Executive Authority (UNTEA) handed over the governance of West Papua (used to be called Irian Jaya) to Indonesia on May 1, 1963.According to Jouwe, the people of Papua still are getting used to being Indonesian citizens, as he added, "They still feel awkward and a little bit different."But, Jouwe underlined that the Papuan peoples state of minds cannot be separated from the Netherlands treatment, who had isolated and banned them from attending schools since the Orange Kingdom colonized the land in 1828 until independence was proclaimed by Soekarno and Hatta on August 17, 1945."During the 117 years, we the people of Papua practically lived in the Stone Age," he said.The obsession of Jouwe with the struggle for Papuas development was captured in a book titled "Nicolaas Jouwe Back to Indonesia: Step, Thought and Desire" that will be published in 2014.On Jouwes book, the figure who used to oppose Indonesia, said he had come back to the Unitary State of Indonesia marked by his visit to Jayapura, Papua, in 2009, to support Papuas development, after tens of years of living in the Netherlands.Meanwhile, during his stay in Indonesia, Mark Davis will organize an investigative report in Jayapura between May 6 and May 11, 2014. (*)

Jakarta (ANTARA News) - Indonesia and Papua New Guinea (PNG) agreed to reopen the Skouw-Wutung border, after it was closed for the cross-border traffic between the countries due to the attack by a civilian armed group on April 5."We still have not determined the date to reopen our border. We leave the date to the security and immigration authorities of the two countries. But basically, it will happen shortly," Indonesian Consul in Vanimo, PNG, Jahar Gultom, said here on Monday.The reopening of the Skow-Wutung border, which is economically and socio-culturally beneficial for the two countries, was agreed during a bilateral meeting in Bali in May 8-9."In normal conditions, the border gate is opened three times a week on Tuesdays, Thursdays and Saturdays. The number of PNGs citizens who enter our territory can reach thousands of people," Gultom said. The cross-borders trade from PNG with the Indonesia includes food, beverages, clothes, construction components and electronics, with total transactions worth U.S. 13 million dollar per year."Our merchants profit from PNGs citizens who shop in our markets," Gultom said.The delegations of Indonesia and PNG also agreed to establish a coordinated patrol between Indonesian Military and PNGs to maintain security and stability in the Skouw-Wutung border area. (*) 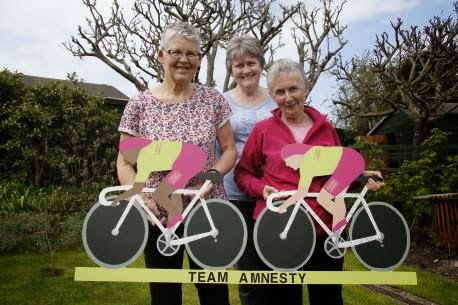 Alison Tribe, Anna Young and June Brennan with the Silsden Amnesty bike display
An Indonesian prisoner-of-conscience has been nominated as a Tour de France ‘rider’ by Silsden human rights campaigners battling for his release.
Filep Karma has been declared the leading rider in Team Amnesty, a cycle display that will form part of Le Bike Festival being staged at Silsden Methodist Church in July and August.
Mr Karma, a former civil servant born in Papua, was jailed for 15 years in 2005 after he attended a ceremony in which the Papuan flag – banned in Indonesia – was raised.

A google translate of article in Msajalahselangkah.com. Be-aware google translate can b e a bit erratic.
Original bahasa link at
http://majalahselangkah.com/content/ksad-tni-jelang-pemilu-presiden-papua-rawan-gpk
4) TNI Chief of Staff : Ahead of Presidential Election , Papua Prone GPK
Author : Admin MS | Monday, May 12 2014 15:22 Read: 360 Comments : 3
Ilustrasai . Photo : www.republika.co.idTherefore , Papua is one of the priority areas of security . " Army will assist the police in maintaining security during the presidential election . Territorial We will prepare the apparatus , ranging from Babinsa , Koramil , Korem , District Military Command , until the military command , " he said .
Jayapura , STEP MAGAZINE - TNI Chief of Staff Gen. Budiman , on the sidelines of his visit to Military Academy ( Akmil ) Magelang , Friday ( 09/05/2014 ) and then , as quoted by Reuters , said Papua is a region prone to motion towards the security vandals Presidential Election .
Approximately 35,000 soldiers of the army personnel will be deployed to secure the implementation of the Presidential Election ( Election) 2014. They will be made ( BKO ) to the police in charge of maintaining security before and after the presidential elections next July .
According to him , the security has been conducted since the implementation of the legislative elections ( Pileg ) last April 2014 .
Furthermore , the security will be done before the presidential election until polling and when the conditions are really favorable . This act as soldiers for the unity of responsibility and sovereignty of Indonesia .
Known , GPK term used by the military to refer to rebels of the Free Papua Movement ( OPM ), which is in Papua . OPM in Papua identifying themselves as the National Liberation Army - West Papua ( TPN - PB ) . ( GE / IST / MS )