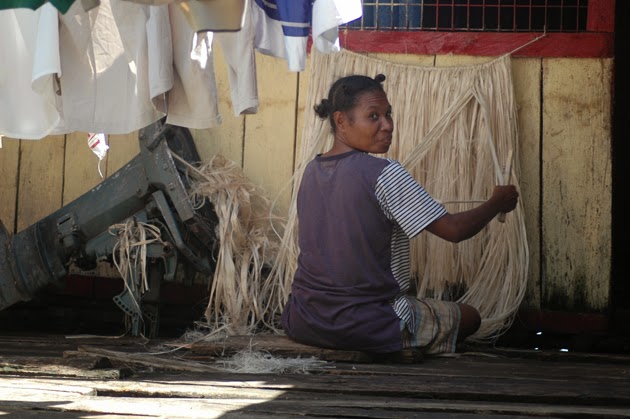 Nothing change for Papuan Women, must struggling for their family (Jubi)

Sentani, 26/5 (Jubi) – Ten years of the Yudhoyono administration has not brought any changes to Papuans, a seminar was told.
Therefore Papuans must unite to build their region if they want to be involved instead of being the spectators. This is the part of the seminar conclusion on “What President Susilo Bambang Yudhoyono Has Done during Two Periods of His Government for the People of Papua” organized by the Association of the Papua’s Central Highland Students. The seminar was held at Romongo Pos 7 Baptism Church in Sentani, Jayapura Regency on Saturday (24/5).
Markus Haluk presented twelve violations including severe torture, arbitrary arrests, shootings and killings, rape, burning and destruction of citizens’ properties, bans on peaceful demonstrations, denial of arrest warrants, detention of Papuan civilians accused of treason, access restrictions to members of Parliament, Congress and Foreign Diplomats, restrictions and warnings against international journalists, local and national media and also the threats against human right defenders.
Arbitrary arrests are the most common rights violation, involving 560 Papuans and 5 foreign citizens.
“The government has failed to develop Papua, therefore Papuans should be aware about who’s their friends and enemies. Do not make enemies partners, it would make us hurt,” Haluk said.
Another speaker in the seminar,Theo Kossay, a lecturer of Fajar Timur Theology School and Papuan Anthropologist, talked about the impact of the splitting of regencies/municipality/province on Papuans. In his paper titled “The Rise of the Regency and Provincial Division Threatens the Extinction of the Indigenous People and the Native Culture of Papua”, he said the Yudhoyono government has produced 84 New Autonomous Regions (DOB), some already established. Another impact from this policy is migrants through transmigration, urbanization or migration who seeking parts in the new extension regions. The extension and migrant would affect to the loss of the human and the cultural identity in Papua.
While Bruder Eddy OFM on his paper titled “The Condition of The Indigenous Papuans Related to the Protection on the Basic Rights during Ten Years of Yudhoyono Leadership (2004-2014)” described the economic, social, cultural, political and security issues in chronological order. He concluded the State’s point of view towards the people of Papua has not been changed from the sixties era, because the stigma, terror, killing, arrest and rape are still exist in the Papuan people’s life.
Fien Yarrangga also said the similar case on her paper “The Gender Enforcement and the Protection and Respect towards the Papuan Women Rights during the Yudhoyono Government”. She said there was not a significant change because the Papuan women traders are still have their own place; besides the stigma about they are parts of the Papua Free Movement.
Meanwhile the Rev. Sofyan Yoman in this occasion emphasized the Papuan students to be more critical in writing, collecting and analyzing data.
“I do not speak about the issues that have been talked the previous speakers that essentially said that Papuans never been independence when the colonialism keep going. We have pushed in our land either by the investors or those who have interest in this land. Therefore we must be aware on this situation and start to arrange our next step. The most important is we should united and collect some data to reveal to the world that along with the Indonesian Government we had no changes,” he said.
The five resource persons agreed that during ten years of the Yudhoyono government, it did not give a significant contribution though there are the Special Autonomy Law, the Development Acceleration Unit of Papua and West Papua (UP4B) and some New Autonomy Region (DOB). This indicates no matter who’s the president, without the alteration of the approach pattern, it wont be change Papua. Through this seminar, the speakers also suggested to the youth and Papuans making documentation on all occasions to support the humanitarian works. ( Jubi / Mecky/rom )

Yudhoyono will be in the country as chief guest of the Pacific Islands Development Forum (PIDF) second summit to be held in Nadi from June 18- 20.

Prime Minister and PIDF chairman Rear Admiral (Retd) Josaia Voreqe Bainimarama had extended an invitation to President Yudhoyono to be the chief guest at the summit, which will focus on “Green Growth in the Pacific: Building Resilient Sustainable Futures and Genuine Partnerships.”

Prime Minister Bainimarama said “the President’s involvement in the event signals the growing importance of the PIDF in the region for issues such as sustainable growth and development.”

President Yudhoyono's address to the PIDF will provide the Pacific with a rare opportunity to discuss a global report on global partnership in trying to eradicate poverty through sustainable development.

The summit will be the second to be held in Fiji following the formation of the regional group last year.

The Papua administration will map land boundaries in Timika to prevent further communal conflict in the province.As of May, communal conflicts had claimed the lives of 17 people and had injured hundreds of others as well as causing material damage.A survey team on the indigenous rights of traditional communities in Mimika has been formed to conduct the mapping. They comprise the Mimika Land Agency, the Papua legislature, Mimika regency council, LEMASKO, LEMASA and LMA (Papua traditional community institutions), the Papua People’s Assembly (MRP), legal experts and archeologists from Cenderawasih University as well as traditional elders from disputing groups.“The team has been working for the past month and was given three months to complete the mapping of the concerned borders. As the issue is about boundaries, the core of the problem must be resolved,” said Papua Governor Lukas Enembe in a meeting between the provincial administration and disputing groups at Gedung Negara in Timika, on Monday.“Land disputes have turned into bloody conflicts, in which people kill one another, whereas the Papuan population is already dwindling. If they continue to kill one another the population will decrease further,” he added. The meeting was also attended by Papua Police chief Insp. Gen. Tito Karnavian, Cenderawasih Military Command chief Maj. Gen. Christian Zebua, Papua legislative speaker Derk Tabuni, MRP deputy head Angel Tokorok, Papua Police deputy chief Brig. Gen. Paulus Waterpauw and 16 regents from Papua’s Pegunungan Tengah region.The conflict is said to stem from a territorial dispute in Kali Pindah-Pindah, Iwaka subdistrict, Kuala Kencana district, Mimika. The area of contention is included in the concession of the PT PAL (Papua Agro Lestari) oil palm plantation located in the area of the Timika-Enarotali (Paniai regency) highway project.The Dani tribe claimed the area as the native right of the Komoro tribes that was entrusted to them, while the Moni tribe also claimed the same right.Besides hearing the research conducted by the working team on indigenous rights in Mimika conveyed by Cenderawasih University’s law school lecturer Frans Reumi, the meeting also heard the aspirations of both disputing groups. Both groups, mediated by LMA head Lenis Kogoya, wished for peace, but still focused on people’s rights. They demanded compensation for their damaged belongings and loss of life.Legis said in the mapping, areas later inhabited by the seven tribes in Timika would be determined and it would not neglect the native rights of the Komoro and Amungme tribes.“The mapping will include the areas which will be inhabited by the tribes in Timika so as to prevent land disputes. It will place the Komoro and Amungme tribes as owners of indigenous rights,” said Legis.Lukas said the government had not prepared compensation for the loss of lives but in accordance with Presidential Instruction No. 2/2013, the conflict would be resolved by reconciliation, rehabilitation and reconstruction.“The government will provide grants to help victims, but will not compensate for loss of life,” he added.In the meeting, it was also declared that both sides were called upon to stop the conflict and seek a fair solution.“The police will take stern measures against those fighting. I call on everyone to help the team complete its work,” said Papua Police deputy chief Brig. Gen Paulus Waterpauw.

Timika, 25/5 (Jubi) – Governor Lukas Enembe and the regents of the Central Highland Regions and the Papua Police and Military Officials was to visit Timika, Mimika Regency on Monday (26/5) to try to resolve a recent tribal conflict.
Acting Mimika Regent Ausilius You said the government mission was also to review the current development activities in Mimika Regency.
“The Governor was due to be accompanied by the Central Highland Regents’ Association and provincial government officials,” he said to reporters at Pendopo Rumah Negara in Karang Senang Village, SP3 Timika on Sunday (25/5).
He further said the Governor’s main agenda is reviewing the current development activities of Mimika Regency, including seeing the process of the political phase and meeting with people who have been embroiled in the conflict to listen their aspirations.
He said the visit was to prove the government’s interest to immediately resolve the people’s conflict in Djayanti.
“Earlier, we made efforts to resolve the conflict by approaching the two parties through the customary and religious leaders As a result, there have been several inputs provided by both sides” he said.
According to him, the local government also has established a special team to resolve the conflict in cooperation with the police and military, community leaders, customary landowners, and the tribal chief commanders of both parties and the village government apparatus. He hoped the Governor’s visit would positively contribute to the conflict resolution.
Meanwhile the Regional Secretary of Province Papua, Herry Dosinaen said 16 regents of Central Highland Region have agreed to be mediators to the conflict in Mimika. They will hold a Regional Heads Communication Forum meeting on Monday (26/5) to seek a peaceful resolution.
“It’s not only this time the Provincial Government of Papua took action, but earlier the local Heads Forum has came directly to see what was happened on the ground. The action was under the supervision of the Papua’s First Assistant together with other forum’s members including the Papua Police Chief, Military Commander, People’s Council and Papua’s Legislators,” he said on Saturday (24/5).
According to him, two weeks ago the Governor asked his office to send a radiogram asking the sixteen regents of the Central Highland Region to come to Mimika. The Provincial Government also has appointed a special team consist of the representatives of government, the police and military, religious and customary leaders and other components to see the progress in Mimika. (Jubi/Eveerth/rom)
Posted by AWPA Sydney News at 2:26 AM