The Special Committee on Decolonization will hold its Pacific Regional Seminar in Nadi, Fiji, from 21 to 23 May 2014.

Joe Collins of AWPA said " We are calling on the Committee to visit West Papua on a fact finding mission to investigate how the West Papuan people have fared under Indonesian rule. The Special Committee visited   New Caledonia in March 2014,and we believe the UN should now visit West Papua.  It is an accepted fact that the so called act of free choice in 1969 was a farce and the UN has a moral responsibility to the West Papuan people for that tragic event, the betrayal of a people back in 1963".

Joe Collins said "it is definitely time for the UN to revisit the whole question of the handover of West Papua to Indonesia 51 years ago. 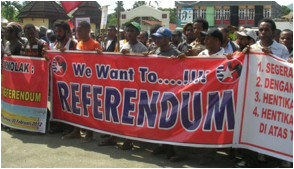 Posted by AWPA Sydney News at 4:11 AM