For the Presidential Election ( Election) Indonesia later , our political views and attitudes clearly , has not changed , not wishy - washy , and do not twist . Namely , Indonesian presidential election is on the agenda of the colonial state in Indonesia that must be addressed with rejection and civil resistance through boycotts to all the people of Papua , on the territory of West Papua .

Papuan peoples struggle for self-determination are at a clear and unequivocal . Not in the position of gray . Therefore , we will not get carried away in the current political euphoria colonial Indonesian state -owned . That means , we do not have an interest and concern in assessing , supporting , let alone choose one candidate for President of Indonesia , as good and as bad as any candidates and the vision - mission .

The structure and tools Indonesian colonial rule over the territory of West Papua , with the power of the media , being conditioned systems of thought and attitude awareness of the nation of Papua into Indonesia's colonial hegemony . Through TV , radio , newspapers , and the Internet they incite the people of Papua . They promise the illusion that the programs will not work , and had not managed to run for 52 years on the land of Papua .

The focus today is the nation of Papua solidify civilian ranks stiff resistance at all levels . Talk to your friends struggle against colonialism in school / college , your family at home , in the church congregation , and elsewhere . Invite them to discard the illusions in colonial Indonesia, and fighting to save the nation from the threat of colonial Indonesia. Calls , spread and resistance waged Papuan civilians that do not participate ( boycott ) on the Indonesian presidential election later colonial possession .

We Must End
Because the remaining remnants

victim
Merauke, KNPBNews - Today, Saturday (24/5) local time, there has been a Member arrest of two activists on behalf Payum KNPB Sector Ferdinandus Blagaize and Celestine Blagaize in Kampung Okaba Okaba Merauke District by members of the Police Okaba. Those two were arrested as a result of carrying leaflets and history
books Papua referendum aimed to socialise  to people in the village Okaba which is also the hometown of their own. Until now, the news raised two are still being held in police station cells Okaba. 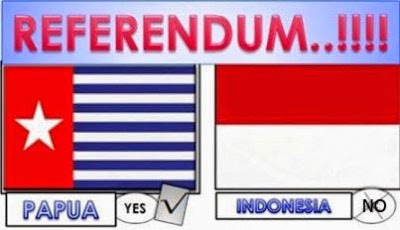 Referendum leaflets that they under.