More mass arrests at West Papuan demonstrations are clouding Indonesian government claims that it is trusted by indigenous people of Papua region.
Yesterday was the 55th anniversary of the first official raising of the Papuan nationalist Morning Star flag when the indigenous people of the former Dutch New Guinea declared independence.
The Morning Star was subsequently banned after Indonesia took over, but each year global rallies mark this anniversary in support of Papuans.
Johnny Blades reports.

This year, non-Papuan Indonesians were among the hundreds demonstrating in Jakarta. They were blasted by water cannons, before police arrested 203 of them. A public interest lawyer who was present, Veronica Koman, says demonstrators were roughed up by undercover police, and that ten of those taken in by police sustained injuries. They were all released without charge within a few hours, but Ms Koman says the arrests follow an ongoing pattern of infringement of constitutional rights.

Thursday's demos also occured in Papua region itself, mainly as prayer events and under the tight watch of police. Unlike December 1st demos in global centres such as London and Sydney, the Papua events were not allowed to feature raising of the Morning Star. Two days earlier a new organisation called the Indonesia's People Front for West Papua declared support for a legitimate self-determination process. Its spokesman Surya Anta was among those arrested in the capital

Although Jakarta says it is final, 1969's Act of Free Choice under which Papua was subsumed into Indonesia, voted on by only 0.2 percent of its population, remains a core grievance for Papuans. Mr Surya says if Indonesian and Papuan people can work together, and combine with international pressure, it is realistic that Jakarta can be encouraged to address the question of legitimacy. However the government prefers to focus on its economic development efforts in Papua, which include a major infrastructure drive taking in remote regions. The government's official on development in Papua, Judith Dipodiputro says in grassroots communities there is a growing sense of positivity about  the opportunities opening up.

"Most of my work is at the village level and I see this willingness, this positive wanting to... (like) this is the time, what can we do; creativity, wanting to innovate, try this, try that. Papuans in Papuan villages try to serve themselves with the help of the district, or Kabupaten (regency) or municipal or provincial government."

Yet Veronica Koman says that as far as Indonesia's general public is concerned, the state has long censored accurate information about Papua.

"And we in Jakarta are really campaigning, letting Indonesians know what's actually happening in West Papua, and also the history of manipulation by state. So people are opening their eyes, and it's growing, the solidarity is definitely growing."

She says since April this year, police have made 4,800 arrests of people participating in demos in support of West Papuan self-determination.
————————————————————-
http://www.radionz.co.nz/international/pacific-news/319478/flag-day-in-papua-takes-form-of-prayer-events,-petition
2) Flag day in Papua takes form of prayer events, petition
8:40 pm on 2 December 2016
Events held in the cities of West Papua to mark the anniversary of the Papuan nationalist day mainly took the form of prayer events. 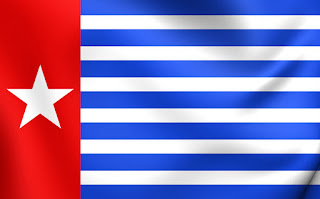 Yesterday was the 55th anniversary of a declaration of independence by the indigenous people of the former Dutch New Guinea declared independence.
The Papuan nationlist Morning Star was subsequently banned when Indonesia took over, but each year global rallies mark this anniversary in support of Papuans.
In Papua, the biggest of yesterday’s events was in the Highlands town of Wamena where 3000 people converged for a large prayer event at the Traditional Council headquarters.
Benar News reported that organisers of the event thanked the Indonesian authorities for permitting the opportunity to worship.
Among the speakers at another peaceful event, across in Papua's provincial capital, was Filep Karma.
Mr Karma was released from prison a year ago after serving eleven years for raising the Morning Star in 2004.
At the Jayapura event, hundreds signed a petition in support of the United Liberation Movement for West Papua with its growing representative role in the Pacific region.

Unlike December 1st demos in global centres such as London, Sydney, the Papua events were not allowed to feature raising of the Morning Star.
"Papuans are already aware and do not want to be provoked by violence and conflict," Mr Karma was reported as saying.
“Prayers and speeches such as these show political maturity and a dignified struggle."
The event also heard a speech written by the Liberation Movement secretary-general Octo Mote.
He said Indonesians "are starting to acknowledge that crimes have been committed by the government and military of Indonesia in Papua".
In Jakarta police arrested over two hundred people for participating in a demonstration in support of West Papuans' right to self-determination.
14 were arrested in the other Indonesian city of Yogyakarta.
—————————————————
http://www.thejakartapost.com/news/2016/12/02/world-stands-with-78-million-hiv-positive-people-unaids.html
3) World stands with 78 million HIV-positive people: UNAIDS
Jakarta | Fri, December 2 2016 | 08:50 am
Awareness: Volunteers from NGOs campaign for HIV/AIDS awareness in Sorong, West Papua, on Thursday. West Papua is reported to be the third-ranked province in Indonesia in terms of HIV/AIDS prevalence, with Sorong being the city with the highest number of cases at 1,841 as of this year.(Antara/Olha Mulalinda)
In commemorating World AIDS Day on Thursday, the Joint United Nations Programme on HIV/AIDS (UNAIDS) executive director Michel Sidibé said the international community stood “in solidarity with the 78 million people who have become infected with HIV”. With this year’s theme of “Hands Up for HIV Prevention”, the world also remembers “the 35 million who have died from AIDS-related illnesses since the first cases of HIV were reported”, the UN under-secretary-general said on the UNAIDS website.Today, “more than 18 million people are on life-saving HIV treatment and country after country is on track to virtually eliminate HIV transmission from mother to child”, Sidibé added.However, the number of new infections of HIV “is not declining among adults”. Sidibé cited young women in sub-Saharan Africa who face the triple threat of a high risk of HIV infection, low rates of HIV testing and poor adherence to HIV treatment.On Wednesday UNAIDS in New York awarded UN Secretary-General Ban Ki-moon for his leadership in “reducing the impact of HIV and expanding access to health for millions of people”, said Sidibé. “He has been consistent in his support for the most vulnerable [...] and remains a staunch human rights defender for the people most affected by the epidemic.” Reports cited stigma as a major reason for low rates of HIV testing.From Manila, the Philippine Daily Inquirer reported on Thursday that a senator, Risa Hontiveros, underwent HIV testing at the senate on Tuesday to not only raise awareness about the virus but also to encourage the public to take the test, which she said was free at social hygiene clinics.An HIV test, Hontiveros said, could spell the difference between life and death. “It’s important that all individuals should be open to undergoing a voluntary HIV test especially now that our health authorities are saying that one out of two people with HIV are not aware of their disease so we need this kind of information for our safety, so we can save our lives and become healthy,” she said.“We need to break down this barrier that prevents Filipinos from getting tested, especially that one in two persons living with HIV is not diagnosed,” Hontiveros, chairperson of the senate committee on health and demography, said in a separate statement.The senator cited a Department of Health report that said there were 25 new cases of HIV infection every day in the Philippines.Hontiveros is also pushing to lower the age of those allowed to take the HIV test, from the present 18 years old to 15 years old and above.“If HIV testing would be opened to youth as young as 15 years old, then they would no longer need parental consent,” she said. Young people are seen at the losing end of the fight against HIV, with Hontiveros citing some adolescents’ “risky behavior”, which she said could lead to the spread of the virus.Also on Thursday, Reuters reported that China’s first lady and World Heath Organization HIV/AIDS prevention goodwill ambassador attended an event at a Beijing university on Tuesday to raise awareness among students. Over 2,300 students between 15 and 24 tested positive for HIV/AIDS in the first nine months of this year, with new cases in the group increasing four times since 2010, according to the Chinese Centre for Disease Control and Prevention, Xinhua News Agency reported.From Laos, the Vientiane Times reported that the health ministry and development partners had set up 168 centers countrywide to provide free consultations and HIV tests.
—————————
http://www.heraldsun.com.au/leader/north-west/inspirational-farm-girl-from-greenvale-immortalised-in-print/news-story/5120ab3623fd03ca674113db661f93ee
4) Inspirational farm girl from Greenvale immortalised in print
Alesha Capone, Hume Leader November 29, 2016 12:00am
THE inspirational life of Jessie Williamson, a Greenvale farm girl who became a missionary nurse, is the subject of a new book.
Brisbane writer John Algate has penned Jessie’s House of Needles, about a little-known but extraordinary woman.
Jessie was born as Roseabel Jessie Williamson in 1938, the ninth in a family of 10 children.
Jessie’s mother and father lived in Greenvale, which was a small farming community at the time.
As a youngster, Jessie attended the Greenvale Primary School.
A childhood accident left her with a hearing impairment, but she graduated from Essendon High School and became a nurse.
Mr Algate’s biography about Jessie details how she chose to leave a successful medical career in Melbourne to face the dangers and uncertainty of life in the remote villages of West Papua, between 1966 and 2001.
“For 35 years, Jessie served the Dani, Kimyal and other indigenous people of the region where she nursed, evangelised and built networks of local medics and midwives who continue her lifesaving work today,” Mr Algate said.
In 1998, Jessie was honoured as a Member of the Order of Australia in recognition of her services to international humanitarian assistance.
Jessie passed away two years ago, after a three-year fight against leukaemia.
Jessie’s House of Needles by John Algate is published by Ingram Spark.
The recommended retail price for the paperback edition is $19.95.
An e-book is also available.
———————-
Posted by AWPA Sydney News at 11:56 AM