Summary of events in West Papua for November -7 December) 2016)

On the 1st December in 1961, the Morning Star was flown for the first time officially beside the Dutch Tricolor.  The Dutch were finally about to give the West Papuan people their freedom. However it is one of the great tragedies that at their moment of freedom it was cruelly crushed and West Papua was basically handed over to Indonesia in 1963.

Fifty five years later, in a global day of action the Morning Star was raised around the world in an inspiring show of support for the people of West Papua. It is greatly encouraging to see this huge groundswell of support around the world and in particular in our region on the issue. This support includes Civil Society Organisations (CSO), churches, governments and individuals who raised the flag in great numbers on the 1st December. 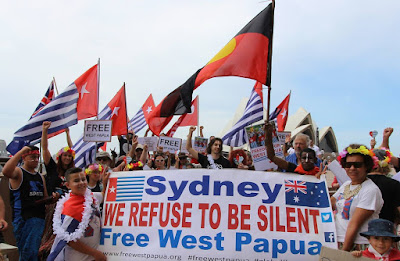 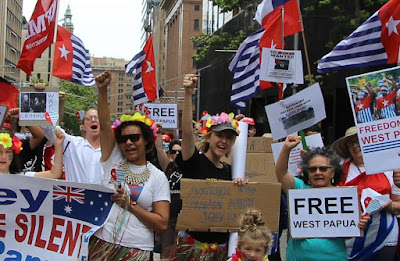 In Sydney, supporters for West Papua marched from the Sydney Opera House to Sydney Town Hall on the 4th December where speakers included Rex Rumakiek, one of the spokespeople for the ULMWP. As well as the numerous speakers the rally included traditional song and dance. Another inspiring event and congratulations to all involved.


Video footage of the Sydney march and other actions at bottom of update. Photos at
http://awpasydneynews.blogspot.com.au/2016/12/photos-of-west-papuan-march-rally.html On the 1st December in Sydney individuals and groups also raised the flag including at the Indonesian Consulate.

In another encouraging and courageous move the Jakarta Post reported (29 November) that a new civil society group, The Indonesian People’s Front for West Papua (FRI-West Papua), consisting of non-Papuan Indonesian activists and intellectuals, was established as a form of solidarity from non-Papuans regarding the constant oppression suffered by Papuan activists who have fought for independence.
"There is no happiness for Papuans as long as they are part of Indonesia," the alliance’s spokesperson, Surya Anta, said in a press conference held at the Jakarta Legal Aid Institute (LBH) on Tuesday 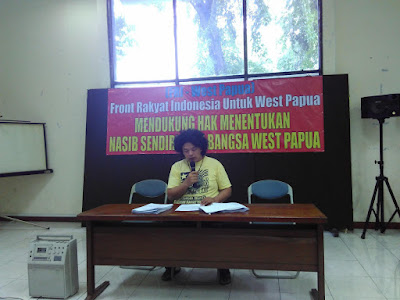 Fight for freedom: Indonesian People’s Front for West Papua spokesperson Surya Anta speaks to reporters at the Jakarta Legal Aid Institute (LBH) on Tuesday to declare the group’s support for Papuans to exercise the right to self-determination. (JP/Fachrul Sidiq) http://www.thejakartapost.com/news/2016/11/29/group-supports-referendum-for-west-papua.html

In another Jakarta Post report the group’s spokesperson Surya Anta said the need for a referendum was a consequence of abuses carried out by the government that have resulted in a persistent lack of welfare in the region. “It’s not possible for West Papuans to live normally if manipulation and deceit of history still persist, racial discrimination is deeply entrenched in every aspect of their lives, the slow-motion genocide continues systematically and extortion of natural wealth destroys their livelihoods and culture,” Surya told a press conference at the Jakarta Legal Aid Institute (LBH Jakarta) in Central Jakarta.

Police apprehended several people from the group who were participating in a peaceful rally to demand a referendum for West Papua on the 1st December. One of the people arrested was the coordinator of the rally, Surya Anta, a lawyer for the rally participants, Veronica Koman, said on Thursday. Veronica said the protesters were beaten and arrested by police officers who wore civilian attire on Jl. Imam Bonjol in Central Jakarta when they were about to head to the Hotel Indonesia traffic circle, located a few meters away from the scene. "We may report the police because we saw many procedures the police violated. They beat and arrested [participants] without wearing police uniforms," Veronica said. Veronica said she was not sure how many of the participants had been arrested, but said there were no more than five. 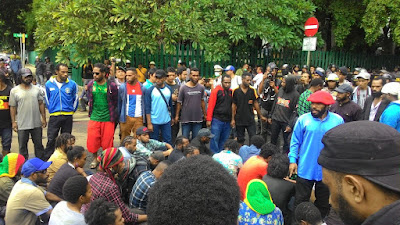 Participants of a rally held to demand a referendum for West Papua gather on Jl. Imam Bonjol in Central Jakarta on Thursday. Some of their colleagues were arrested during the event. (JP/Safrin La Batu) http://www.thejakartapost.com/news/2016/12/01/participants-of-west-papua-rally-arrested.html


But she said the arrests follow the pattern seen in the large demonstrations across Papua region in May and June, where authorities violate citizens' right to freedom of expression. 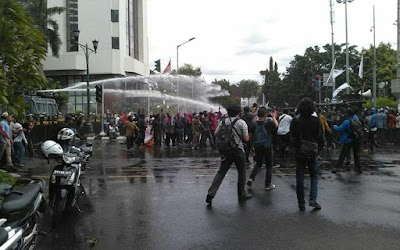 There were a number of gatherings in In West Papua itself. In Wamena up to 3000 people gathered for a large prayer event at the Traditional Council headquarters (RNZI 2 Dec.) At an event in Jayapura hundreds of people signed a petition in support of the United Liberation Movement for West Papua with its growing representative role in the Pacific region. 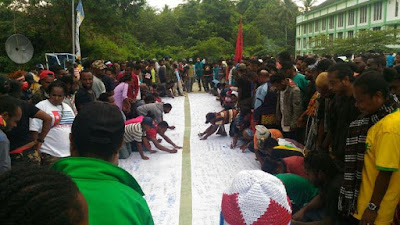 Thousands sign petition message in support of the United Liberation Movement for West Papua movement in the Pacific and at the UN. Photo: Supplied
http://www.radionz.co.nz/international/pacific-news/319478/flag-day-in-papua-takes-form-of-prayer-events,-petition

In Sorong on the 19 November a total of 106 activists of the West Papuan National Committee (KNPB) were arrested by the police as they celebrated the eight anniversary of their founding of the KNPB. The KNPB said the police took those arrested to Sorong Police office for questioning. Later, they released 99 people and detained the other seven.  The Sorong Police ch
ief Adj. Sr. Comr. Edfrie Maith said the seven were detained for 24 hours for questioning and then released but they had to report daily to the police.

On the 26 November, 14 activists from the West Papua National Committee (KNPB) were arrested in Manokwari for handing out leaflets about an upcoming rally to be held on the 1st December.  AWPA letter to Foreign Minister Julie Bishop http://awpasydneynews.blogspot.com.au/2016/11/media-release-awpa-letter-to-aust.html

Call for Vanuatu to seek seat on UN committee of 24
RNZI 2 December 2016
A former Vanuatu Prime Minister Barak Sope wants Vanuatu to become a member of the United Nations Special Committee on Decolonisation to counter Indonesia's influence. Barak Sope said Indonesia is only on the committee to ensure the subject of self-determination in West Papua is not discussed.
Vanuatu is one of the strongest supporters of Papuan self-determination and Mr Sope has been one of the strongest advocates. He said Vanuatu has a right to sit on two UN committees and should push to have its say on what is known as the Committee of 24. "The reason why Indonesia is there is to prevent West Papua's case. That is all they are doing - always wanting to be in that top committee to ensure that West Papua is not discussed in that committee," he said.
"That is why it is important that we have countries that would support the idea of West Papua to get independence and the proper way of doing it is to be on the Committee of 24." While West Papua is not on the list of 24 territories being considered for independence, six Pacific territories are on it - namely French Polynesia, New Caledonia, American Samoa, Guam, Tokelau and Pitcairn.

MSG committee mulls over membership guidelines
RNZI 25 November 2016
A Melanesian Spearhead Group committee is meeting in Port Vila to consider guidelines around membership in the regional organisation. The Sub-Committee on Legal and Institutional Issues was tasked by MSG leaders at their Honiara summit in July to clarify guidelines for observer, associate and full membership in the group. This comes as the MSG's five full members - Papua New Guinea, Fiji, Solomon Islands, Vanuatu and New Caledonia's FLNKS Kanaks Movement - grapple with whether to grant full membership to West Papuans.

The United Liberation Movement for West Papua was granted observer status in the MSG last year but its bid for full membership has been deferred pending clarity on the guidelines. Indonesia, which has associate membership status in the MSG, has opposed the Liberation Movement’s bid, saying its own involvement in the group covers West Papuans. Opening the two day meeting at the MSG secretariat, a Solomon Islands Foreign Affairs official, William Soaki, suggested the guidelines needed to contribute to the overall objective of the group. It echoed recent comments by Vanuatu's Prime Minister Charlot Salwai that since last year MSG membership criteria had been developed which did not reflect the group's founding principles, which were about decolonising Melanesia. Mr Soaki said guidelines were required to provide a more streamlined and clear scope for leaders to use in assessing expressions of interest for some form of membership in the MSG.
The Director General of the MSG Secretariat, Amena Yauvoli, encouraged the committee to provide "a workable resolution going forward".
He said the deliberation of the committee was "pivotally important for the future of the organisation" as the issue of West Papuan membership could make or break the organisation. Pending development of the guidelines, a leader summit was expected in the next couple of months to make a decision on the Liberation Movement’s application.

How mining and the military created an HIV epidemic in Indonesia’s Papua
https://www.irinnews.org/special-report/2016/11/21/how-mining-and-military-created-hiv-epidemic-indonesia’s-papua


RI and the Pacific: A history of cooperation