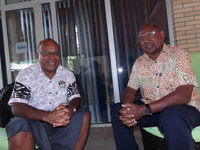 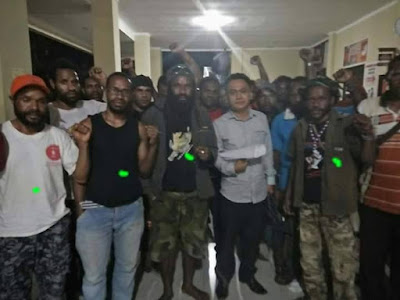 Hiskia Meage along Attorneys from LBH Manado. (Doc KNBP Gorontalo)
JAYAPURA, SUARAPAPUA.com - Four activists KNPB Consulate Gorontalo, North Sulawesi, Manado student who also has been named as a suspect and threatened with Makar article. Four activists were arrested on December 19 along with 83 activists KNPB Gorontalo.
"Yes, we were detained when the peaceful protest by KNPB consultant Manado and Gorontalo on 19 December. Of the 85 mass action, we (81 people) discharged, and four people were detained in the police station and has been named as a suspect (article treason), "John said when contacted suarapapua.com Payage, Friday (23/12/2016) from Jayapura.
John continued, "Four people were detained and to this day he has been named as a suspect by Article Makar, so we will wait for the next process. Which is named as a suspect by Article treason is, Hiskia Meage Chairman of the Indonesian Consulate East, Eman Ukago Chairman KNPB Gorontalo, Panus Hesegem members, and Arni Wetipo members. They have already established treason. "
Described in a written statement received this media, the arrest occurred before the mass action of holding a rally in the North Sulawesi provincial assembly. Mass action were preparing in Dormitory Papua, was stopped by the police under the leadership of Police Chief Adj Intel Manado. Army officers entered the dorm, to catch four people.
In fact, 75 others were also arrested. They were detained for more than 24 hours in the yard Manado Police, and were released on Wednesday morning.
The rally was held to protest against the events Trikora well as support for full membership ULMWP at MSG.
Quoted from Liputan6.com, Police investigators Manado, North Sulawesi, on Wednesday, December 21, 2016, set four students from Papua as a suspect case of treason. This determination is made after 85 Papuan students examined intensively since they were taken to the Police Office of Manado on Monday afternoon, December 19, 2016.
"Finally, four people named as a suspect for violating Article 106 of the Criminal Code," said the Invisible Criminal Police Commissioner Edwin JA Humokor Manado, Thursday, December 22, 2016.
Edwin said, four Papuan students had been detained and will be processed in accordance with applicable law.
Manado Police Chief Pol Hisar Siallagan also confirmed there has been a suspect determination of 85 students who staged a peaceful demonstration on Monday (19/12) ago. He regretted that the students do a stunt like that.
"The government has been preoccupied with the action 212 in Jakarta. They even take action here. All the odds are not in accordance with the framework of the Unitary Republic of Indonesia (NKRI) we will take, "Hisar added.
The Director of Legal Aid Manado, Hendra Baramuli Papua who accompanied the students said, would take the next step following the establishment of the suspect.
"We are still studied to the next step," said Hendra.
Announcers: Ardi Bayage
Editor: Arnold Belau
——————————————
Posted by AWPA Sydney News at 11:32 AM