1) Vanuatu’s Position Has Not Changed

A large delegation of West Papuan independence leaders met with the Prime Minister, and presented him with a traditional Bird of Paradise chieftain's headdress
Dan McGarry
Vanuatu Prime Minister, Charlot Salwai, was cheered by approximately 50 leaders of West Papua who are currently in Port Vila, when he assured them his Government’s position on West Papua “has not changed and will not change”.
Not only that but that the entire Vanuatu society beginning with the chiefs, churches, women’s groups and youth groups are mobilised to call for the freedom of the people of West Papua.
He told them that the historical policy of the Government since independence 36 years ago is still the same for New Caledonia, French Polynesia and West Papua to achieve self-determination.

West Papua global campaigner, Benny Wenda, said it is the delegation’s dream and prayer for the Melanesian leaders in MSG spearheaded by Vanuatu, to grant West Papua full membership to the sub-regional organisation.
As a global campaigner for the West Papua struggle, Benny Wenda is confident that finding all the leaders of the struggle in West Papua shaking hands and laughing and speaking one language in Port Vila, means they and their Melanesian people in West Papua are linked by the one spirit that binds the people of Melanesia for the leaders of MSG to grant them full membership of the Melanesian organisation.
The Deputy Prime Minister, Joe Natuman, Minister of Lands Ralph Regenvanu and Parliamentary Secretary Johnny Koanapo were also present with Prime Minister to welcome the West Papua delegation.
As a token of gratitude to the Government of Vanuatu for its staunch support for West Papua, the Prime Minister was presented with a West Papuan traditional crown-like head gear made of the feathers of a bird of paradise and two baskets.
His colleagues were also presented with baskets.
Meanwhile in all towns in West Papua and Jakarta, reports allege one protester has been killed and 528 people have been arrested along with six children less than ten years old, for taking part in a peaceful parade to call on MSG to grant full membership of MSG.
“It cannot be explained why the arrests were made and the office of the ULMWP was destroyed when our colonisers are also an associated member of MSG,” Wenda said. 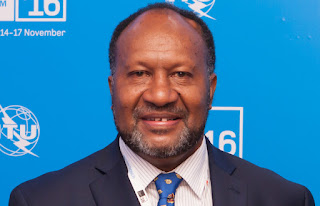 The Prime Minister of Vanuatu Charlot Salwai. Photo: ITU Pictures / R. Farrell
Mr Salwai said government and people of Vanuatu are behind West Papua to address the issue of human rights violations by Indonesia and the independence of the Melanesian people of West Papua.
He made the comment this morning when he received a high level delegation of West Papuans who are in Port Vila as the Melanesian Spearhead Group meets.
Although the MSG is split on the issue, Mr Salwai also said that he was happy with the progress so far in the international campaign of West Papua.
He also reiterated his support for New Caledonia's Kanaks in their decolonisation and French Polynesia at an regional and international level.
Posted by AWPA Sydney News at 4:19 PM