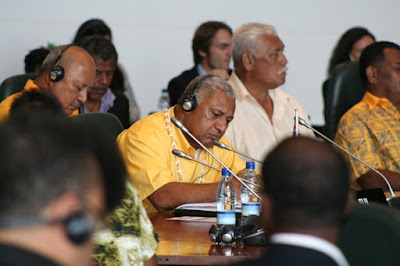 Fiji's prime minister and foreign minister Frank Bainimarama is not in Vila for this week's MSG meeting, but a leaders summit to decide on West papuan membership is expected early in the new year. Photo: RNZI / Johnny Blades
A series of Melanesian Spearhead Group meetings are taking place this week in Vanuatu's capital to look at the group's membership guidelines.
Last month, the MSG secretariat scheduled this week's meeting in Port Vila for leaders of its members to discuss a West Papuan bid for full membership.
However there will not be a leaders summit component at this week's meetings, with the expectation that they will now meet early in the new year.
But today in Vila, MSG senior officials met, and tomorrow the group's foreign ministers are to meet, to discuss the findings of a constitutional committee that has reviewed MSG rules on membership.
It's understood there won't be a decision on the full membership application by the United Liberation Movement for West Papua this week.
In a sign of the sensitivity around the issue within the MSG, leaders have this year deferred a number of summits where West Papuan membership was a priority item.
The Sub-Committee on Legal and Institutional Issues was tasked by MSG leaders at their Honiara summit in July to clarify guidelines for observer, associate and full membership in the group.
The MSG's five full members - Papua New Guinea, Fiji, Solomon Islands, Vanuatu and New Caledonia's FLNKS Kanaks Movement - have been divided over whether to grant full membership to West Papuans.
The United Liberation Movement for West Papua was granted observer status in the MSG last year but its bid for full membership has been deferred pending clarity on the guidelines.
The Liberation Movement's leaders, including Octo Mote, Benny Wenda, Rex Rumakiek and Jacob Rumbiak are in Port Vila for this week's meetings.
Indonesian representatives are also present.
——————————————————
http://www.radionz.co.nz/international/pacific-news/320889/freeport's-new-boss-pushes-papua-expansion-deal
2) Freeport’s new boss pushes Papua expansion deal
3:32 pm today
Chappy Hakim, a retired Indonesian air force chief who says he knows next to nothing about mining, now heads the local unit of mining giant Freeport-McMoRan.
This comes as Freeport seeks the go ahead for an $US18 billion expansion of its Grasberg mine - one of the world's biggest deposits of gold and copper - in Papua.
Mr Hakim was appointed last month as the company seeks to reverse Indonesia's plans to stop the exports of ore.
Reuters reports him as saying his experience leading the air force and later an air safety panel after a string of deadly plane crashes would help him with both human resource management and mine safety issues.
Freeport said Mr Hakim's appointment was made in consultation with the government and comes as the company fights to win an extension on its mine beyond 2021.
Freeport needs to sign off in late 2017 on the $18 billion plan to transition Grasberg from open pit to underground mining, and it wants the contract renewed before committing the money.
————————————————-
http://www.radionz.co.nz/international/pacific-news/320854/over-500-arrested-in-west-papua-demonstrations
3) Over 500 arrested in West Papua demonstrations
2:10 pm today
There were over 500 reported arrests from West Papua demonstrations in Indonesian cities yesterday.
The demonstrations were calling for self-determination for West Papuans on the anniversary of the first Indonesian military invasion in 1961.
Demonstrations were held in Jayapura, Merauke, Nabire, Manokwari, Timika, Yahukimo and Sorong and also in cities outside Papua such as Jakarta, Manado, Ambon, Bandung and Yogjakarta.
Police in the various centres rejected granting the demonstrators permission, but the activists proceeded anyway.
In total, 528 demonstrators were arrested by Indonesian police across these cities.
In Wamena, 165 people were arrested, of whom 15 are understood to have been released.
Arrests numbered 126 in Merauke with all later released.
Children were reportedly among the 74 arrested in Nambire and also amongst those arrested in Merauke and Wamena.
Activists with the West Papua National Committee, which organised many of the demonstrations, were subject to beatings in Jayapura and had their central headquarters vandalised.
There are also allegations of ill-treatment of demonstrators who were arrested in Nabire where several are badly injured after assault by rattan cane and coal.
The latest round of mass arrests brings to well over 5000 the number of people arrested in Indonesia for peaceful demonstrations in support of West Papuan self-determination this year.
————————————————-
http://www.thejakartapost.com/news/2016/12/19/accused-of-treason-dozens-of-papuans-arrested-in-manado.html
4) Accused of treason, dozens of Papuans arrested in Manado
Manado, North Sulawesi | Mon, December 19, 2016 | 10:14 pm
The Manado Police arrested more than 70 Papuan students who were about to stage a rally on Monday, accusing them of treason.
The police detained them as they were preparing for rallies in two locations in Manado, North Sulawesi. Some of the students were arrested in Papuan Student Dorm while others were arrested in the front yard of North Sulawesi Council. The police said they confiscated Bintang Kejora or Morning Star paraphernalia associated with Papua’s independence movement.
“Every possibility that is not in line with Indonesia’s unity [NKRI] will be processed,” Manado Police chief Sr. Comr. Hisar Siallagan said Monday.
Read also: Activists stage peaceful rally, ask UN to monitor situation in Papua
He claimed the condition in Papua was peaceful and there was no demand for an independence referendum. He said the government even gave special attention to Papua’s development acceleration even though it cost a lot of money. “I don’t see any urgency [for the rallies],” he said.
In 2016, Papuan students in Manado had attempted to stage three rallies. Each one was dispersed by the police.
According to data made available to The Jakarta Post by Veronica Koman, the lawyer of Papuan self-determination activist Filep Karma, the rallies on Dec. 19 were held in Jayapura, Merauke, Nabire, Yogyakarta, Manado, Wamena, Jakarta, Sorong, Manokwari, Timika, Yahukimo, Bandung, Ternate and Ambon.
The lawyer said a total of 528 people were arrested Monday, with Wamena recording the highest number of people arrested (165 people, 15 were released).
In Jayapura, the arrest involved beatings, Veronica said, and seven people were badly injured. (evi)
——————————————————
http://www.antaranews.com/en/news/108477/indonesia-house-urges-govt-to-evaluate-primary-weapons-defense-system

5) Indonesia house urges govt to evaluate primary weapons defense system
Senin, 19 Desember 2016 17:53 WIB |
Jakarta (ANTARA News) - The House of Representatives has urged the government to evaluate Indonesias primary weapons defense system (alutsista), following the latest accident on December 18, when a C-130HS Hercules registers numbered A-133 crashed in Wamena, Papua, on Sunday morning."When there is old military equipment, the government should replace it," Deputy Chairman of the House of Representatives, Fadli Zon, said here on Monday. The Hercules was obtained by Indonesia from a foreign country under a grant scheme.The deputy speaker affirmed that the investigation of the aircraft accident should be conducted transparently, whether the plane crashed due to overloading, bad weather or age.In addition, he supported the modernization and revitalization of the Indonesian Armed Forces main weaponry system.Indonesia is the largest archipelago and has a vast territory."Marine and air areas are important. Papua areas can be reached only by air," he pointed out.The Air Force has confirmed that 13 people were killed in the crash in Wamena, Papua, on Sunday morning."The airplane flew 13 people, consisting of 12 crew members and one passenger, from Abdul Rachman Saleh airbase in Malang (East Java). All of them were killed in the crash," Air Force Deputy Chief Vice Marshal Hadiyan Suminta Atmadja said, at Halim in Jakarta on Sunday.The crew members of the Hercules plane were Major Marlon Kawer (pilot), Captain J. Hotlan F. Saragih (Co-Pilot), First Lieutenant Arif Fajar Prayogi (Navigator),First Lieutenant Hanggo Fitradhi, Warrant Office Class 1 Lukman Hakim, Warrant Office Class 1 Suyata, Warrant Office Class 1 Kusen, Sergeant Major Khodori, Warrant Officer Class 1 Agung Tri, Warrant Officer Class 2 Agung S, Sergeant Major Fatoni, and Second Sergeant Suyanto.(Uu.A063/INE/KR-BSR/B003)
————————————-
Posted by AWPA Sydney News at 11:59 PM