Google translates below of articles in local media in West Papua.
Be-aware google translate can be a bit erratic.
Original bahasa links above articles 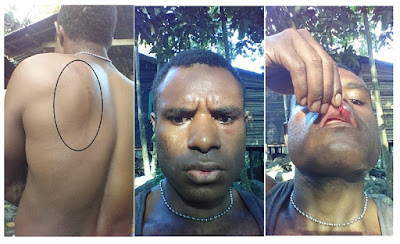 Polres Jayapura call dozens of KNPB activists have been repatriated 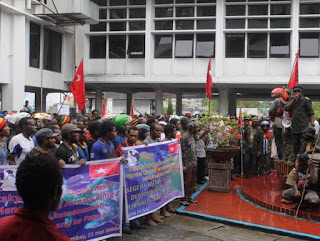 "It has been repatriated at 16:00 WIT, only the data are identified by people, questioned, then sent home."
KNPB Mass Illustration - Doc. Jub

Jayapura Police Chief, AKBP. Gustav Urbinas confirmed his side has secured as many as 53 people KNPB. However, after being identified, they are then discharged.

"It has been repatriated at 16:00 WIT, only the data are identified by people, questioned, then sent home."

They are secured when going to hold activities. "But its activities without notice to the police," said AKBP. Gustav Urbinas when contacted Jubi via phone, Monday (01/05/2017).

According to him, because the action will be done in the community and involves many people, the police took the masses to the local Polres to ask about the activities undertaken and the purpose.

"They held an activity in Sekertariat KNPB in BTN Purwodadi," he said.

The police chief also denied the information obtained by Jubi mentioning in the action, the police damaged the KNPB Sentani Secretariat and ransacked the property of KNPB and the public around the secretariat.

"Oh, no, no, we only secure goods that are contrary to the Unitary Republic of Indonesia, goods such as KNPB flags, camouflage clothing, documents and all that we confiscate, if personal items have been returned," he said.

While spokesman KNPB Center Bazoka Logo as quoted from suarapapua.com say, at 07.36 WIT, the police came to the Secretariat KNPB Sentani Region. Then the police forced the mob commanded by KNPB Sentani area to disperse. Police then arrested the mass gathered at the KNPB Sentani Secretariat.

"The police came to stop the activities. Caught 200 people then taken to Jayapura Resort Police. 150 people have been sent home. 50 people are still detained while 26 people are suspected of being tortured by the authorities, "Bazoka Logo said.

According to him, not only dissolved and captured the masses, the police also entered into the KNPB Secretariat and damaged the facilities and scribbled the walls of the house, also seized the goods belonging to KNPB. (*)

Posted by AWPA Sydney News at 2:50 AM