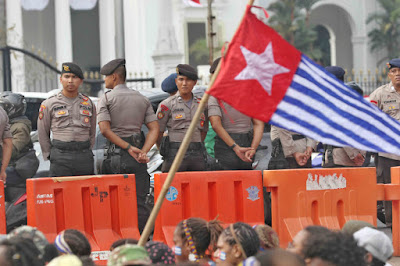 Papuan students stage a rally in front of the State Palace in Jakarta on Wednesday to demand that the government restore
the internet service in restive Papua and West Papua provinces and hold a referendum on Papuan independence. (JP / Dhoni Setiawan)
Hundreds of Papuan students took to the streets in Central Jakarta following similar protests in the highlands of Papua earlier this week.
The protesters marched from the Army headquarters to the State Palace, carrying banned Morning Star flags, a symbol of the Papuan independence movement.
“The students and the people of Papua have agreed to call for a referendum,” protest coordinator Ambrosius said during the rally.
In addition to a referendum, the protesters also called for the governors of Papua and West Papua to facilitate a return of Papuan students back to their provinces.
The students also demanded that the Information and Communications Ministry lift the government-imposed internet blackout that has been in place in the country’s easternmost provinces since last week.
When they reached the front of the State Palace, protesters burned tires and performed traditional Papuan dances while chanting. The crowd dispersed peacefully at around 5:30 p.m.
The protests came amid reports that civilians had been shot by security forces during an antiracism rally in Deiyai regency, Papua. Eyewitnesses said that six protesters were feared dead and at least three others were injured during the incident.
Authorities have confirmed that one soldier died and at least two policemen were injured in the incident, but have yet to confirm civilian casualties. (kmt/tru)
-------------------------
https://www.aljazeera.com/news/2019/08/west-papuan-protesters-killed-indonesian-police-witnesses-190828103919896.html

But national police deny a deadly shooting incident took place in an interview with Al Jazeera.
by Febriana Firdaus  8 hours ago
Jakarta, Indonesia - At least six protesters and one military officer have been killed and several others including children wounded in West Papua after authorities clashed with demonstrators demanding independence, witnesses have said.
A source at one of the demonstrations on Wednesday in Papua province's Deiyai regency said at least six Papuans were killed.
The witness, who requested anonymity for security reasons, also saw several people wounded by gunfire and demonstrators fleeing to the jungle for fear of being pursued by police and soldiers.
Suara Papua, the most widely read publication in the region, also reported the six protester deaths.
However, in an interview with Al Jazeera, Indonesian national police spokesman Dedi Prasetyo denied that demonstrators were killed in Deiyai.
News website Kompas quoted Papua's regional police chief, General Rudolf Rodja, as saying one military officer was killed and two police officers were injured during clashes with protesters.
Demonstrations have raged throughout West Papua for more than a week. The region is divided into two provinces, West Papua and Papua.
Because of an internet shutdown, Al Jazeera and other media organisations face difficulty in gathering and verifying news from the area.

Pastor Santon Tekege from Papua province's Catholic Church attended the rally in Deiyai, alongside children, women, and elders.
He told Al Jazeera he witnessed Wednesday's shooting in Deiyai, where the protesters earlier raised the banned pro-independence Morning Star flag.
He said he saw bodies lying in front of the Deiyai regent's office. It was unclear if the individuals were injured or dead.
Santon said the crowd of Papuan demonstrators first gathered on Wednesday morning at the Wagete district of Tigi, the capital city of Deiyai regency.
One of the protesters then handed over a statement to Deiyai's regent, Ateng Edowai, stating their grievances against the government.
During the rally, Santon reported seeing a drone hovering over the crowd. Then the police and military started dispersing the protesters by firing tear gas.
As the crowd became agitated, the authorities then started shooting protesters, said Santon.
"I ran to the jungle to save myself," he said. "Wagete is now empty. Everyone fled to the jungle including the wounded. The situation is very intense now."

Yones Douw, a pastor from Kingmi Church in the neighbouring regency of Nabire, told Al Jazeera villagers from Deiyai reported to him they witnessed two children being shot and one died. It was unclear if the fatality was included in the six people reported killed.
Arnold Belau, chief editor of Suara Papua publication, also reported hearing gunshots while calling his source.
Meanwhile, human rights lawyer Veronica Koman said the military blocked the road to Deiyai from neighbouring Paniai regency, where thousands of demonstrators also marched on Wednesday.
Veronica told Al Jazeera mobile phone signals were disrupted in the area where the shooting took place.
Another source told Al Jazeera at least five soldiers and two civilians were being treated at the Paniai hospital after sustaining injuries during clashes in Deiyai.
In a statement to Al Jazeera, Usman Hamid, executive director of Amnesty International Indonesia, confirmed the shooting in Deiyai.
He called on the government and police to investigate "unlawful deaths".

The ongoing protests in West Papua region first erupted last week after Papuan students in Surabaya, East Java, reportedly faced mistreatment by police and were subjected to racial abuse.
Last week, the large demonstrations turned violent as thousands of protesters burned public facilities and blocked roads.
West Papua was a Dutch colony until the early 1960s when Indonesia took control, cementing its rule with a controversial referendum.
The government in Jakarta maintains the West Papua region, which occupies the western half of the island of Papua New Guinea, is Indonesia's because it was part of the Dutch East Indies that forms the basis of the country's modern-day borders.
A low-level armed rebellion by indigenous Papuans, who now make up about half the population after years of migration by people from other parts of Indonesia, has been rumbling ever since.
West Papua is the poorest region in the country and there have been allegations of human rights violations.
In December, violence also erupted in the province killing at least 17 people and triggering a military crackdown.
Some 35,000 civilians have been forced from their homes as security forces attempt to flush out the rebels from the forested mountains.
SOURCE: AL JAZEERA NEWS
————————————————
https://en.antaranews.com/news/131782/three-killed-in-riot-in-deiyai-district
Three killed in riot in Deiyai District  5 hours ago
Jayapura, Papua (ANTARA) - Two civilians and an army soldier were killed in a protest that turned violent in Deiyai District, Papua, Wednesday, Papua Police Chief Inspector General Rudolf Rodja said. "Reports that six civilians were killed and injured in the incident are untrue. We can confirm that three people were killed, two of them were civilians and one was an army soldier," Rodja said when contacted here Wednesday.The riot erupted when nearly one hundred people were staging a protest in front of the Deiyai District office. Suddenly, another 1,000 people appeared at the scene and some of them tried to attack the security personnel.The mobs attacked a car, killing an army man, Second Sergeant Rikson with a machete and an arrow. They also seized 10 assault rifles SS 1 and some ammunition.After grabbing the military rifles, they opened fire on security personnel who were controlling the protestors and the subsequent exchange of fire was unavoidable, Rodja said.Five military and police personnel were injured in the incident. All the victims were quickly evacuated to Enarotali Hospital and the situation is now under control, he added. (INE)EDITED BY INERelated news: Military, police chiefs hold closed-door meeting with Papuan figuresRelated news: Security, public order in Papua under control: Gen. Tito Karnavian
——————————————————————
https://jakartaglobe.id/context/freeport-confident-of-meeting-2023-smelter-target-after-securing-3b-loan-commitment

BY : PRIMUS DORIMULU
AUGUST 26, 2019
Surabaya. Freeport Indonesia, the country's largest gold and copper miner, has secured a $3 billion financing commitment from 11 local and foreign banks, putting it a step closer to completing a critical smelter by 2023.
The company must complete the smelter to fulfill its part of the deal with the government to extend operations at its Grasberg mine in Papua until 2041.
"Freeport has obtained loan commitments from 11 banks and this is the first loan since the company started operating," Freeport Indonesia president director Tony Wenas told BeritaSatu over the weekend. He added that three of the lenders are domestic banks.
Freeport Indonesia is currently building a smelter in the Java Integrated Industrial and Ports Estate in Gresik, East Java. It has invested $150 million of its own funds in feasibility studies, engineering services, environmental impact analyses, rental fees and soil maturation for site preparation.
The miner switched its contract of work agreement to a special mining business permit last year after intense negotiations, which saw the Indonesian government becoming the company's majority owner.
The special mining business permit does not allow Freeport Indonesia to export copper concentrate and requires it to build a domestic smelter and establish a mineral refining and processing company within five years of the permit's issuance.
"We believe the construction of the smelter can be completed on time and that it will be operational by December 2023," Tony said.
Capacity
Freeport Indonesia currently produces about 3 million metric tons of concentrate annually, 1 million of which is now processed by Smelting, a joint venture with Japan's Mitsubishi in Gresik.
Smelting president director Hiroshi Kondo said the company processes about 1.1 million tons of copper concentrate annually, with 100,000 tons of it coming from Amman Mineral, a mining subsidiary of Medco Energy Indonesia in West Nusa Tenggara.
Smelting produces 291,000 tons of copper cathode annually, with byproducts including 1.04 million tons of sulfuric acid, which is used to make fertilizer; 805,000 tons of copper slag, used in the cement industry; 31,000 tons of gypsum, a building material; and 2,000 tons of anode sludge; which contains gold, silver and other precious metals.
State-owned Petrokimia Gresik takes the sulfuric acid from Smelting, while several cement manufacturers process the copper slag.
But Kondo said Smelting only paid out dividends in the past three years, after 23 years of operations, as local market absorption is less than expected.
"One of our considerations in smelter investment in Indonesia is the large Indonesian market. It turns out, most of the cathode must be exported because of the small absorption capacity in the domestic industry," Kondo said.
Smelting's cathode is exported to Malaysia, Thailand and Vietnam, where it competes with cheaper products from other suppliers.
Tony said Freeport expects its new smelter to face similar challenges. "But this is our commitment," he said.
Tony added that Freeport's smelter plant would produce about 550,000 tons of copper annually and enough anode sludge to allow a third party to produce between 30 and 60 tons of gold and 120 tons of silver per year.