2) PNG governor wants West Papua referendum
----------------------
https://www.thejakartapost.com/news/2019/08/09/pwi-plan-to-invite-foreign-journalists-to-papua-may-be-politicized.html
1) PWI plan to invite foreign journalists to Papua may be ‘politicized’
Ivany Atina Arbi   The Jakarta Post
Jakarta   /   Fri, August 9, 2019   /  01:59 pm
In a bid to give foreign media access to reporting about Papua, the Indonesian Journalists Association (PWI) has planned to bring several foreign journalists to the province, which has been marred by violence for years.
With a full support of the government, the PWI is to show the foreign journalists that “nothing wrong is happening in Papua”.
The plan, however, was criticized by human rights and media activists at home. They argued that the move might have been politicized, with the government using the PWI to strengthen its political agenda of expanding diplomatic relations with several Pacific countries.
PWI chairman Atal Sembiring Depari previously said his organization was mulling over a plan to invite “Asia-Pacific journalists” to Papua during the celebration of National Press Day on Feb. 9, 2020 in the province’s capital, Jayapura.
“We can use this opportunity to prove to the world that everything is alright in Papua,” Atal said after a meeting with Coordinating Political, Legal and Security Minister Wiranto on Aug.5.
He added “outsiders” often accused the government of treating the country’s easternmost province poorly by committing various human rights violations and injustices.
“That’s not factual,” he said.
Rights group Amnesty International Indonesia, however, begged to differ by revealing that human rights violations did happen in Papua, many of which allegedly involved security forces, as summarized in its 2018 report entitled “Don’t bother, just let him die: Killing with impunity in Papua”.
At least 95 people were unlawfully killed in Papua from January 2010 to February 2018, with police officers and soldiers being the perpetrators, the report said. Among the casualties were people who staged peaceful rallies. Dozens of them had also died from the unlawful use of force in cases related to pro-independence issues.
“The government must undertake serious efforts to address human rights violations in Papua. Therefore, the journalists will portray its positive attitudes and report them to the world,” Amnesty International Indonesia spokesperson Haeril Halim said, adding that both local and foreign journalists faced various issues -- from security to access -- while covering news in Papua.
He revealed that several local journalists of Papuan ethnicity had even received discriminatory and repressive treatment from security officers while on the job.
“I don’t know whether the PWI’s intention is to fight for press freedom in Papua or to further push Indonesian diplomacy in the Pacific region. I think it should prioritize [the former] to create full and unlimited access for both local and foreign journalists in Papua,” Haeril said.
The Foreign Ministry announced previously that Indonesia was moving to strengthen its regional ties with Pacific countries by establishing diplomatic relations with Niue and Cook Islands while pursuing trade deals with Fiji and Papua New Guinea.
The chairwoman of the International Federation of Journalists (IFJ) in the Asia-Pacific, Jane Worthington, supported the PWI’s initiative to bring in foreign journalists to Papua as an attempt to dismiss various accusation against the government, yet she did not think it could altogether solve coverage problems that journalists had there.
Worthington, who had visited Papua some years ago, said there were several issues she faced when in Papua, including about safety, access and surveillance.
“We had problems with being monitored, being followed and also there was some control of what I can cover,” she said.
Worthington revealed that the process to gain permits for news coverage in Papua was “very long and drawn-out”. Some journalists consequently made the decision to go in using tourist visas because of the “onerous procedure”.
“That space needs to be opened up. We need to advocate more about opening up [Papua] for journalists, not only Indonesian journalists going in but also international media,” she added.
The chairman of the Alliance of Independent Journalists (AJI) in Papua, Lucky Ireeuw, said separately that the plan to facilitate the Asia-Pacific journalists to cover Papua was likely being “politicized by the government”.
“It’s the duty of journalists to make a report based on the real facts they find in the field, including in Papua. They do not need to be asked, or mobilized by the security ministry,” Lucky said, adding that the AJI had long fought for press freedom in Papua both for local and foreign journalists.
“We want free access to all areas in Papua, without being monitored and limited like our previous experiences. We want Papua to be reported objectively and based on its real condition.”
----------------------------------------------
https://www.rnz.co.nz/international/pacific-news/396338/png-governor-wants-west-papua-referendum
2) PNG governor wants West Papua referendum 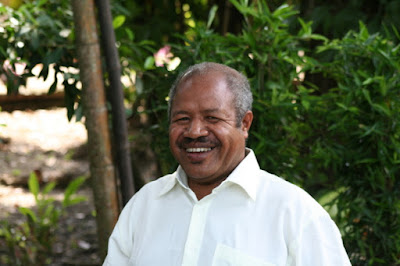 Powes Parkop, the governor of Papua New Guinea's National Capital District. Photo: RNZ / Johnny Blades
In a statement, Powes Parkop also backed a call from Pacific Islands Forum Foreign Ministers to raise the issue of human rights abuses in Papua at next week's Forum leaders summit.
Mr Parkop said the crisis in Papua had escalated due to Pacific nations letting fear of Indonesia dictate their approach to it.
He said the Melanesian Spearhead Group should also accept an application for full membership by the United Liberation Movement for West Papua.
"Indonesia must realize that when it choose to restore the rights and dignity of the West Papuan people it will unleash great joy."
Mr Parkop said he had delivered the same message on West Papua to PNG Prime Minister James Marape and Solomon Islands Prime Minister Manasseh Sogovare.
According to him, he planned to also deliver it to the governments of Australia, New Zealand, Fiji and the US, adding that he had requested a meeting with Indonesia's government.
Jakarta says Papua's incorporation into the Indonesian is final and non-negotiable.

The United Liberation Movement for West Papua has welcomed a resolution by Pacific foreign ministers to push for a UN Human Rights office visit to Papua.
In January, the UN Human Rights Commissioner Michelle Bachelet said Indonesia's government agreed in principle for a team from her office to visit Papua.
However, Pacific Forum members are concerned that the invitation is not being honoured. Forum foreign ministers have called for the timing of the visit by to be finalised by both parties.
They also seek for a resulting report on the Papua situation to be presented before the next Pacific Islands Forum leaders meeting in 2020.
Benny Wenda, Wellington, 10 May 2017. Photo: RNZI / Koroi Hawkins
The Liberation Movement's chairman, Benny Wenda, urged Pacific Forum leaders to endorse this call when they meet for their annual summit in Tuvalu next week.
Mr Wenda said such a stand reflected the values at the heart of the Blue Pacific campaign to develop a region of peace, harmony, security, social inclusion and prosperity where all Pacific people can lead free healthy and productive lives.
Accordnig to him, Pacific civil society networks continue to provide support to Forum Leaders and Government regarding the human rights issues of West Papua.

Posted by AWPA Sydney News at 1:17 AM