2) Students urge govt to eliminate all forms of racism against Papuans
3) Security, public order in Papua under control: Gen. Tito Karnavian
4) Military, police chiefs hold dialog with Papuan leaders in Biak
5) All parties urged to maintain security in Papua
---------------------------
https://www.ulmwp.org/press-release-second-wave-of-west-papua-uprising-commences-in-struggle-for-independence-referendum
1) PRESS RELEASE: ‘Second Wave’ of ‘West Papua Uprising’ commences in struggle for independence referendum
August 26, 2019 in Press Release
Tens of thousands of West Papuans are taking to the streets this week in a ‘second wave’ of the West Papua Uprising, following mass demonstrations against Indonesian rule last week. Sparked by the racist abuse and arrests of West Papuan students in Surabaya on August 17, rallies have taken place across West Papua on a scale not seen since the Papuan Spring of 1999-2000. Protestors are demanding a referendum as the only way forward for a peaceful conflict resolution in West Papua.
The internet remains virtually shutdown across West Papua with all data services no longer functioning. This deliberate attempt to stifle freedom of expression intensifies a six-decade-long ban on international journalists from entering the region. The blackout is severely hampering information on the number of Papuans arrested, shot and killed by security services. At least 45 people have been arrested in Fakfak and at least three people shot in Fakfak and Timika, including a 13-year-old girl in Manokwari on August 19. At least one person has been killed in Wamena.
The United Liberation Movement for West Papua is advising all international media to pay attention to the escalating political situation in West Papua. With a rapidly increasing military and police presence, there are concerns about a repeat of the 1991 Santa Cruz massacre.
The ULMWP is also calling for the immediate release of all political prisoners in West Papua, including Bazoka Logo, Head of the ULMWP’s Political Bureau, who was arrested for leading peaceful demonstrations in support of the Pacific Islands Forum leaders on August 15. PIF leaders recently released a joint communique calling on ‘all parties to protect and uphold the human rights of all [West Papuan] residents and to work to address the root causes of the conflict by peaceful means’.
ULMWP Chairman Benny Wenda stated, ‘The racist discrimination towards the West Papuan people is the spark that has lit the fire of over 50 years of sentiment against injustice, 50 years of determination to be free. Now my people are launching a second wave of demonstrations, and the time has come for us to reclaim our country. We urgently need the world to be alert and to support us and our struggle for self-determination and peace.’
[ENDS]
Videos of mass demonstrations on August 26:
Contacts:
For interviews with ULMWP Chairman Benny Wenda, ULMWP Press Office: press@ULMWP.orgULMWP Pacific Mission – Ronny Kareni: +61 401 222 177Additional footage and photos also available on request
————————————
https://en.antaranews.com/news/131718/students-urge-govt-to-eliminate-all-forms-of-racism-against-papuans
2) Students urge govt to eliminate all forms of racism against Papuans
3 hours ago 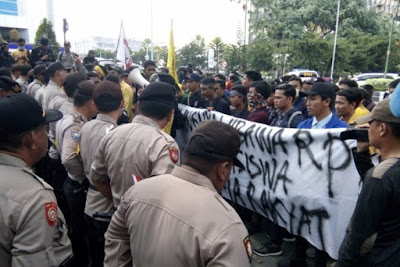 A students' rally (Antaranews' photo)
Tanjungpinang, Riau Islands (ANTARA) - Tanjungpinang, Riau Islands (ANTARA) - Tens of activists of the Tanjungpinang-Bintan Student Alliance staged a peaceful rally here on Tuesday to show their solidarity with the Papuan students in Malang, East Java, and urge the government to eliminate all forms of racism against the Papuans."We stage this rally to show our solidarity and care for our Papuan compatriots who are studying in Malang. What has happened there is expected not to recur," the rally coordinator, Yogi, said.The protesting students who staged their rally at Gonggong Building in Tanjungpinang city, Riau Islands Province, also demanded that the government bring those responsible for the Malang incident to court."We call on the government to guarantee the rights and freedom of the Papuan students all over the country [and protect them] from stigmatization and acts of violence," Yogi said.Malang Deputy Mayor, Sofyan Edi Jarwoko, had recently been caught in the spotlight after the native Papuans in the provinces of Papua and West Papua accused him of threatening to send the Papuan students in Malang back home.In fact, Jarwoko did not make a statement containing a threat to the Papuan students in the aftermath of the rally that the Papuan Student Alliance (AMP) and Indonesian People's Front for West Papua (FRI-WP) staged in Malang city on August 15, 2019.Instead, he just responded to local journalists on whether he would take the option of sending the Papuan students home as had been carried out in 2016.Jarwoko was quoted by Kompas TV as saying on August 21 that he had never made a statement on sending the Papuan students home.He just said that returning the Papuan students was an option, but the impact of their rally needed to be assessed further before coming up with the option.In another development, two TNI officers had been questioned for their alleged racist slurs against students in Surabaya, East Java, that triggered anger in the Papua and West Papua Provinces.Indonesian Military (TNI) Commander Air Chief Marshall Hadi Tjahjanto said the officers being investigated are Major NHI, commander of the Surabaya 0831/02 Regional Military Command, and a village supervisory non-commissioned officer (Babinsa).Addressing a press conference after holding a dialogue with several representatives of the Papuan customary communities in Biak Numfor District, Papua Province, Tjahjanto said whatever mistakes the army personnel had committed on duty would consequently be sanctioned.Related news: Papuan students stage peaceful rally in Bali against Surabaya incidentEDITED BY INE