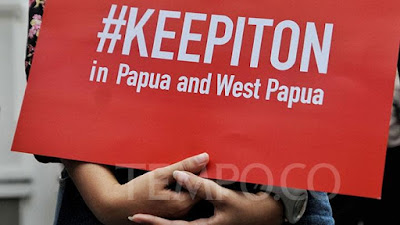 TEMPO.CO, Jakarta - The Institute for Criminal Justice Reform (ICJR) Executive Director, Anggara, said that his institution is in the midst of taking legal steps against the government’s policy upon blocking the internet connection in Papua Province and West Papua, which has lasted since Wednesday, August 21.
“There is no other alternative,” said Anggara in a text message to Tempo on Sunday, August 25.
The legal actions may take the form of a civil lawsuit with simple demands, which is to push the government to reopen the region’s internet access and issue a public apology.
However, Anggara is yet able to confirm when the lawsuit would be filed and that ICJR must consolidate its efforts with other mass-organizations in filing the lawsuit. He says that the lawsuit will still be filed even after the access is reopened.
“There are permanent losses and the acts against the law are not just about reopening the internet access and the quantifiable losses, but [what the government is doing] is basically against the law,” he said.
ICJR has been persistent that the Papua internet blockage is an unreasonable attempt by the Communication and Informatics Ministry as people right to the internet is overseen in the 1945 Constitution.
CAESAR AKBAR
————————————
https://www.rnz.co.nz/international/pacific-news/397527/more-protests-in-papuan-regencies
2) More protests in Papuan regencies
West Papuans continue to mobilise to protest against racism, with rallies being held today in several regencies of Papua. 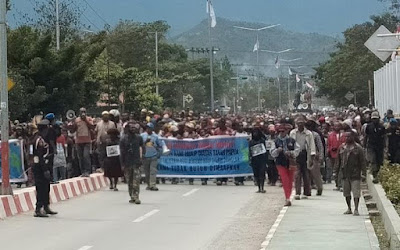 West Papuans protest against racism in Wamena, August 2019 Photo: Supplied
Large protests kicked off in the Indonesia-ruled region last week in response to harassment of Papuan students in Javanese cities.

Despite an internet blackout enforced by Indonesia's government in much of Papua, people are mobilising today in regencies including Nabire, Dogiyai and Yahukimo.
A large demonstration has also been held in the Highlands city of Wamena.
While dozens of protests took place last week, several turned violent.
Indonesia has deployed a thousand extra military and police personnel to Papua in response to the mobilisations.
----------------------------------
https://en.tempo.co/read/1240264/5-tni-soldiers-discharged-following-papuan-dormitory-siege?Engteco_newsUtama&campaign=Engteco_newsUtama_Click_4
3) 5 TNI Soldiers Discharged Following Papuan Dormitory Siege
Translator:

26 August 2019 11:23 WIB
TEMPO.CO, Jakarta - Brawijaya Military Command (Kodam) head of information Lieutenant Colonel Imam Haryadi announced that five Indonesian Armed Forces (TNI) members will face discharge for allegedly participating in the besieging of a Papuan dormitory in Surabaya.
“They will be suspended from their duties until the investigation report on them is complete. Then it will be replaced by a penalty determined by the military court,” said Imam on Monday.
According to Imam, the discharge on the five TNI members are not directly related to the racial smears against the Papuan students during the siege but is closely related to their lack of communication skills and persuasion upon handling a conflict.
He says that a soldier must put forth communication and persuasion in the midst of an escalating moment of tension in the field.
“They failed to represent the true nature of an authority figure, lashing out in anger is forbidden. Meanwhile, our method is clearly to put forth social communication,” he said.
The siege and acts of discrimination shown by the perpetrators on a Papuan students’ dormitory in Surabaya are widely considered as the incident that later sparked widespread anger among the people of Papua and caused a massive riot across several locations in Papua Province and West Papua.
ANDITA RAHMA
------------------------------
https://www.theguardian.com/world/2019/aug/26/west-papua-thousands-expected-at-fresh-protests-after-week-of-violence
4) West Papua: thousands expected at fresh protests after week of violence
Kate Lamb in Jayapura Mon 26 Aug 2019 12.44 AEST
Rallies that began after military taunted Papuans with racist slurs have led to the government blocking internet in the region
Thousands of protesters were expected to take to the streets in six regions of West Papua on Monday, one week after violent demonstrations flared across Indonesia’s easternmost provinces, leaving one dead and dozens injured.
Activists expect thousands will join the protests as the population of highland areas is largely comprised of indigenous Papuans, compared with coastal towns such as Jayapura, where migrants from across Indonesia make up half of the population.

Read more
The planned action follows a week of rolling and in some cases violent demonstrations across West Papua sparked by an incident in the Javanese city of Surabaya where military officers and nationalist militia allegedly taunted Papuans with racist slurs, calling them “monkeys”, “pigs” and “dogs”.
Footage of the incident quickly went viral and has ignited widespread anger across West Papua, culminating in mass protests and renewing calls for independence.In the capital of Jayapura, Papuans who spoke to the Guardian were furious, saying they had long been discriminated against and treated as second-class citizens. Victor Yeimo, a pro-independence figure, said people were angry not “just because they call us monkeys, but because they [Indonesia] treat us like animals”.
At church services in the hills of Sentani on Sunday morning, pastors gave impassioned sermons denouncing racism they say Papuans have long endured, while across Jayapura banners have been strung up calling for racist actions to be rejected.
Prominent pro-independence figures in Papua said the Surabaya incident opened up historical wounds that had festered since the province was brought under Indonesian controlin 1969.
The expected protests on Monday come as the Indonesian government clampdown on the internet in the region continued. A spokesperson for the Papua police, Ahmad Kamal told the Guardian that internet services would continue to be limited for another week to prevent the spread of “fake news”.
When protests erupted in Jayapura last Monday, the government slowed internet speeds. Data services were cut completely by Wednesday.

Why are there violent clashes in Papua and West Papua?

Read more
Papuans were preparing to rally in the remote highland areas of Wamena, Yahukimo, Deiyai, Paniai and Pegunungan Bintang on Monday.
Markus Haluk from the United Movement for the Liberation of West Papua, said protesters had already tarted to gather in Wamena on Monday morning.
Haluk said the internet shutdown was “part of the military operation because the Indonesian military always finds a way to isolate Papua and stop Papuan voices being shared with the world.”
Local journalists have decried the blackout, saying it has made it increasingly difficult to verify information in the field at a critical time, while thousands signed a petition calling for services to be restored.
One local paper, the Cendrawasih Post, ran a story describing the shutdown as just another form of discrimination against Papuans.
“Everything is down,” said Victor Mambor, editor of Tabloid Jubi. “Many people are asking me about what is happening in Papua because they cannot get information. The internet is now only available in two places, Hotel Horizon and the Aston.”
At Suara Papua, editor Arnold Belau said internet services at their office were totally severed on Sunday. “The state’s policy of blocking the internet is very damaging for us since Suara Papua is an online media so we rely on the internet,” he said, adding that at least 20 online media outlets in Jayapura were effected.
Amid the shutdown police have confirmed that one man was killed in an armed clash between pro-independence fighters and security personnel in Wamena on Friday.
Activists claim dozens have also been injured but police have disputed this, calling the information a “hoax”.
———————————————————
https://www.onepng.com/2019/08/png-governor-calls-on-indonesia-to-free.html
5) PNG Governor calls on Indonesia to free West Papua
PNG Today  on 8/25/2019
As PNG looks forward to celebrate yet another independence, its 44th this year, Papua New Guinea's Port Moresby Governor  Powes Parkop, also reminded Port Moresby residents to be very mindful of West Papua's fight for its first!Governor Parkop officially announced Saturday September 7th, 2019 as a day of reckoning!"The whole city must come to a stand still and we must remember our brothers and sisters next door who are dying simply for their freedom," said Mr Parkop.
The call from Mr Parkop at Port Moresby's Jack Pidik Park today (Saturday 24th August, 2019) comes amid recent racial comments against Papuan students in Surabaya, East Java and further arrests by security forces on protesters mainly students in Manokwari, West Papua for simply refusing to celebrate Indonesia's 74th Independence last weekend.Security personnel and members of mass organizations reportedly launched physical and verbal racists comments such as 'Kick out the Papuans', Slaughter the Papuans' and 'Monkeys get Out' to a group of Papuan students barricaded in a dormitory in Surabaya, fearing more attacks.These comments sparked protests from the West Papuan community in Manokwari.Parkop condemned the racists comments outright and rallied supporters alike of the Free Papua Movement (OPM) in Port Moresby including Oro Governor Hon Garry Juffa among others, to all rise up and call upon the Indonesian Government to free West Papua once and for all."In two weeks time and on the eve of celebrating our 44th independence, we must stop everything and all come out in full force on September 7, and together as a nation voice our call upon the Indonesian government to free the people of West Papua!", exclaimed an emotional Parkop.
---------------------
Posted by AWPA Sydney News at 1:43 AM