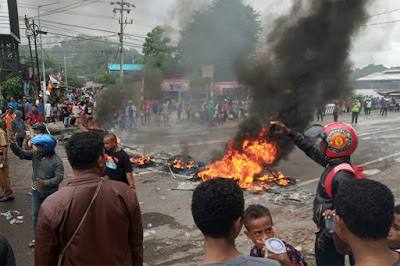 Rioting broke out in Manokwari, West Papua, on Aug. 19 as local people, comprising mostly university students, protested against the recent case of racial abuse of Papuan students in East Java. (Antara/Toyiban)
President Joko “Jokowi” Widodo is set to visit Papua and West Papua following rioting that broke out in the provinces’ capitals on Monday. The demonstrators protested racial abuse against Papuan students in East Java during the commemoration of Indonesia’s Independence Day over the weekend.
Presidential staff member Lenis Kogoya said on Tuesday that the visit would be made sometime next week.
“We will invite the President to Papua to talk with the locals there,” he said as quoted by kompas.com, adding that the state leader would accommodate the people’s aspirations regarding his next five-year term.
Jokowi, who has visited the easternmost part of the country more times than any previous president, had called on all Papuans to stay calm and forgive fellow citizens who had launched physical and verbal attacks on Papuan students in Surabaya, East Java.
Security personnel reportedly cursed the students with the words “monkey” and “pig” as they rounded up students at a dormitory in the city. The personnel were believed to be provoked by accusations that the students had destroying an Indonesian flag.
“Fellow citizens, pace [brothers], mace [sisters] and mama-mama [mothers] in Papua and West Papua, I know that there are some grievances. As fellow citizens, it is important to forgive each other,” Jokowi said at Merdeka Palace on Monday, addressing the Papuans in the local dialect. “It is better to forgive and be patient.”
The President, however, refused to comment on calls to investigate the racist abuse that sparked the rioting. (vny)
----------------------------------------
2) Police track down social media accounts suspected of sowing discord amid unrest in Papua
News Desk The Jakarta Post
Jakarta   /   Tue, August 20, 2019   /   05:05 pm 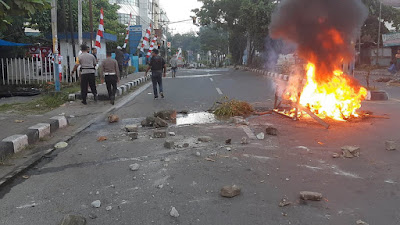 Protesters take to the street to face off with Indonesian police in Manokwari, Papua on Aug. 19. Riots broke out in Indonesia's Papua with a local parliament building torched as thousands protested allegations that police tear-gassed and arrested students who supported the restive region's independence. (AFP/Str)
The National Police have called on the public to refrain from sharing unverified information about the riots in Papua, as authorities track down social media accounts suspected of sowing discord.
The police were tracking down a YouTube channel and a Facebook page that had reportedly posted provocative content aimed at fanning the flames of unrest, National Police spokesman Brig. Gen. Dedi Prasetyo said
“We’re currently profiling [the social media pages]. Although they have deleted their videos, the [National Police's] Cyber Directorate is still able to investigate their digital footprints,” Dedi said on Monday, as quoted by tribunnews.com.
He said the police were still unable to confirm whether the two social media pages were affiliated and managed by the same administrators.
The police have yet to disclose the names of the social media accounts.
Rioting broke out in several cities in Indonesia's easternmost provinces, including West Papua's cities of Manokwari and Sorong as well as Papua's town of Jayapura, on Monday, as local people, comprising mostly university students, protested against the recent case of racial abuse of Papuan students in East Java.
The protests came after security personnel and members of mass organizations reportedly launched physical and verbal attacks on Papuan students living in a dormitory in Surabaya, East Java, on Sunday, accusing the Papuans of refusing to celebrate Indonesia's 74th Independence Day over the weekend.
The government temporarily limited internet access in Papua as the situation quickly escalated in an effort to curb the spread of misinformation amid the chaos. (rfa)
-------------------------------------
https://www.amnesty.org.uk/press-releases/west-papua-police-must-stop-discrimination-and-unlawful-use-force-against-students?fbclid=IwAR2BuP-nX66MfRfmEm6tWCyuJk3rzIi2fo3kHBRQWfdrlfK6vIMo3EPREJ4
3) Amnesty International UK Press releases West Papua: Police must stop discrimination and unlawful use of force against students
20 Aug 2019, 09:50am
Following yesterday’s events in West Papua Province, during which the local parliament building and a penitentiary were burned down and homes were destroyed, Usman Hamid, Amnesty International Indonesia’s Executive Director said:

“Indonesian authorities must act promptly to deescalate tensions in West Papua Province and guarantee that people who wish to protest peacefully can continue to do so.
“Security officers must refrain from using unnecessary or excessive force, prioritise dialogue with protesters and not use the violent acts of a few as a pretext to restrict or impede the rest from exercising their rights.
“Where investigations are opened for alleged offences committed during the protests, these must be for internationally recognised crimes and proportionate to the alleged offence.
“It is also crucial that the National Police addresses the root cause of the unrest by promptly launching an investigation into the allegations of discrimination and unlawful use of force against Papuan students in Surabaya, Semarang and Malang over the weekend.
“The recent allegations of discrimination by the police are only the latest accusations of such treatment over the years. The police have so far failed to protect Papuans from any form of discrimination, sending a worrying message that these acts are tolerated by the authorities.” 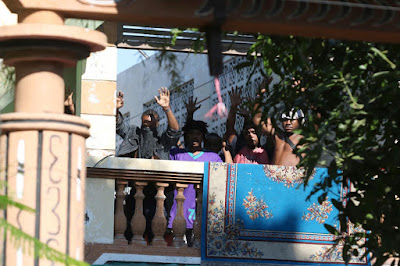 Some people raise their hands at a Papuan student dormitory on Jl. Kalasan 10 in Surabaya, East Java, on Saturday as security officers and members of mass organizations harass the students after reportedly finding a discarded Indonesian flag near the building. (Antara/Didik Suhartono)
To strengthen the sense of unity among Indonesian students after racist attacks against Papuan students, East Java Governor Khofifah Indar Parawansa plans to build a dormitory to accommodate students from various provinces.
“I feel like our sense of unity hasn’t reached a substantial level. Therefore, I was thinking what if we prepare a dormitory to accommodate students?” Khofifah said as quoted by news agency Antara on Monday.
She added that she had already discussed the plan with deputy governor Emil Elestianto Dardak.
“[The dormitory] will refresh our memory about how Jong Java, Jong Celebes and Jong Borneo [and other youth organizations in 1928] pledged an oath to protect our country,” Khofifah said, referring to youths from various ethnic groups during the 1928 youth movement promoting the birth of the unified Indonesia.
On Sunday, security personnel and members of mass organizations harassed Papuan students living in a dormitory in the East Java capital of Surabaya, launching a tirade of verbal slurs and physical attacks. The mob was apparently angered after finding a discarded Indonesian flag near the building, prompting them to throw stones at the dormitory while shouting racist remarks for hours.
Presidential staff member and Institution for Papua Indigenous Community chairman Lenis Kogoya visited the governor’s office at the Grahadi building on Tuesday afternoon. Lenis, along with Khofifah and Surabaya Mayor Tri Rismaharini, was also set to visit the Papuan student dormitory in Surabaya to meet the students. (dpk)
————————————————
https://en.antaranews.com/news/131300/police-dispatches-four-units-of-brimob-personnel-to-west-papua
7) Police dispatches four units of Brimob personnel to West Papua
9 hours ago
Jakarta (ANTARA) - Four units of Mobile Brigade (Brimob) personnel from three provincial police are stationed in West Papua to facilitate restoration of security following riots in the provincial capital of Manokwari on Monday, a police spokesman stated.The deployed Brimob personnel come from the Southeast Provincial Police, North Sulawesi Provincial Police, and Maluku Provincial Police."They have been stationed according to their respective position. The most important aspect is that the presence of Brimob personnel aims to ensure a peaceful situation," Chief of the Public Relations Bureau of the National Police (Polri) Brigadier General Dedi Prasetyo stated on TuesdayHe affirmed that the security condition in West Papua, especially Manokwari, has been brought under control, and the local people have returned to their routine activities.According to the police, 10 public facilities incurred damage in the aftermath of the riots in Manokwari, while 15 facilities were damaged in Sorong.On Monday, thousands of people in Manokwari had demonstrated to express their ire over alleged racist action against Papuan students in Surabaya and Malang, East Java. They had set fire to tires in several parts of the city and main streets.The rally was also reported in Jayapura, the capital city of Papua Province. Related news: East Java Police avers no Papuan students faced racismRelated news: Police Chief confirms situation placated in West PapuaRelated news: Injured policeman discharged from Papua's Bhayangkara Police HospitalEDITED BY INE
--------------------