1) Refugees, Papua: Women at risk of giving birth to children in the middle of a weapons conflict

2) UN votes for better cooperation with PIF but China, Indonesia abstain
-------------------------------------------------------
A google translate. Be-aware google translate can be a bit erratic. original bahasa link at
https://www.bbc.com/indonesia/amp/indonesia-49233527?fbclid=IwAR3Wwqut6jyDvkdo40rzAj8McWp3N0KLOXHwzHMcONxXvxMStIjBmGSXzyg
Also a number of photos in article
1) Refugees, Papua: Women at risk of giving birth to children in the middle of a weapons conflict
Ayomi Amindoni BBC Indonesia  05 Agustus 2019
The women in Nduga and their children were forced to survive in the wilderness in the central mountains of Papua, to avoid armed conflict between the TNI / Polri and the Papuan pro-independence armed groups that lasted for the past eight months. Some of them were even forced to give birth in the forest. 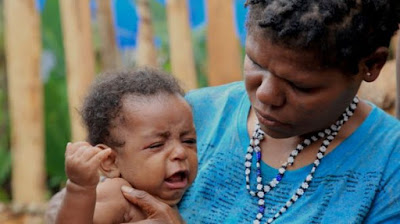 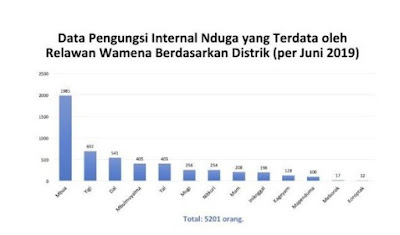 "Because that's actually how the Nduga people can live safely. Safe life according to them cannot be safe with the military, it cannot and until now there is still a warfare."
The Ministry of Social Affairs noted that there were at least 2,000 refugees scattered at several points in Wamena, Lanijaya and Asmat. Among these refugees, 53 people were reported dead. This figure is far below the data compiled by the Solidarity Team for Nduga, which recorded at least 5,000 Nduga residents were now displaced and 139 of them died.
Data from volunteers said that refugees in Wamena were scattered around 40 points. Most of them live in family homes.
Due to the large number of refugees arriving, one house or honai can contain between 30-50 people.
Visual production by Oki Budhi.
This article is part of BBC News Indonesia's special coverage of Nduga refugees and the conflict in Papua.
------------------------------------------------
https://www.abc.net.au/radio-australia/programs/pacificbeat/un-votes-for-better-cooperation-with-pif/11386238
2) UN votes for better cooperation with PIF but China, Indonesia abstain
On Pacific Beat with Catherine Graue
With a week to go until the annual Pacific Islands Forum leaders' meeting in Tuvalu, the UN General Assembly has adopted a resolution on enhancing the UN's cooperation with the Pacific Islands Forum — the region's peak body.
The vote was carried with 137 members in favour, and none voted against it.
But there were 12 abstentions, and among those countries which chose not to vote were China and Indonesia, who are both high-level partners of the Pacific Islands Forum.
The full text of the resolution is yet to be released but in a statement, the UN said the General Assembly urged the UN and the Pacific Islands Forum to strengthen their joint pursuit of sustainable development outcomes, while also underlining the need for coherent approaches to build resilience to to extreme weather in the region.
Similar resolutions have been adopted in the past — the last was in 2017.
The resolution follows the historic visit by the UN Secretary General Antonio Guterres to the Pacific in May, when he met with Forum leaders.
According to the UN's statement on the resolution, China's representative said the negotiation's coordinator had failed to consider his delegation's contributions and the concerns of other states, which is why China abstained.
Indonesia's representative said his delegation abstained for several reasons, one of which was the resolution's reference to the 2017 PIF communique.
Indonesia's representative also said he regretted that one member of the Pacific Islands Forum continued to interfere with Indonesia's domestic affairs, which is likely a reference to Vanuatu, which is the most vocal supporter of the West Papuan independence cause in the Pacific Islands Forum.
Duration: 4min 19sec
----------------------------
Posted by AWPA Sydney News at 1:38 PM