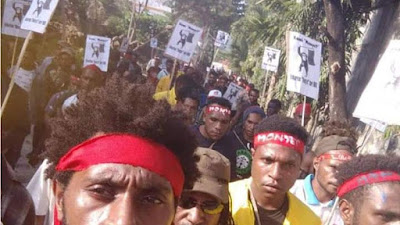 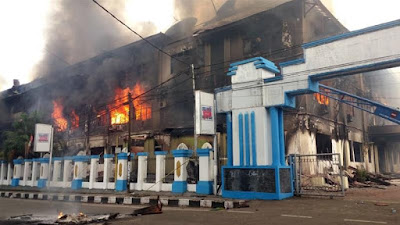 There were no immediate reports of casualties in Manokwari, where the demonstrations are still ongoing [Stringer/EPA]
Jakarta, Indonesia - Large demonstrations in Indonesia's West Papua region have turned violent as thousands of protesters, angered by alleged police abuse against ethnic Papuan students, burned public facilities and blocked roads.
In West Papua province's capital of Manokwari, protesters burned the parliamentary building and local stores, according to police and images obtained by Al Jazeera.
A building previously occupied by West Papua Provincial Governor Dominggus Mandacan was also burned, Indonesia's national police spokesman, Dedi Prasetyo, told Al Jazeera.
There were no immediate reports of casualties. The demonstrations are still ongoing.
"For now, we are still focusing on collecting the data on the casualties and trying to calm down the masses," he told Al Jazeera.
Images obtained by Al Jazeera showed the demonstrators, including many young students, waving the "Morning Star" flag, which is seen as a symbol of self-rule by Papuans.
"We are not white and red, we are morning star," the protesters shouted, in reference to the Indonesian flag and the Papuan banner. Individuals carrying the banned flag could face arrest and imprisonment of up to 15 years.
There are also demonstrations reported in the city of Jayapura, the capital and largest city of Papua, the country's easternmost province. Hundreds of people riding their motorbikes were seen joining the protest.
Al Jazeera also received reports that angry protesters forcibly took down the Indonesian flag outside the office of Papua Provincial Governor Lukas Enembe.
Indonesia's West Papua region is divided into two provinces, West Papua and Papua.
The demonstration on Monday erupted following the arrest last week of ethnic Papuan students living in Surabaya and Malang in Java island.
The students were accused of throwing the Indonesian flag into a sewer - allegations that they have denied in an interview with the local media, Suara Papua.
Responding to the report, the police locked down the dormitory of the Papuan students and fired tear gas to clear their rooms.
The Indonesia-based news website, Tirto, and other news agencies reported that the students were then subjected to racial abuse. They were reportedly called "monkeys" by bystanders, as they were rounded up by police.
The students were released from police detention on Sunday. But by then, tensions have already risen, with the West Papua National Committee (KNPB) calling on Papuans to join the protest against the government.
The region was a Dutch colony until the early 1960s when Indonesia took control, cementing its rule with a controversial referendum that followed.
The government in Jakarta maintains that West Papua region, which occupies the western half of the island of Papua New Guinea, is Indonesian because it was part of the Dutch East Indies which forms the basis of the country's modern-day borders.
A low-level armed rebellion by indigenous Papuans, who now make up about half the population after years of migration by people from other parts of Indonesia, has been rumbling ever since.
West Papua is the poorest region in the country, and there have been allegations of human rights violation taking place since then.
In December, violence also erupted in the province, killing at least 17 people and triggering a military crackdown.
Some 35,000 civilians have been forced from their homes as the security forces attempt to flush out the rebels from the forested mountains.
------------------
https://www.bbc.com/news/world-asia-49394035
5) Indonesia Papua: Local parliament torched in Manokwari unrest

19 August 2019 21:26 WIB
TEMPO.CO, Jakarta - President Joko Widodo or Jokowi has called on the people of Papua to restrain themselves following intense news of discrimination and racism against Papuan college students in Surabaya.
“My brothers and sisters, pace, mace, mama-mama, in West Papua, I know [all of you feel offended]. This is why I urge all of us as fellow countrymen to forgive each other,” said the President at the Merdeka Palace in Central Jakarta on Monday, August 19.
The president maintained that he was genuinely aware of the offense felt by the people of Papua following a discriminative encounter that was aimed at the students in Surabaya. However, the former Jakarta governor said forgiveness and patience were the better responses to the present situation.
“Believe me when I say that the government continues to preserve the honor and prosperity of pace, mace, mama-mama [Papuan words used to address adult Papuans] who are currently in Papua and West Papua,” said President Jokowi.
The riot that broke out in Manokwari, Papua, was a direct retaliation to the incident in Surabaya on Saturday, August 17, where Papuan university students were accused of disgracing the national flag on Independence Day. The incident was followed by alleged acts of discrimination and violence from a number of people against the students.
EGI ADYATAMA
—————————————————————
https://en.tempo.co/read/1237926/president-jokowi-calls-for-peace-following-west-papua-unrest
10) President Jokowi Calls for Peace Following West Papua Unrest
Translator:

19 August 2019 20:48 WIB
TEMPO.CO, Jakarta - President  Joko “Jokowi” Widodo immediately addressed the public unrest that happened in Manokwari, Papua, earlier today and called on Indonesians to stay composed and avert anarchy.
“I ask everyone to stay calm and refrain from anarchy. Be forgiving to each other, we are all brothers and sisters and fellow countrymen,” said the president to Tempo on Monday, August 19.
The president asserted that anarchy would only lead to widespread despair after he was briefed by National Police Chief Gen. Tito Karnavian on the condition in Manokwari.
Earlier today, public unrest broke out following an incident in Surabaya during the country’s Independence Day on August 17 where a dormitory filled with Papuan university students was raided by mass organizations and authorities following alleged flag mistreatment by some of the students.
Rumors were rife that the students were ousted from the region and became victims of violence, which eventually sparked rage among fellow Papuans in Manokwari.
“We must keep our composure and not be anarchic. It is our loss if we ruin public facilities,” said President Jokowi.
SYAILENDRA PERSADA
————————————
https://en.tempo.co/read/1237885/papuan-chieftain-calls-for-probe-into-surabaya-incident
11) Papuan Chieftain Calls for Probe into Surabaya Incident
Translator: Ricky Mohammad Nugraha   Editor: Markus Wisnu Murti 19 August 2019 19:15 WIB
TEMPO.CO, Jakarta - The leader of the Papuan Customary Community Organization, Lenis Kagoya, has called for a complete and thorough investigation into the case of racism and discrimination against Papuan university students in Surabaya.
Lenis said the probe was necessary as the incidents had triggered a series of riots in Manokwari, West Papua, today .
“The incidents in Malang, Surabaya, we must take matters into the realm of law. Who threw the stones, who threw the racial slurs, who ousted them, and who threw the [National] flag,” Lenis said in West Jakarta today.
Lenis lamented that the incident happened in Surabaya and Malang, whereas non-Papuan residents had always been welcomed and treated fairly sans discrimination in Papua. He asserted that the racial slurs shouted during the incident on Saturday, August 17, severely offended Papuans but he asked the Papuan community to stay calm.
“As a chieftain, I advise that the incident should not be exaggerated,” he assured.
Lenis Kagoya also called on fellow Papuans not use the incident as a justification to ruin public facilities of Papua. “Go ahead and voice your aspirations. But don’t ever burn public facilities. That is just like burning your own home. This is truly regrettable and should not have happened,” Lenis said.
The riot that broke out in Manokwari, Papua, was a direct retaliation to the incident in Surabaya on Saturday, August 17, where Papuan university students were accused of disgracing the national flag on Independence Day.
EGI ADYATAMA
------------------------------------
Posted by AWPA Sydney News at 3:45 PM