1) BEFORE DISMISSING THE MASS, POLICE CALL THEM “ MONKEY”

1) BEFORE DISMISSING THE MASS, POLICE CALL THEM “ MONKEY” 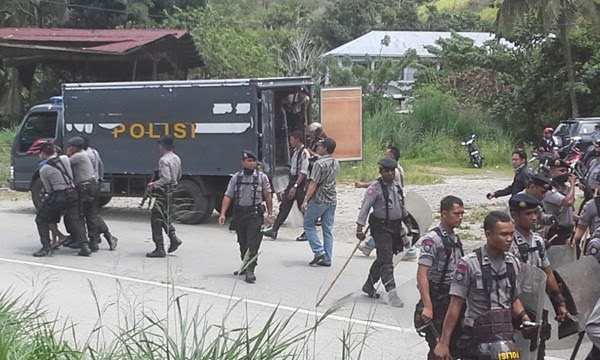 Some police officers were partly armed and barricaded roads (Jubi)

Jayapura , 2/4 ( Jubi ) – Members of the Students’ Solidarity Concern on political prisoners with Student Association Central Mountain were forcibly dispersed when they would hold a peaceful rally nearby campus gate of Cenderawasih University, Waena Jayapura , Papua on Wednesday afternoon ( 2/4).
The dismissal occurred when the protesters had been walking about 20 meters from a rallying point at the campus gate. Police officers who were on stand by junction blocked the road in order to stop the protesters who would like join other group.  Some police officers were partly armed and barricaded roads . From inside the barricade, could be heard,  a police officer said the word ” monkey ” three times to the mass.
Negotiation effort was done by one of the coordinators, yet was ignored a by the police unit chief. He firmly said ” If you keep walking, we’ll arrest, “.
Not too long ago, police arrested a coordinator and immediately secured in a vehicle that had been prepared. Protesters  who saw the arrest  spontaneously attacked by throwing rocks toward police officers. As a result, there was a backlash from the police by releasing several shots.
There is no update information whether any of the protesters was hit or not.( Jubi / Meki Wetipo/Tina )

Alfares at Dian Harapan Hospital, his face was bruised and swollen (Jubi)

Jayapura, 3/4 (Jubi) – Two students who were arrested by the Police on Wednesday (2/4) for leading a demonstration demanding the release of Papuan political prisoners said they were mistreated in detention.
“We were beaten like animals. Our bodies were covered with blood. The Police doctor visited us at midnight to clean us and examine the wounds,” Alfares Kapissa told Jubi on Thursday night (3/4) at Dian Harapan Hospital.
Kapissa and Yali Wenda were arrested by police for breaking an agreement with the police not to march during the protest. They were released at around 14:00 Papua time.
Jayapura Police Chief Adjunct Commissioner Senior Alfred Papare said on Wednesday the student leaders were detained for questioning. The Police had 24 hours to detain or release if no charges were pressed.
The students said kicked them and hit them with rifle butts and rattan canes.
A resident of Jayapura Selatan sub-district who was in Jayapura Police headquarters said he saw the two students injured when he was hauled off the police vehicle.
“I saw their faces and bodies bruised and bleeding. I also saw an officer pointed a riffle butt asking whether they used it to beat the students. It might be a code between the police,” he said.

Yali’s ear being stitched after were wounded by police (IST)
When met Alfares at Dian Harapan Hospital, his face was bruised and swollen. “The doctor forced us to change our clothes to get rid of evidence. We were beaten from head to toe. My head was injured and I thought they broke my ribs,” he said while showing his wounds and blood spots on his head.
A Papuan human rights activist, Markus Haluk, said Yali Wenda was also injured on his ear. “Now they have difficulty sitting and eating. Their bodies are still trembling,” said Haluk.
The Chairman of Student Executive Board of Cenderawasih University, Yoan Wanbipman said they have sent a letter to the Papua Police Chief to set up a meeting. The meeting between the students, lecturers and the police is set for  Friday (4/4). (Jubi/Victor Mambor/rom)
-------------------------------------------------------------------------------------------
3) PAPUAN BROTHERHOOD URGES FREEPORT TO NORMALIZE OPERATIONS

Jayapura, 3/ 4 ( Jubi ) – Papua Provincial Government is determined to strengthen the Papuan People’s Assembly (MRP) to allow them to monitor the use of autonomy funds after passage of a autonomy bill by national parliament.
“If it is passed, the authority of the MRP to oversee the use of special autonomy fund will be regulated. For that reason, we continue to strive for this bill to be passed soon,” Papuan Governor Lukas Enembe said in Jayapura on Thursday ( 3/4 ).
“We will strengthen the MRP by preparing the draft and will discuss it with the Papua Legislative Council. So far, MRP has no legal basis  to supervise the performance of the government,” he explained.
He added, the authority should be governed by rules that have validity nationally .
” So far, MRP only deals with issues of culture, religion and women and  it must be empowered by law. Our target is the regulation should be passed by the Papua Council before August 17, 2014,” he concluded . ( Jubi / Alex/ Tina )
-----------------------------------------------------------------------
http://tabloidjubi.com/en/?p=1889
5) TRANSMIGRATION PROGRAM NO LONGER IMPELMENTED IN PAPUA
Jayapura, 1/3 ( Jubi ) – The Department of Labor and Demography in Papua province said that there will be no transmigration program in Indonesia ‘s easternmost region.
” The other provincial governments in Indonesia still consider implementing the transmigration program, but not for the Province of Papua,” department head Yan Piet Rawar said in Jayapura on Thursday (3/4) .
To control the population in Papua, the provincial government already has a provincial regulation (Perdasi) No. 11 of 2013. “The population of Papua should reach 20 million before a new transmigration program can be implemented, ” he explained.
When asked about the impact of the influx of people from outside Papua, he acknowledged the number increased every year but was under control.
“We’ve socialized Perdasi No. 11 of 2013 to the regencies and cities in Papua as people from outside who came to Papua is growing each year. One of the reasons is employment opportunities, ” he said.
He hopes that this regulation can be implemented well if there is cooperation and coordination between the regencies and cities in Papua.
” Yes, the people who enter Papua can not be easily recorded and hopefully the implementation of e-ID card can collect accurate population data, ” he said.
While, the Governor of Papua Lukas Enembe said, currently Papuans do not need new provinces but more welfare in all sectors.
“So far, about 60 percent of Papuans are not ready for new provinces. If we force the split, it will create new problems,” said Luke. ( Jubi / Alex/ Tina )
Posted by AWPA Sydney News at 11:18 PM