1) Former Merauke regent gets a year in prison for graft

A panel of Jayapura Corruption Court judges has sentenced former Merauke regent John Gluba Gebze to a year in prison and fined him Rp 50 million after he was found guilty of graft relating to the procurement of souvenirs made of crocodile skin worth Rp 18 billion.
The panel, which comprised presiding judge Halim Dolman Sinaga and two other judges Petrus Maturbongs and Irianto P Utama, agreed that the defendant was proven to have abused his authority as regent and caused state losses.
The defendant was deemed to have clearly violated Law No. 20/2001 on anticorruption and the Criminal Code (KUHP).
Commenting on the ruling, both John’s lawyer Iwan Niode and prosecutor Yazosisokhi Zebua said they would consult before issuing any statement regarding the ruling.
The ruling was lighter than the six years in prison and Rp 500 million fine requested by prosecutors.
The case originated when Merauke regency decided to give out crocodile skin souvenirs. John initially argued that giving away souvenirs was his way of promoting souvenir producers, but prosecutors disagreed, saying that John had not demonstrated a strong promotion strategy, with the venture representing a huge waste of money. (dic) 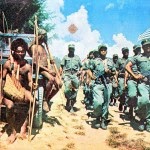 That the people of West Papua independence already memanifestokan December 1, 1961 , but Indonesia, the U.S. and the UN have been destroyed by lust and exploitation territorial expansion through the annexation of West Papua May 1, 1963 . 's Evidence UN denial of the right of self-determination which is being raised by the Parliament of West Papua ( Niuew Guinea Raad ) at that time .

Every 1st of May , Indonesian authorities and the U.S. celebrating colonize and exploit West Papua , but the people of West Papuans commemorate as the beginning of human suffering and destruction of natural and Papua .

UN , Indonesia , the Netherlands and the United States should - by spirit -inducing initiatives decolonization Papuan independence initiated by representatives of the nation of Papua ( West Papua Parliament ) December 1, 1961 , but they actually gave birth to neo colonialism of Indonesia through the transition of power from the Dutch colonial administration to colonial new , namely Indonesia on May 1, 1963 .

West Papua National Committee [ KNPB ] world community solidarity calling for the independence of West Papua . We also hope that the members of the State and Party Parliamentary around the world joined in the International Parliamentarians for West Papua ( IPWP ) through www.ipwp.org , which is currently 80 members have joined and signed a declaration of the right of self-determination for West Papua .

KNPB called on the people of West Papua to dismiss themselves and commemorate May 1, 1963 with the action open , worship , and or free speech with the goal of reflecting and rejecting 51 years of oppression brought neo- colonialism in Indonesia.
" We Must End "
Abepura prison , 25 April 2014
Victor Yeimo
Chairman KNPB
-------------------------------------------------------------------
HTTP://EN.TEMPO.CO/READ/NEWS/2014/04/25/114573132/MISS-CENDRAWASIH-UNIVERSITY-FINALISTS-LEARN-HOW-TO-MAKE-BATIK
FRIDAY, 25 APRIL, 2014 | 12:46 WIB
3) Miss Cendrawasih University Finalists Learn How to Make Batik
Zoom Out Zoom In Normal
TEMPO.CO, Jakarta – Dozens of finalists of the 2014 Miss Cendrawasih University in Jayapura have concluded their training session on how to make the Indonesian traditional clothing of batik.
The finalists were trained by Jimmy Afarr, the owner of batik numbay [Jayapura].  Jimmy toldAntara in Jayapura on Thursday that “the training has just ended.”
According to him, the training sought to give the necessary knowledge of batik to the finalists and would-be models.  “Especially for Papuans, so they don’t just wear Papuan batiks but also know the philosophy of the painting on the dress,” he said.
Jimmy said a model must also know how to make batik instead of just wearing them. He hoped the finalists could now make batik after the training.
Miss Papua 2013 Maria Fransiska Tambingon, meanwhile, said the young generation of Papua must preserve the existing Papuan art and culture, including batik. “The young generation of Papua must learn how to develop Papuan batik and preserve it,” she said.
Delince Gobay, a finalist of the beauty pageant, said he was grateful to have received the knowledge of batik, adding that it was the first batik training session.
Editor: Unggul Tri Ratomo

Jayapura , 24/4 ( Jubi ) Three people have been arrested and another surrendered by his parents after clashes triggered by a drunken in Sorong, police said.
“We are still looking for one more person and negotiating for his surrender,“ Papua police chief Inspector General Tito Karnavian said in Jayapura on Thursday ( 24/4).
“The clash occurred because these offenders were influenced by alcohol and disseminated false information. ”
Tito said police were seeking to re-activate the Interfaith Communication Forum (FKUB ) and the Inter- Tribal Harmony Forum ( Forkas ) as Sorong is very heterogeneous.
“However, religious and inter-ethnic tolerance is already quite well and need to be improved and maintained,” said Tito.
The four suspects are identified by their initials as AL, who is accused of battery, VCT and YSH who are acccused of throwing stones at a mosque and ALS, who allegedly pelted the Sorong Hajj  dormitory with rocks. ( Jubi / Indrayadi TH/ Tina)
(Visited 5 time, 5 visit today)
Posted by AWPA Sydney News at 12:59 AM