1) OPM in battle, No destruction or threat to PNG

1) OPM in battle, No destruction or threat to PNG
2) Freeport helps distribute  election materials in Mimika
3) SMUGGLING OF PROTECTED BIRDS FOILED
--------------------------------------------------------------------------------------------------------
http://www.islandsbusiness.com/news/papua-new-guinea/5061/opm-in-battle-no-destruction-or-threat-to-png/
1) OPM in battle, No destruction or threat to PNG
Tue 08 Apr 2014
VANIMO, PNG POST COURIER) ----Two Indonesian soldiers and OPM rebels were reportedly injured in an eight-hour gunfight last weekend at the Papua New Guinea-Indonesian border near Wutung in West Sepik Province.
A PNG intelligence officer, who is currently on the ground, told the Post-Courier that the OPM have taken to the jungle on the PNG side of the border after the confrontation with the Indonesian military, which continues to increase its presence.
The situation is quiet but tense, he said while emphasising that the PNG Defence Force could not contain and prevent members of the OPM from entering PNG territory, as they were only a section comprising 10 to 15 soldiers.
The soldiers are part of a company from the PNGDF Vanimo forward base, which is part of the 2nd Royal Pacific Islands Regiment based at Moem Barracks in neighbouring East Sepik Province.
The primary objective of the PNGDF soldiers deployed to the border is to conduct surveillance to ensure the safety of PNG citizens, especially Wutung villagers who live a kilometre from the border posts and not far from the scene of the fighting.
Members of the OPM last week pulled down the Indonesian flag and hoisted their West Papua and United Nations flags before embarking on a path of destruction, which saw the burning of Indonesian government facilities at the border post and a gun battle with the Indonesian police and military.
The gun battle ceased after dark as reports emerged of Indonesian military presence rolling into Batas in recent days. PNG Foreign Affairs Minister Rimbink Pato confirmed on Sunday that a diplomatic note was given to the Indonesian government highlighting PNG’s concerns over recent developments on the border between the two countries.
However, Opposition Leader Belden Namah yesterday warned that failure to address the issue could have long-term implications for bilateral relations.
“I have stated on numerous occasions that the border is a time bomb ticking away. I call on both the PNG and Indonesian governments again, to take immediate steps to address key issues affecting our border, and in particular the need for a more precise demarcation of the international land border,” he said in a statement.
Wutung Villagers are also frustrated at the lack of action from authorities and have petitioned the PNG Government to speed up the reopening of the border post so they can return to their gardens and normal lives.
“Wutung people have most of their gardens across the Indonesian border, where 80 percent of their land is located and closing of the border will prevent them from accessing their gardens to harvest food for their daily consumption,” said the intelligence official.
Meanwhile, the rebel group Organisasi Papua Merdeka, along the PNG-Indonesia border, will not harm or destroy anything on PNG soil, says an OPM insider.
He said the rebels who identify themselves as the revolutionary army for the Free West Papua Movement have verified that nothing has been destroyed and no people will be harmed.
They said claims that the PNG government’s border administration facility was burnt down is not true. The government lodged an official protest note on Sunday with the Indonesian government saying that rebels had razed the local border facility to the ground.
The insider confirmed, however, that reports the rebels lowered the Indonesia flag and raised the West Papuan and UN flags are true. According to him, the incident occurred last Thursday when the Defence Force was at the Batas area. An eyewitness has verified these claims and assured the people of PNG that all property is intact and no harm has come to citizens following the incident.
The recent report which implies that the rebels are building up in numbers and may be a threat to the lives of Papua New Guineans have been rejected by the insider.
“We just want an independent West Papua, our fight is with Indonesia and not with Papua New Guinea,” said the insider.
-------------------------------------------------------------------------------------------------------
http://www.thejakartapost.com/news/2014/04/08/freeport-helps-distribute-election-materials-mimika.html 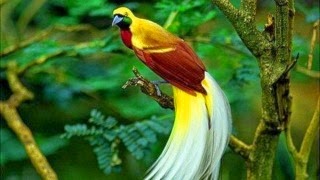 The bird of paradise (fotohewan.info)

Jayapura , 7/4 ( Jubi ) – Quarantine officials in Jayapura foiled an attempt to smuggle four birds, three birds of paradise and a king cockatoo out of Papua on Monday (31/3).
“At ship’s entrance, the officers found a carton of cigarettes. When checked, there were birds in a box hidden under sacks of rice,“ the head of Agricultural Quarantine Class I Jayapura , H. Suryo Irianto Putro said.
“Before the owner was found, the ship had already left. So, the officers seized the birds and took them to the Office of Agricultural Quarantine. Unfortunately, one of the birds of paradise died. We plan to hand it to Papua Natural Resources Conservation Center on Tuesday ( 8/4),” he added.
The head of Supervision and Enforcement at the Jayapura Quarantine Agency, Hendri Lumbaa Boas, said officers immediately reported the finding to the Center for Agricultural Quarantine Agency, the Governor of Papua and the Police Chief.
“We will send them back and hope that the people of Papua can participate in protecting the  wildlife, ” Boas said. ( Jubi / Arjuna/ Tina)
Posted by AWPA Sydney News at 11:51 PM