Benny Wenda is currently in Australia ahead of the launch of a Free West Papua Campaign office in Perth this Sunday 27th April.
The office will work closely to help co-ordinate activity in Australia with active groups in Melbourne, Sydney, Canberra, Darwin and Brisbane, to raise awareness and lobby Australian politicians to support the right of self-determination for West Papua.
Speaking ahead of the launch, Benny Wenda expressed his gratitude to the Australian Government for allowing the office to open in line with shared values of democracy. The opening of the Australian office follows on from the opening of three other offices last year in Oxford,UK and The Hague, Netherlands and Port Moresby, Papua New Guinea. 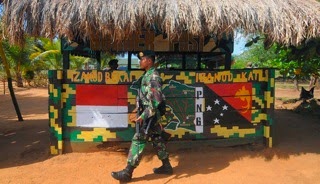 
TEMPO.CO, Jakarta - A member of the Indonesian Military (TNI) identified as Second Sgt. Rahman Hakim from Sentani 751 Infantry Battalion was shot dead by an unidentified man at the TNI post in Gurage District, Puncak Jaya regency, Papua, on Friday, as reported by Antara News.
It was also reported that a civilian identified as Polang Harahap was also shot and in critical condition.
Cendrawasih Military Command spokesman Col. Rikass Hidayatullah said the two men were shot by unidentified men. Rahman took a shot to his shoulder while Polang was hit on his temple.
"The victims have been brought to Mulia General Hospital while soldiers have been deployed to pursue the perpetrators," he said.
Rahman's body was handed over to his family to be buried.
The Gurage post has a history of being ambushed. According to military records, many lives have been lost at the post.
ANTARA
Posted by AWPA Sydney News at 1:59 AM