A google translate of article in Majalah Selangkah. Be-aware google translate can be a bit erratic.
Original bahasa link at
http://majalahselangkah.com/content/-polisi-bersenjata-lengkap-kembali-bubarkan-demo-damai-smptn-papua 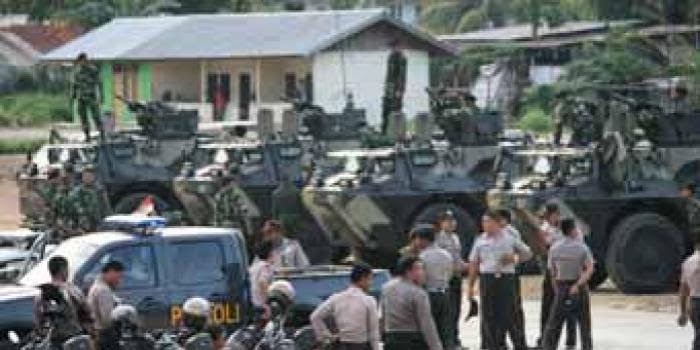 Police in Papua with its attributes while going down the road dissolve any peaceful demonstration by the people and , students. Photo : Ist .

At 11:30 , the police composite of some units come fully armed action that is mass disperse students protesting peacefully .

Tough argument occurs between armed police and students with mouthpiece microphone in one hand .

The police then forcibly dispersed students who use their freedom to express their opinions , to democracy , to peace .

Police later occupied by armed Uncen gate , and remained at that point for a long time .

The police had also issued a four-letter words to the students .

" Elementary students Bodok , " shouted the cop pulling a shot . Some students provoked emotions and pelted the police with stones .

Majalahselangkah.com observation , students confused and panic over the peaceful attempts to argue that they were immediately silenced by armed police . Residents panicked about Housing III , especially after hearing the shots .

When the news was revealed , the state is still not conducive . Students were forced to enter the campus again , run away, as confronted with guns at the ready . There is a student newspaper were arrested , but it is still not clear . Conditions less safe . ( HY / CB / MS )

Protesters in New Zealand have joined international action urging Indonesia to release West Papua's political prisoners.
According to the group, Papuans Behind Bars, at least 76 political prisoners are being held in jails in West Papua.
A vigil will be held in Auckland tonight while activists in Wellington gathered outside the Indonesian Embassy this afternoon.
Our reporter Amelia Langford was at the Wellington protest.
The small group held photos of Papuan political prisoners and remained silent with their hands bound as a sign of solidarity with those imprisoned. Green Party MP, Catherine Delahunty, who took part in the protest, says people in West Papua have been jailed for exercising their basic democratic rights.

Catherine Delahunty gives the example of Filep Karma who was jailed for 15 years for raising the West Papuan Morning Star flag. She describes West Papua as the Palestine of the South Pacific and says the New Zealand Government should take action.

CATHERINE DELAHUNTY: The very least New Zealand could do is call on Indonesia to set these prisoners free, they are not criminals, they are political prisoners who should be set free, and New Zealand should stop funding the training programme for the police in West Papua instead of which, where they they should be calling on Indonesia to stop the human rights abuses.

Another Green MP, Eugenie Sage, says the environmental impact of Indonesian rule in West Papua is also a concern.

EUGENIE SAGE: We have a right to freedom of speech here, we can express our views on anything, we can stand and protest, they do not have that right in West Papua, the environmental damage that's occurring under the Indonesian regime, the inability of people to have a voice and protest about that is why I am here.

The Wellington protest was a small crowd, with a turnout of only a handful of people. But one of the protesters, Julianne Leggett, says New Zealanders would be shocked if they knew more about West Papua.

JULIANNE LEGGETT: I think it is outrageous the way the people of West Papua are being treated - their aspirations for political autonomy are being legitimately expressed through peaceful protest.

Another protester, Gabrielle George, says a lot of young people don't know anything about West Papua.

GABRIELLE GEORGE: The fact that not many people know about it, and the fact that the information is so stifled from within Indonesia, so it is important to make it public, make it more widespread throughout New Zealand, and for young people as well to know that so close to us, there is injustice going on.

Gabrielle George says she is hopeful that her actions can help West Papua and points to East Timor's independence after years of protest over Indonesian occupation. Protests outside Indonesian embassies are taking place around the world, including London and Australia.
Posted by AWPA Sydney News at 1:34 AM