1) Letter in todays SMH
The Indonesian Foreign Minister Marty Natalegawa should be congratulated for raising concerns about Australia’s treatment of asylum seekers and our detention centres. However, it’s a pity he does not show the same concern for the people of West Papua where the Indonesian security forces regularly commit human rights abuses.
It is also a shame our government is reluctant to raise the abuses with the Indonesian government. Anzac Day is a national day of commemoration. We should also give a thought to the unfree people in our region.
Joe Collins Australia West Papua Association, Mosman

Although brought terror . These activities still take place . " It is important that the chairman of the anniversary events KNPB KNPB Merauke region , openly giving an open statement about the boycott Flyer Distribution Presidential Election and Referendum openly to the people and the launch of the book " History of Papua " first edition compiled by KNPB Merauke region , " said Wopay .

In agreements KNPB the third anniversary , Parliamentary Secretary Merauke region Peterus Katem said that , kehadiaran TNI / police in KNPB secretariat and surrounded the anniversary events this indicates that in the face of those who come to besiege us this very phobia because they can eat here , this country Sagat free Papua so scared when they have to come besiege us even though we only had Secretariat held a thanksgiving prayer .

" One thing Indonesia know that 2504 was not a strong resolution to the Republic of Indonesia in Papua . Resolution may be revoked at any time when the Supreme Court of Papua sued in the International " , said Katem

The same was delivered by the Chairman of the Regional Parliament ( PRD ) Region Merauke , Mrs. Panggresia yeem . He said that Resolution 2504 is based hasib Act of 1969 was invalid because the agreed and doing talks at international level at the time it was done by the State both Indonesian and Dutch colonists together .

" So we do not know anything Papuan people about the Act and its results. Therefore we push the people of West Papua to Merauke will continue to fight for mentukan own fate Us Through International mechanisms that Referendum " , strictly speaking . ( wd ) 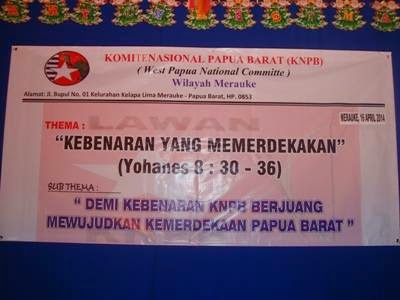 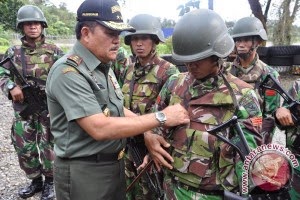 Sentani (ANTARA News) - The Papua Regional Military Commander Mayor General Christian Zebua appealed to the Sentani citizens to stay calm and not be provoked by people who triggered riots on April 20, 2014, in Sorong, West Papua Province."We have advised all the citizens in Sorong to not be provoked by the problem that occurred in Sorong, and it was not a religious or tribal conflict. It was rather a personal conflict between a drunk person who lashed out at people returning from the mosque," Commander of Cendrawasih Regional Military XVII, Christian, informed in an interview to ANTARA News here on Tuesday.He also requested the people to show restraint and monitor the security."I have received a brief message that contains very provocative news, and it is all false," Christian pointed out.The Commander hoped that the people will not relate the short message to the personal clash, while the police is still investigating and tracing the culprits."No mosque or church was destroyed in the clash. The news was false," Christian asserted.The Commander also urged the media to act responsibly, so that the people get to know the true facts behind what occurred in Sorong."We hoped the incident will not disrupt the Sail Raja Ampat event, which is being organized in West Papua. President Susilo Bambang Yudhoyono is also scheduled to be part of the event in Raja Ampat," Christian remarked, adding that the clash had no connection with the Sail Raja Ampat event.He called on the people in the West Papua Province to maintain law and order.The incident occurred due to criminal acts that triggered a clash in Sorong City. Several police and Indonesian Military personnel also suffered injuries after being hit by rocks and arrows as they were trying to enforce law and order.According to a report received from the location, a soldier of the Indonesian Military suffered injury after being hit by an arrow. The Chief of Sorong Resort Police was also wounded after being struck by a stone, while attempting to gain control of the situation in Yohan shopping center, Sorong. ***1***(UU.B019/INE/a014)EDITED BY INE(UU.B019/A/KR-BSR/A014) 22-04-2014 16:33:32
Editor: Priyambodo RH
Posted by AWPA Sydney News at 1:38 PM