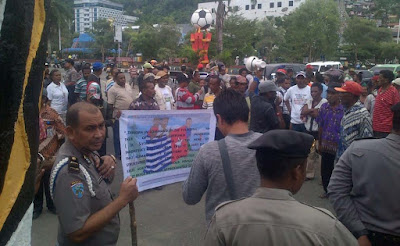 Papuan pro-independence supporters named People Community Dok 7,8,9 Tanjung Ria in front of Papua House of Representative during the protest on Wednesday (15/6/2016) – Jubi/Arjuna Pademme
Jayapura, Jubi – The Chairman of Papua Legislative Council blasted the police for blocking hundreds of Papuan pro-independence supporters named People Community Dok 7,8,9 Tanjung Ria as they tried to  voice their aspirations at Papua Parliament’s Office on Wednesday (15/6/2016).
The politician from Democrat Party criticized the Police personnel who closed and guarded the entrance gate of Papua Parliament’s Office to avoid the protesters coming to the parliament’s yard. Wonda also apologized to Papuan people who could only give oration at Taman Imbi, Jayapura City after the Police’s restriction.
“The entrances of parliament building has been closed and guarded by the Police. We weren’t elected by the Police but by the people who are suffering selling the beetle nuts, being abandoned. This is their place. We were elected by them to talk about their needs and aspirations; to protect them. We only knew this the house of people,” said Wonda on Friday (17/6/2015). According to him, it’s not because of the councilors do not want to meet with the protestors, but usually they could meet them when they were at the parliament’s yard. “Papua Legislative Council is not Papua Police. The parliament building is the house of people. This is the place they could express their aspiration. They are free to talk about anything. This is the place. It is not allowed to close and guard the entrance of the building. Don’t let the permit becoming a reason to prohibit people for entering their house,” he said.
He said the Police should let the protesters come to express their aspiration to the parliament, whatever it is. After they did it, they will disband by themselves. “It might not possible that Papua will get independence by tomorrow. The way used by the Police to close the entrance wasn’t right. The host of the building is the councilors, not the Police. It is just not right, and shouldn’t be repeated,” he said. (Arjuna Pademme/rom)
———————————————-
http://tabloidjubi.com/eng/minister-of-trade-launches-brewing-papuan-coffee-with-pride-campaign-in-dogiyai/
2) Minister of Trade Launches ‘Brewing Papuan Coffee with Pride’ Campaign in Dogiyai
18 June 2016
Jayapura, Jubi – After successfully promoting Indonesian coffee at the Specialty Coffee Association of America (SCAA) Expo 2016, the Indonesian Minister of Trade Thomas Lembong invited coffee lovers and the international community to get a taste of Papuan coffee through “Brewing Papuan Coffee with Pride” campaign.
The program launch was held at Dogiyai Regency, Papua on Saturday (11/06/2016). This event is part of part of “Work and Excellent Papua Movement” run by Papua Working Group with fully support of the Indonesian Ministry of Commerce.
“Papua Province has a potentially world class coffee. It has become one of coffee-producing regions in Indonesia that is in demand, in addition to Gayo, Mandailing, Java, Toraja, Sumatera, and Sulawesi coffees,” said Lembong said in a press release this wekk. He said Papua Provincial Plantation Office recorded there are 16 coffee farmers in Papua distributed in the regencies of Jayawijaya, Tolikara, Lanny Jaya, Pegunungan Bintang and Dogiyai. He explained some coffee lovers in Jakarta are also participating in this campaign. Along with the Central Government, they were invited for educating the cultivation technic, post-harvest processing and marketing.
“The empowerment and education activities are useful to improve the welfare of farmers to be more optimal. We know the consumers are willing to pay the cost for a cup of delicious coffee, but unfortunately the farmers are not well informed about the price of coffee in the market,” said the minister. Dogiyai Regency is divided into 10 sub-districts which all have potency of coffee, but its production is not yet optimal.
In this regency, the Minister of Commerce closely monitored the phases of coffee processing from A to Z. Coffee processing in Dogiyai is still done traditionally. The machines such as grinding machine used in the process were from Dutch era. Drying and pilling process are done manually; the coffee beans are also roasted on the stove and grinded manually.
Coffee plantation in Dogiyai Regency is Dutch missionary legacy from 1890s. In that era, most of Dogiyai residents are coffee farmers. But along with time changes, the local people are slowly to plan the coffee and become the construction workers for instant cash. Earlier, the Ministery of Commerce also monitored a coffee farm at Tolikara Regency and talked with the local coffee farmers. He expected the Papuan coffee could be the pride of Papuan people and become a commodity to improve the welfare of Papuan people.
The Acting Dogiyai Industry, Trading and Cooperation Office Andrias Gobai revealed Dogiyai Regency has five coffee small enterprises, one of which is fostered by Catholic Church Pastoral. Besides Dutch heritage farms, there is one-hectare coffee plantation manage by SMP Yayasan Pendidikan Sekolah Katolik (Junior High School of Catholic School Foundation).
“The school includes the coffee education in their curriculum in which the pupils were taught of coffee picking and processing at school. We hope, Papuan coffee, in particular from Dogiyai with its Arabika Moanemani coffee could penetrate the export market within next three years and could be served in the National Sports Event in Papua in 2020,” said Gobai. (Agus Tebai/rom)
-----------------------------------------
Posted by AWPA Sydney News at 2:40 AM