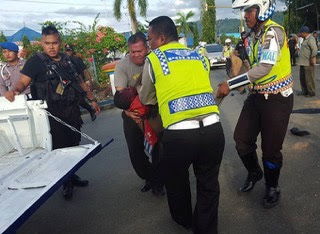 Police in Nabire in the Indonesian-ruled province of West Papua carry the body of teenager Oen (Owen) Pekei, to a pickup truck after he was shot dead. Image: West Papua Media/UmagiNews
Australian-supported Indonesian police special forces have shot dead a teenage Papuan high school student in central Nabire city, West Papua, reports West Papua Media.
The shooting took place on Monday in an “apparently premeditated ambush without provocation, according to credible reports and witnesses from the scene”.
The student was unarmed , reports West Papua Media.
Local independent media in Nabire, UmagiNews, are reporting that the extrajudicial killing occurred as the high school students were passing by the heavily armed police patrol near a roundabout in central Nabire.  West Papua Media stringers have confirmed these reports.
Oen (Owen) Pekei, 18, a student from class 2, YPPGI (Senior High School) Karang Mulia Nabire West Papua, was shot dead at 5pm local time, Monday, after being chased by at least three vehicles full of heavily armed, militarised police, according to witnesses.
One witness, whose name has been withheld for protection, told UmagiNews that Pekei was seen riding on a motorbike carrying a noken bag bearing the outlawed Morning Star pro-independence symbol. Oen (Owen) Pekei … the 18-year-old student who was allegedly shot by Indonesian special forces police on Monday. Image: West Papua Media/UmagiNews
Police gave chasePolice gave chase with three motorbikes, three unmarked police vehicles, and a truck full of fully armed and armoured Densus88 anti-terror police in balaclavas joined the chase.
Pekei was herded into an ambush area, where more Densus88 armed members of the police were awaiting him at three points, according to the witness.
Pekei was then shot in front of the new city complex at the Nabire regent’s office, allegedly from several directions simultaneously.
UmagiNews has published a series of diagrams given by witnesses showing from where different armed units shot Pekei.
One shot from Telkom head office, the second from within the memorial monuments, and the third from the D88 cars of Dalmas Porles Nabire.
Unconfirmed reports seen by West Papua Media stringers allege that among the shooters, both waiting and chasing Pekei, were a heavily armed patrol of black clad special forces police belonging to the Australian-trained and funded counter-terror unit Special Detachment (Densus) 88.
Densus88 has been used extensively for several years to conduct extremely violent repression against Papuan civilians engaged in peaceful acts of free expression, and is currently deployed heavily across Papua, whilst still receiving funding and training from the Australian Federal Police.
Motive unclearThe motive for shooting is not clear, however police have denied – in the military run colonial media outlet Nabire_Net  – that they shot Pekei, claiming instead that he died in hospital after hitting his head during the crash.
West Papua Media has published photos of Pekei – provided for publication by his family with permission – showing the entry wound caused by a bullet, which is inconsistent with road impact at low-speed. Warning: Images on this weblink may be distressing for some.
However, human rights observers told UmagiNews that questions arose that if Pekei was considered a road accident victim who was unconscious, why he was dumped in the mortuary instead of receiving an attempt to revive him in the emergency room of the hospital.
Other circumstances surrounding the shooting have not been confirmed at time of writing, and Indonesian police in Nabire have refused to answer phone and SMS messages from West Papua Media and local stringers.
A human rights monitor in Nabire who exposed the news observed that the “Motive appears unknown (as) conducted by the police, but people of Papua demand the Indonesian state carries out a just ‘crack down’ on any human rights violations that occurred”.
This shooting is not the first time an event like this has occurred. On 5 December 2014, the Bloody Paniai incident occurred that left four unarmed Papuan teenagers dead and 17 more Papuans injured when the Indonesian army and police opened fire on peaceful protesters in Paniai.
Some Papuans who gathered outside the Regent’s office after the killing told UmagiNews that they “questioned the Indonesian government’s seriousness in resolving human rights violations by the Indonesian military”.
“Bloody Nabire has returned, the security apparatus of the Republic of Indonesia is shooting the indigenous people of West Papua, using the tools of State (guns)”.
Images of the scene at West Papua Media
———————————————————————
A google translate. Be-aware google translate can ben a bit erratic.
original bahasa link at
http://suarapapua.com/2016/06/29/seorang-pelajar-ditembak-mati-polisi-dprp-minta-kapolda-papua-bertanggungjawab/
2) Owen Pekei case, DPR Minta Papua Police Chief Responsible
Writer Stephen Yogi -June 29, 2016 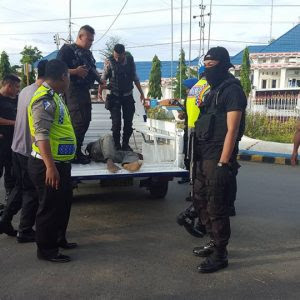 Police officers and the victim at the scene (Photo: Doc. Rius Douw)
NABIRE, SUARAPAPUA.com - Although it has been denied by Nabire police station, the death of Owen Pekei (18) are required to be addressed seriously at once explained to the victim's family affairs chronology of events.
Laurenzus Kadepa, member of parliament of Papua Province, said, whether because of a bullet or pure traffic accidents (laka then), the case should be presented honestly to the public especially the families of the victims.
Although the motive and the chronology of events mazy, said Kadepa, appropriate recognition of the victim's family, in contrast to the police explanation. Owen Pekei, grade II SMA YPPGI Nabire, according to the family, was shot dead after being pursued because of not wearing helmets and carrying nokeng patterned Morning Star, Monday (06/27/2016) afternoon.
Presented, if true testimony of the family a lot after seeing the condition of the victim, authorities should bertanggungjawabkan. Because, he said, the reason penembakannya unnatural. "When properly due to the shooting, the police chief had to intervene to check his men at Nabire police station," he told suarapapua.com, yesterday morning.
Kadepa remind, lives only in God's hands. "Humans are not entitled to, and do not do the shooting because it is not a solution, it adds to the problem. These inhuman acts, if true culprit very biadap shot, "he said.
He called the officers very unnatural reasons. "The reason Owen Pekei not wear a helmet and bring nokeng BK display was very unnatural. And if officials anticipate the activities July 1, also very unnatural, because it should not take the life of innocent people, "said Kadepa.
The victim named Owen Pekei, students in high school YPPGI Nabire, Class II, Department of IPS. According to the family, the victim was shot while riding a motorcycle in Jalan Merdeka. At that time he brought a woven patterned nokeng Morning Star flag.
Kadepa also questioned whether the victim has been the DPO related crime is extraordinary? What happens when the opposition uses the weapons to the security forces?
"The reason must be strong to easily escape the bullets. Families of the victims say, the boy was only a student. Not criminals. Why should it be shot? It must be clarified, "he said.
To that end, Papua Police chief asked to immediately open to the public events. "Papua Police Chief should be the law of all, who ruled until doing," he said again.
In general, Kadepa asserted, the security forces stop making new cases in Papua, especially the removal of the lives of people. Therefore, the state has commitments would resolve human rights violations and promised not to fire on civilians on Earth Cenderawasih.
"The efforts of the state to solve cases of human rights violations and the government's promise to the international community to no longer commit human rights abuses, I think I'm good. But with this incident, all that effort just a ruse, "said Kadepa.
Announcers: Stephen Yogi
Editor: Mary Monireng
------------------------------------------------
Posted by AWPA Sydney News at 2:37 PM