Over the past few days, around 600 West Papuan people have been reportedly arrested simply for peacefully demonstrating to call upon the Africa Caribbean Pacific (ACP) Summit to support West Papuan self-determination.
The Africa Caribbean Pacific (ACP) Summit being held in Port Moresby, Papua New Guinea is bringing together heads of state and other government representatives from around Africa, the Caribbean and the Pacific. We West Papuans are making our plea to the ACP as a cry for help because we are being brutally suppressed and silenced under Indonesian military occupation and colonialism. 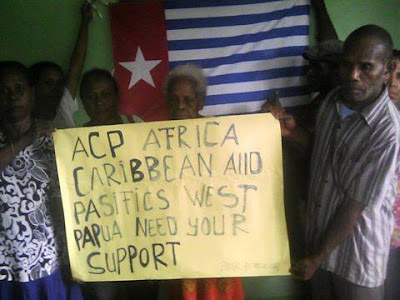 West Papuan elders hold up a message calling for the Africa Caribbean Pacific summit to support their calls for self-determination. May 31st 2016.

Across much of Africa, the Caribbean and the Pacific; colonialism has ended but in West Papua we continue to endure the horrors of colonialism and genocide with over half a million West Papuan people estimated to have been killed ever since West Papua was first occupied by Indonesia in 1963, and later illegally annexed after the fraudulent Act of NO Choice. Therefore we are calling on our Africa Caribbean and Pacific family to please support us in solidarity with our ongoing struggle against this brutal colonialism, racism and genocide.

West Papuans in Jayapura call for the Africa Caribbean Pacific summit to support West Papuan self-determination. 31st May 2016.
This week there were rallies held across West Papua as well as in several Indonesian cities as the people of West Papua took to the streets in our thousands to peacefully call for the ACP to support our fundamental right to self-determination as the Melanesian Spearhead Group (MSG) does. Demonstrations were held in many cities including: Port Numbay/Jayapura, Biak, Fakfak, Gorontalo, Jakarta, Manokwari, Nabire, Sorong, Timika, Wamena and Yahukimo
West Papuans in the highland town of Wamena send a message appealing for help to the international community. May 31st 2016.
However the Indonesian government is becoming increasingly scared of increasing international support for the people of West Papua and in an attempt to hide the real situation in West Papua, the Indonesian police arrested hundreds of people simply for joining these peaceful demonstrations.
There are unconfirmed reports that 469 people were arrested in Port Numbay/Jayapura, 112 people arrested in Wamena, 7 people arrested in Manado, 6 people arrested in Gorontalo and 3 people arrested in Yahukimo.
Those who were arrested in Manado as well as 70 of those arrested in Wamena are still believed to be behind bars and are still at risk of being tortured like so many other West Papuan political prisoners.
West Papuan political prisoners being held in a prison in Manokwari held up placards calling for international help. 31st May 2016
Therefore on behalf of my people I appeal to all human rights groups, the Africa Caribbean Pacific Group of States and the world to please join us in calling for their immediate release.
It is not a crime to to peacefully call for international support for ones’ fundamental rights. We West Papuans risk our extinction as a people in the next few decades if this illegal occupation and terrible genocide continues.
Please help to support the people of West Papua in our peaceful struggle for self-determination. We West Papuans desperately want and desperately need to be free like other members of the Africa Caribbean Pacific Group of States.
—
Benny Wenda is West Papua’s independence leader, International Spokesman for the United Liberation Movement for West Papua (ULMWP) and founder of the Free West Papua Campaign. He has twice been nominated for the Nobel Peace Prize and lives in exile in the UK.
Follow Benny Wenda on Twitter: www.twitter.com/bennywenda

The Festival of Pacific Arts isn't just about showcasing our culture, but also shedding the light on issues affecting our brothers and sisters throughout the Pacific.

It's a perfect fit with the event called "the Olympics of culture". Julian Aguon said, "A lot of times there's an assumption maybe that human rights otherwise would not be relevant to a festival like this but actually in our opinion, human rights work is so important because it protects the space for culture and arts to flourish."
And today for the first time in any FestPac, an entire panel was dedicated in defense of human rights issues facing the people of Pacific. Aguon, an attorney, is behind the human rights law firm Blue Ocean Law and together with Westcare Pacific Islands hosted the Pacific Region Forum at the Latte of Freedom. Self-determination is just one human right issue affecting Guam...but we're not alone.
"In West Papua, there's a live self-determination struggle, but it also has other human rights issues and violations occurring there right now - there's actual genocide, there's mass extrajudicial killings, prolonged arbitrary detention torture, these are major human rights violations that Indonesia is committing upon the people of West Papua, who are incidentally fighting for their self-determination," he said.
The human rights issues facing the Pacific, however, goes even deeper as deep sea mining and extractive industries pose a threat to our culture. Joey Tau is from Papua New Guinea and is the media and campaigns officer from the Pacific Network On Globalisation.
"We have people who in our coastal communities who have for generations have lived and survived in our lovely big ocean and it's a new form of mining and the science behind it and the impacts are yet to be known, yet people have very little information about it, and it's more likely our coastal communities may be transformed or moved and displacement of people," they said.
And for Kathy Jetnil-Kijiner from the Marshall Islands, she says not just homes but entire cultures could be lost if climate change and the rising sea levels aren't addressed, as well. "I'm going to be speaking about climate justice and how climate justice is basically a human rights issue because these are people who we are talking about who could potentially lose their islands and lose thousands of years of culture and be displaced, so it's basically a human survival."
And while climate change puts the Marshall Islands and other low lying atolls at risk of "being swallowed by the ocean" very soon, she says this is a Pacific-wide issue.
"What I love about FestPac is it's an opportunity to share dances, share weaving, culture, but having this panel brings it to light these issues that are just as part of our Pacific communities, these are issues that are important to us to consider," she said.
After today's forum a human rights report will be launched.
——————————————————————
http://www.pina.com.fj/index.php?p=pacnews&m=read&o=464963167574f6d42243b98dfad36d
3) PNG Parliament debate border incursions by Indonesia

Border incursions and the Indonesian military buildup near the PNG-Indonesia border caused heated debate on the floor of Parliament Wednesday. Vanimo-Green Belden Namah described Defence Minister Fabian Pok as a person with an intelligence problem from the border because of the poor responses he provided to questions on national security. Northern Governor Gary Juffa said during Question Time that Indonesia has 4500 troops in West Papua and Wamena, moved there recently. He said the continuous military buildup and border incursions should worry the Papua New Guinea Government but they have not. He said there was a plan to build border guard posts along the 760km land border but nothing has been done. Dr Pok said the Government has a cordial relationship with Indonesia and Australia as its neighbours and that there is no need for panic. There is no threat, he added. He said the inclusions by Indonesian soldiers are provocative actions in pursuit of the suspected OPM rebels on the other side of the border. “We really do not have an issue and that there is no real threat on our border. I don’t really treat the movement of soldiers as a threat,” he said. Dr Pok said there are no border markers to indicate that the border and Indonesian soldiers have crossed over without knowing they had crossed in Papua New Guinea territory.   However, Namah, a former captain in the Papua New Guinea Defense Force, said in a supplementary question that the Minister seemed friendly with his rhetoric but while encouraging friendliness, the issue is serious because it threatened sovereignty and national security. “The important thing is to protect our sovereignty but your intelligence is a big problem,” he said.SOURCE: POST COURIER/PACNEWS