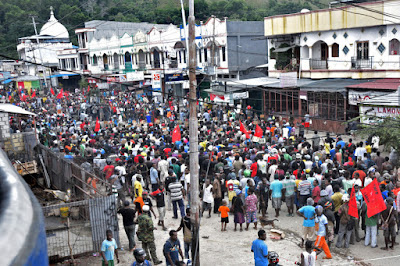 The KNPB has rejected a reconciliation plan prepared by Chief Security Minister Luhut Panjaitan, arguing that the Indonesian government is still pursuing repressive tactics toward pro-independence Papuans.
Among the detained protesters was Andreu Arino I Prats, a Spanish national and a student at Fisica University in Barcelona.
Papua Police spokesman Sr. Comr. Patrige Renwarin told Vivanews the police are questioning the Spanish national about his involvement with the KNPB.
According to the police, Prats entered Indonesia through the border city of Tarakan in North Kalimantan around two and a half months ago.
“He had just been here in Jayapura for two days and decided to join the protest,” Patrige said.
KNPB claimed more than 1,236 activists had been detained in West Papua and Papua for taking part in a number of rallies since June 10.
“Most of the detained activists had been released, but only after much questioning by the police. In Nabire, the police held them in custody for a whole day,” KNPB spokesman Bazoka Logo told local media Suara Papua.
—————————————————————-
http://www.radionz.co.nz/international/pacific-news/306559/msg-leaders-summit-scheduled-for-honiara
2) MSG leaders summit scheduled for Honiara
4:50 pm on 16 June 2016
Foreign Ministers and senior official of Melanesian Spearhead Group member states have held respective meetings this week in Lautoka, Fiji.
The meetings come ahead of a special MSG leaders summit which is understood to be scheduled for the Solomon islands capital, Honiara, on July 14.
The leaders' summit, which was originally scheduled for Port Vila in Vanuatu last month, has been postponed twice amid a busy schedule for the various leaders involved.
The summit is expected to formalise the appointment of the MSG's new director-general, Amena Yauvoli, and to discuss a bid by the United Liberation Movement for West Papua for full membership in the group.
The venue of the summit was changed after an aborted attempt at holding the summit in Port Moresby two weeks ago, ahead of which the leader of the Liberation Movement was not allowed to enter Papua New Guinea.
—————————————————
http://www.antaranews.com/en/news/105264/rights-violation-cases-in-papua-to-be-settled-definitively-minister-pandjaitan

Kamis, 16 Juni 2016 20:53 WIB | 697 Views
Jakarta (ANTARA News) - An Indonesian Coordinating Minister for Political, Security and Legal Affairs, Luhut Binsar Pandjaitan said here on Thursday that the government wishes to settle alleged cases of human rights violations in Papua definitively."I will meet all community elements, including religious figures, students, military and police officials and also non-governmental organizations. The government wishes to show to the world that we are serious and transparent in settling the cases. There is no engineering,"  he said at Sentani airport in Jayapura, Papua.He said the process has been going well. The integrated team that was set up in May 2016 to handle alleged cases of human rights violations in Papua and West Papua provinces has been assigned to collect data, information and analysis and it will submit its report to the President.Minister Luhut said in a written statement received here that day that a team had indeed been set up by the National Commission on Human Rights (Komnas HAM) in 2011 and this integrated team was set up by the government and was aimed at helping accelerate the settlement of the cases."The integrated team has defined the criteria for a human right violation. The criteria have been formulated transparently, and are measurable with impartiality. Based on the criteria, out of 22 reported cases, three could be categorized as human right violations, namely the Wasior, Wamena and Paniai cases," he said, adding that he had never intervened in the process of work of the team.Minister Luhut said whoever is declared guilty by the team will face judicial process. "Whoever he is, be they community members or law enforcement officials. In principle, whoever is declared guilty will be taken through a judicial process," he said.To assure that the process is transparent, he said he had invited New Zealands Ambassador to Indonesia, Trevor Matheson, Solomon Ambassador Salana Kalu, Fiji Ambassador S.T. Cavuilati and Papua New Guinea Ambassador Peter Ilau to Papua."Their presence here is to make the international community see what we have been doing. They are not a fact-finding team," he said.When asked about the rejection of the team by a Komnas HAM Commissioner, Minister Luhut said he had received confirmation from Komnas HAM Chairman Nur Kholis that this is a matter of a personal view and not the decision of Komnas HAM."When he was contacted by our staff, Pak (Mr) Nur Kholis said the decision of Komnas HAMs plenary meeting is to establish a working task force that will help Nur Khlis and Ibu (Mrs) Zandra Mambrasar to work for Papua together with the governments team," he said.With regards to reports about more than 1,000 people being arrested while conducting a demonstration to protest the governments team, Papua Regional Police Chief Paulus Waterpauw denied this, saying, "There has never been any arrest made. We only asked them to disperse."During his visit to the office of the Financial Service Authority (OJK) in Jayapura, Minister Luhut and the Head of the National Planning Board, Sofyan Djalil, had been briefed on OJK activities so far.OJK has emphasized on financial education and boosting economic development in Papua.On the occasion, Minister Luhut also expressed support for the development of entrepreneurship in the coffee, cocoa and palm oil plantation sectors.He advised OJK to set a target and find indigenous business cadres. Minister Luhut plans to visit Wamena, Manokwari and Merauke while in Papua.(Reporting by Syaiful Hakim/Uu.H-YH/INE/KR-BSR)

—————————————————————————-
http://en.tempo.co/read/news/2016/06/16/055780621/Artists-Launch-Protest-Against-Freeports-Sponsorship-in-Art-Jog
THURSDAY, 16 JUNE, 2016 | 22:40 WIB
4) Artists Launch Protest Against Freeport`s Sponsorship in Art Jog
TEMPO.CO, Yogyakarta - A group of young artists under the Alliance for Art Jog 2016 Boycott urged the Art Jog 2016 committee to return a sponsorship money worth Rp100 million (US$7,500) given by mining company PT Freeport Indonesia.
The demand was expressed in a rally launched in front of the Jogja National Museum, Yogyakarta, where the Art Jog 2016 was held on Thursday, June 16, 2016. As many as 30 people launched the protest that was tightly secured by police. Some of the protesters were from Papua who live in Yogyakarta.
The Art Jog 2016 was opened in May 27, 2016 and will be closed in June 27, 2016. Protest coordinator Nasir explained that the alliance was not against the art event.
“But we reject inhuman arts,” Nasir said.
According to Nasir, the event sponsorship was counterproductive with the Art Jog 2016 that features humanity-themed artworks. The alliance urged the committee to answer for their decision to involve Freeport and other environmentally-unfriendly companies as sponsors of the event. They also urged the committee to terminate contracts with Freeport and ban the company to be involved in art events in Indonesia.
Earlier, Art Jog director Heri Pemad insisted on keeping sponsorship fund from Freeport Indonesia to hold the largest art fair in Indonesia. Heri said that it would be tricky to break the contract with Freeport in the middle of the event.
"If we terminated the sponsorship [contract] with Freeport, we would have legal issues,” Heri added.
SHINTA MAHARANI
————————————————
http://tabloidjubi.com/eng/papua-provincial-government-set-up-286-fishing-vessels/
5) Papua Provincial Government Set up 286 Fishing Vessels
15 June 2016
Jayapura, Jubi – Papua Provincial Marine and Fisheries Office are praparing more than 286 fishing vessels of different gross tonnage.
“The vessels are in response to a proposal submitted by regencies, namely Jayapura Municipality, Jayapura, Biak, Yapen, Waropen, Timika and Merauke regencies,” said Fransiscus Xaverius Mote after the inauguration of Fishery Forum Board from Jayapura Municipality, Sarmi and Keerom regencies last week.
According to Mote, the office was only facilitating the assistance provided by the Central Government to the regional/municipal government through the proposal.
“There are such requirements, for example they must establish a cooperation which is consisting of 20 fishermen at least and they have the fisherman ID card,” he said.
Not only getting the vessel, the fishermen are also included in the training from the Indonesian Ministry of Marine and Fisheries for all positions in the boat, such as the captain, machine operators, catching crews and so on.
“They promised to manage the human resources to be trained. Why would we give those vessels without coaching or training the people,” Mote firmly said.
Director of Market Access and Promotion of the Ministry of Marine and Fisheries Ines Rahmania considered this assistance is the best attempt for Papua.
“Now along with the minister’s policy of moratorium, there are lots of fishes but less ices. So with this small assistance, we hope the fishermen do not need to wait very long for getting fishes,” she said. (Sindung Sukoco/rom)
————————————————————
http://tabloidjubi.com/eng/keeping-peace-despite-different-political-choices/
6) Keeping Peace Despite Different Political Choices
15 June 2016
Jayapura, Jubi – People should respect each other and keep the peace regardless of their political choices, said Director of Ilalang Papua La Hardin in response the recent emergence of a nationalist group to counter a rally by pro-independent KNPB (West Papua National Committee) .
Harding said a third party is needed to reconcile these two rival groups since it could be a challenge for peace. He also warned about groups with interests ahead of the 2017 Regional Head Elections.
“Because there are rumors among the people that both non-Papuans and coastal Papuan tribes will go together chasing the highlanders. It’s so vulnerable to conflict,” he told Jubi in Abepura, Jayapura City.
Earlier, before the series of rallies by nationalist group BARA NKRI and KNPB, there were some incidents of burning the morning star flag.
“We knew about the flag burning but who was behind it?” he said. For that reason he asked the government to open the space for dialogue for straining the problems become widespread.
A city resident told Jubi the government should take action to counteract the current situation.
“Government should prevent the acts that might affect the people in order to keep the peace in Papua. The government must also mediate the both sides immediately,” he said. (Abeth You/rom)
———————————————————-
Posted by AWPA Sydney News at 2:25 PM