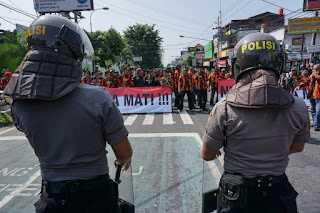 Dozens of Papuan students clashed with police during a rally in Yogyakarta on Friday (15/07) after the Melanesian Spearhead Group (MSG) rejected an application for full membership status by the United Liberation Movement for West Papua (ULMWP). (Antara Photo/Hendra Nurdiyansyah)

By : Alin Almanar & Donny Andhika Mononimbar | on 8:15 PM July 15, 2016
Jakarta. The Melanesian Spearhead Group has rejected an application for full membership status by the United Liberation Movement for West Papua, which Indonesia deems a separatist group, the Ministry of Foreign Affairs said.
The decision, made during an MSG special summit in Honiara in the Solomon Islands on Thursday (14/07), means the United Liberation Movement for West Papua (ULMWP) retains its observer status as an organization.
"There is no place for the ULMWP in the future of the MSG," Desra, director general for Asia Pacific and Africa at the Indonesian foreign ministry, said in a statement on Thursday (14/07). "The active participation and intensive lobbying by the Indonesian delegation, which also included representatives from five provinces, Maluku, North Maluku, East Nusa Tenggara, Papua and West Papua, has convinced MSG leaders not to accept the ULMWP's membership application."
The five Indonesian provinces are considered as Indonesia's Melanesian representatives in the MSG.
The ULMWP was granted observer status last year, following the collection of more than 150,000 signatures from West Papuans requesting full membership status in the intergovernmental organization, composed of the four Melanesian states of Fiji, Papua New Guinea, the Solomon Islands and Vanuatu, and the Kanak and Socialist National Liberation Front of New Caledonia.
Indonesia, which became an associate member of the MSG at last year's summit in Honiara and who is currently mulling full membership status, maintains that the ULMWP does not represent the people of West Papua.
The Solomon Islands and Vanuatu recently stated their support for full membership status for the ULMWP, while Fiji, Papua New Guinea and the Kanak and Socialist National Liberation Front of New Caledonia remained undecided.
"There was no refusal. This is only a delay," ULMWP leader Markus Haluk said in response to Thursday's decision.
"The reason for the postponement is the definition for new membership has yet to be properly arranged to ensure the acceptance of the ULMWP application," Markus told the Jakarta Globe on Friday. "Our application is delayed until the next special summit."
The summit, scheduled to take place in Port Vila, Vanuatu, in September, is expected to further discuss and settle the guidelines for MSG membership.
Protests
The MSG's decision not to upgrade the ULMWP's status has sparked a rally in some parts of Indonesia, such as in Yogyakarta.
Dozens of Papuan student held a rally at their dormitory despite not having a permit from the local police. The students are also trying to establish a ULMWP representative office in the city, which was rejected by security officials.
The rally ended with a clash between the Papuan students and police, resulting in Jalan Kusumanegara being closed to traffic for several hours. The situation was brought under control after four hours, when the road was reopened.
Papuan students in Makassar, South Sulawesi, also held a rally on Friday demanding that the MSG grants permanent membership to the ULMWP as a member state.
——————————————————————————

http://www.thejakartapost.com/news/2016/07/15/msg-rejects-separatist-bid.html
2) MSG rejects separatist bid
MSG rejects separatist bid Tama Salim The Jakarta Post
Jakarta | Fri, July 15 2016 | 09:23 am
Indonesia’s culture-based forays into the South Pacific and measured determination to extinguish the simmering heat of Papuan separatism has seemingly paid off.After years of building rapport, intensive lobbying and projecting itself as the benevolent giant in the region, Jakarta was afforded an opportunity to make its case for the inclusive development of its easternmost provinces and dispel any separatist sentiment.The Melanesian Spearhead Group (MSG), an important subregional grouping of Pacific island countries, has denied full membership to the United Liberation Movement for West Papua (ULMWP).“There is no place for the ULMWP in the future of the MSG,” said Desra Percaya, the Foreign Ministry’s director general of Asia-Pacific and African affairs, at the conclusion of the MSG Extraordinary Summit convened in Honiara, Solomon Islands, on Thursday.The MSG has agreed to hold further discussions at the extraordinary summit on MSG membership guidelines, which are expected to reach a conclusion in September at the next MSG conference in Port Vila, Vanuatu, he said.On the other side of the fence, members of the ULMWP are living on a prayer and insisting the MSG board has only deferred their bid for full membership, Australian broadcaster SBS reported.Desra insisted that the active participation of the Indonesian delegation, including representatives from five of the country’s Melanesian-rooted provinces (Maluku, North Maluku, East Nusa Tenggara, Papua and West Papua), had successfully swayed the opinions of MSG leaders in Honiara to reject the ULMWP’s bid for international recognition and support.Representation by Melanesians in Indonesia is an important aspect in forging ties with Pacific island countries, especially as the MSG has been used as a platform for Papuan separatist movements for decades.The MSG comprises Papua New Guinea, the Solomon Islands, Vanuatu, Fiji and New Caledonia. Indonesia obtained associate member status during the last MSG conference, which was held in the Solomon Islands in 2015.The ULMWP, which campaigns for Papuan independence, currently sits in the MSG as an observer.Separately, Coordinating Political, Legal and Security Affairs Minister Luhut Pandjaitan also confirmed the MSG’s decision, saying that it was proof that Indonesia was able to convince the forum not to support any bid from separatist groups.“Now Indonesia’s position in the MSG is extremely favorable,” Luhut told reporters outside his office in Jakarta.With the ULMWP out of the picture, he said that the door was open for the country to apply for full membership of the MSG very soon, pending the return of the Indonesian delegation from the Solomon Islands.“I can say this is the result of extraordinary teamwork done holistically,” the former Army general said.Luhut previously said that as a large country with significant influence in the Asia-Pacific region, Indonesia would reap more benefits if it became a full member of the MSG.Indonesia’s interests are underpinned by the demographic and geographic reality that 11 million people of Melanesian ancestry live in five of the archipelagic country’s eastern provinces.As a group aiming to achieve cultural solidarity and become a mouthpiece for the Melanesian people, Indonesia’s inclusion in the MSG is a government priority, as Jakarta looks to strengthen its cultural ties and ensure peace and stability in the region.“Indonesia is now positively considering a bid to become a full member of the organization,” Desra said.Earlier in April, Luhut visited a number of MSG member states to secure their support for Indonesia’s bid to fully join the MSG should the opportunity arise in the future.So far, Fiji has announced its support, while Papua New Guinea would assess Indonesia’s opportunity at the 21st MSG conference next year, which will be hosted by Port Moresby.On the other hand, Vanuatu is hostile toward Indonesia’s membership in the MSG and openly supports the separatist ULMWP.As the delegation leader for Indonesia, Desra underscored Indonesia’s commitment to push the MSG to become a progressive organization through concrete development cooperation and constructive dialogue.He also submitted a formal invitation from the government to have MSG member states attend the upcoming Bali Democracy Forum later this year.____________________________________________
To receive comprehensive and earlier access to The Jakarta Post print edition, please subscribe to our epaper through iOS' iTunes, Android's Google Play, Blackberry World or Microsoft's Windows Store. Subscription includes free daily editions of The Nation, The Star Malaysia, the Philippine Daily Inquirer and Asia News.

Local leaders have decried the results of selection for the Papuan People’s Representatives’ Council (DPRP), claiming the process was manipulated. Lembah Baliem, Wamena and Jayawijaya tribal chief Sadek Asso and Pegunungan Tengah Muslim Communication Forum head Ismail Asso on Thursday demanded the Home Ministry refuse to approve 14 newly selected DPRP members representing customary regions, pointing to strong indications of foul play.“Some of the figures announced by the selection committee were not even registered. How did the committee come up with the names? For example, one person was claimed to represent the customary region of La Pago, but he was never registered in the area. This deception contravenes the rights of the people of La Pago,” Sadek told the media in Jayapura on Thursday.He said he would not only voice protests in the media, but would take legal action. “We will report the alleged fraud to the Papua Police so they can conduct an inquiry and investigation,” he said.The DPRP is a form of legislative institution, particular to Papua, that consists of representatives of political parties and customary regions, as regulated by the 2011 Law on Papua’s special autonomy. The Papua DPRP currently has 56 members; the additional 14 members are required to complete the selection process in the council. The local administration has tasked a selection committee to organize the selection, involving all customary regions in Papua. Once all DPRP members are selected, the region will hold a selection process for another legislative council, the Papuan People’s Assembly (MRP), as mandated by the law. Ismail said some the names announced by the selection committee were already disqualified. “The most striking irregularity is that the 14 names in question have been stated as being disqualified by the selection committee in the regions. Furthermore, one name was passed although the person has not resided in Papua for the last 10 years,” he noted.Papuan Bylaw No. 6/2014 stipulates that appointed DPRP members must be native Papuans and Indonesian citizens who have been residing in Papua for at least 10 years consecutively. “Some of the names announced have not resided in Papua for 10 years consecutively,” Ismail claimed.Papua provincial first assistant secretary Doren Wakerkwa also firmly denounced the figures announced by the selection committee.“The names announced have not properly accommodated the indigenous regions, so a reselection must be carried out. The Papua provincial administration has received many reports regarding the recruitment conducted by the selection committee, rife with allegations of fraud,” he said.Earlier, the DPRP member selection committee announced 42 names of candidates selected from five customary regions.Of the 42 names, 14 were selected as definitive DPRP members.Three of the 14 were from the customary region of Me Pago, four were from La Pago, three from Saireri and two from both of Ha Anim and Mamta.The MRP has yet to initiate the selection of new MRP members given the ongoing DPRP selection process, in accordance with the Papua Special Autonomy Law.The DPRP selection will influence the number of MRP members as per the regulation stipulating that the number of MRP members should be equal to 75 percent of the number of DPRP members.
Posted by AWPA Sydney News at 2:40 PM