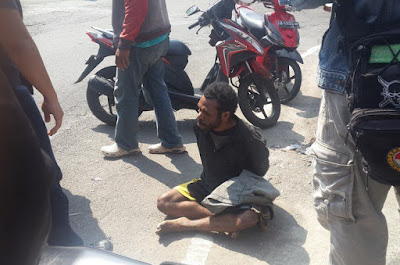 A Papuan student is arrested by police after attempting to enter a dormitory on Jl. Kusumanegara in Yogyakarta on Friday. (JP/Bambang Muryanto)

Police officers surrounded Papuan students in their dormitory in Yogyakarta to prevent them from attending an event organized by the People’s Union for West Papua Freedom (PRPPB).
Police officers secured the dormitory on Jl. Kusumanegara on Friday from morning to evening and arrested seven of the students.
The PRPPB event was in support of the United Liberation Movement for West Papua’s (ULMWP) bid to become a full member of the Melanesia Spearhead Group (MSG).
PRPPB spokesman Roy Karoba told The Jakarta Post that hundreds of students, who were kept in the dormitory since early Friday, had not eaten and an Indonesian Red Cross ambulance conveying food was prevented from entering the dormitory. “The ambulance was not allowed to enter [the dormitory]. It left after discussions with police officers,” Roy said.
Initially, the students sought to organize a meeting at Titik Nol (Zero Point) in the center of Yogyakarta City, but the police did not permit them to carry out their plans. They then decided to organize free speech events in the dormitory.
The police arrested at least seven students, seized a Morning Star Flag and a motorcycle. Police also fired warning shots during a clash between officers and students. Four of the students were arrested when they bought food at Giwangan market.
Tension at the dormitory increased when opposing activists from the Pancasila Youth (PP), the Communication Forum of Indonesian Veterans' Children (FKPPI) and a mass organization of Paksi Katon arrived at the location to support the police.
Yogyakarta Police’s intelligence department head Comr. Wahyu Dwi Nugroho confirmed that the police did not permit the event at Zero Point. “It is for the sake of security,” he said, declining to comment further.
Emanuel Gobay of the Yogyakarta Legal Aid Institution (LBH Yogyakarta) criticized the police for preventing the students from carrying out their demonstration, saying that it violated human rights principles. (bbn)
———————————————————————-
https://pasifik.news/indonesia-moves-to-isolate-west-papua-from-msg/
2) Indonesia Moves To Isolate West Papua From MSG
By Adam Boland -
July 16, 2016

Indonesia is confident the West Papua independence movement will never be granted full membership to the Melanesian Spearhead Group (MSG)
Melanesian leaders debated the issue on Thursday in Honiara but delayed making a decision until September so that more clarity could be provided about membership criteria.
Vanuatu Prime Minister Charlot Salwai says he “gravely regretted” the deferral and has vowed to keep fighting for the United Liberation Movement of West Papua (ULMWP).
But Indonesia’s Deputy Foreign Minister Desra Percaya believes the MSG will never give full membership to a “separatist movement”.
“The active participation and intensive lobbying by the Indonesian delegation, which also included representatives from five provinces, Maluku, North Maluku, East Nusa Tenggara, Papua and West Papua, has convinced MSG leaders not to accept the ULMWP’s membership application,” he says.
That “intensive lobbying” from Jakarta means Papua New Guinea and Fiji are likely to maintain their opposition to the ULMWP’s bid. Both countries say they respect the sovereignty of Indonesia.
Economic incentive
Mr Percaya says the Melanesian region stands to benefit economically from closer ties to Indonesia.
“The combined GDP of Southeast Asian countries is US$2.6 trillion with a population of approximately 622 million people,” he says. “Almost a quarter billion of this population live in Indonesia, including the 11-million strong Melanesian population.”
The ULMWP says it remains committed to securing full membership of the MSG and doesn’t believe the deferral means Indonesia has got its way.

Posted: Saturday, July 16, 2016 8:00 am
Compiled by Godwin Ligo | 0 comments
The United Liberation Movement for West Papua (ULMWP) was not admitted as full member of the Melanesian Spearhead Group (MSG) during the MSG Leaders’ Summit in Honiara Thursday this week.
The issue has been deferred by the MSG leaders to later this year.
This comes as great disappointment given expectations from throughout Melanesia including Vanuatu that ULMWP would be accepted as a full MSG member.
In a media statement released by the Vanuatu Prime Minister’s Office yesterday, it stated that the people of Vanuatu through their Prime Minister Charlot Salwai, lived up to the challenge as a leader of Melanesia for the fight to get the ULMWP in as
a full member of the MSG given the precedent of decisions by consensus, and not, by votes.
Vanuatu had conceded although it was clear that 3 of the 5 MSG leaders present had wanted the admission of ULMWP as a full member.
In the foregoing the fight is not over, Vanuatu is offering to host another round of dialogue in Port Vila before the end of September 2016 to deliberate on this matter.
The Government of the Prime Minister Charlot Salwai and the people of Vanuatu are adamant that Vanuatu can set itself up to meet another bout to discuss the inclusion of the ULMWP as a full member of the MSG.
Salwai took part in the special MSG Leaders’ Summit to defend the Council of Ministers Decision to endorse the application of Melanesian people of West Papua during the Honiara MSG Summit this week.
Following the decision of the Vanuatu Council of Ministers, Prime Minister of the Solomon Islands Manasseh Sogavare who is currently the Chairman of the MSG and Spokesperson of the FLNKS of New Caledonia, Victor Tutugoro indicated to support the decision of the Vanuatu Government.
It is not the first time that Vanuatu has pushed for Melanesian People to become member of the MSG.
During MSG Kanaky Leaders summit, Vanuatu took the lead to make West Papua become MSG full member but was further delayed due to differences with political grouping in West Papua. This led to Vanuatu hosting a conference in Port Vila where all leaders of different groupings in West Papua were present in Port Vila that led to the official establishment of the ULMWP agreement.
The date for another round of talks by the MSG Leaders on the issue of admission into the MSG put forward by Vanuatu, before the end of September this year, is yet to be announced.

“Decolonisation and independence of Melanesian countries close to my heart”
The following is what one of the founding fathers of the Melanesian Spear Head Group Sir Michael Somare of Papua New Guinea, said in relation to the West Papua issue as leaders meet in Honiara.

“Decolonisation and independence of Melanesian countries are processes of liberation close to my heart.

The Noumea Accord, for instance, symbolizes the pursuit of self-reliance and autonomy synonymous with the rights and freedoms available to all peoples of this century.

In practice the Accord provides for technical assistance, training programmes for the Kanaky people still residing under French sovereign rule.

Such arrangements already provide a legal and practical framework for the indigenous people of New Caledonia to fully exercise their right to self –determination, even as they long for independence.

Our decisions made at the MSG Leaders’ Summit over these next two days will embed values in future generations of Melanesian people who will regard our solidarity with admiration if we make the right decisions regarding decolonization and self-determination.

From today we will tell our own story, the story of our constitutional and universal right to exercise the freedoms given to us at independence in each of our countries. Today we can, by consensus, trigger the process for greater self-determination to be enjoyed by West Papuans.

As a Founding Father, I am encouraged by the progress made already on the key issue of West Papua's full membership to the Melanesian Spearhead Group.

I am inspired that the MSG senior officials, Ministers and Leaders will have maintained consensus despite some complex and sensitive diplomatic, economic, social, and political issues. Genuine and inclusive consultation amongst all MSG member states and one territory in considering the future path to decolonization and self-determination for West Papua is critical now more than ever before.

We are one people spread over many continents and oceans, separated by the sea and mountain ranges in diverse sovereign jurisdictions. Our ancestors roamed freely over our shared land and sea for centuries prior to colonial and Christian interventions. We must hold onto that spirit of a vast community that underpins our modern efforts within diplomacy and international cooperation and dialogue.

All MSG member states and one territory have experienced some level of political upheaval and civil conflict requiring decisive political and economic reform and declarations for peaceful transitions to occur. The export of mineral resources and agricultural commodities remains a key source of revenue for all states and one territory at the MSG. So it is essential that we endeavor to sustain political stability in order to buttress economic and environmental sustainability for the good of all Melanesian people. But our sub-region can only prosper when all political, economic, socio-cultural and environmental issues are considered in the same light according to the needs of all of our people.

Our growth potential relies on our diplomatic and official relationships, our ties and our linkages to the rest of the world. But as a group of ethnically linked people we have always relied on talking, exchange and cultural participation. We are Melanesians after all.  That is what makes us distinct. We bring those distinct features to every forum but this week at the Melanesian Spearhead Group Special Leaders’ Summit we have a unique opportunity yet again to decide on our own future with integrity as self-governing and independent members of a powerful sub-regional bloc.

More than ever that sub-region needs to include West Papua as an integral part and, as an equally participating member.

The MSG meeting ended yesterday with a deferment of the application by ULMWP to become a full member.

The application will be deliberated on later in September in Vanuatu.