Congratulations to the people of Vanuatu on their 36 years of Independence and on their continuous and courageous support for the people of West Papua in their self-determination struggle.

Citizens urged to celebrate the true meaning of independence 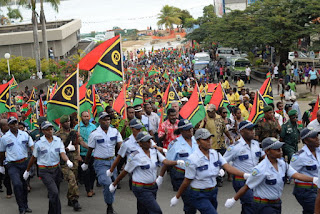 
Mayor Sumptoh conveyed that it is the intention of the committee which he lead to stop community events in the near future.
He stressed that citizens must learn to celebrate independence in a meaningful way and that is observing the day when Vanuatu was freed from colonial powers, being able to govern itself and breathing the sweet air of liberty.
Having a one day celebration is also an effective cost measure for the Port Vila Municipal Council, he added. Having said that, he applauded the government for its allocation towards making this year’s event a great one.
Port Vila, which is the host to the largest independence celebration, has been organizing victory parades since 1980.
The first victory parade was held in 1980 prior to July 30 from Fung Kuei to the old government building.
At that time it was led by the famous Tokelau String Band highlighting Port Vila street with the song ‘Forward we are marching on’.
Yesterday’s parade was led by the Vanuatu VMF/Police Force followed by Prime Minister (PM) Charlot Salwai, Minister of Justice and Community Services, Ronald Warsal, Mayor of Port Vila City Sumptoh, councilors, MPs, Senior government officers, men, women and youth.
Minister Warsal on the authorization of the minister responsible of independence celebration, Alfred Moah from Internal Affairs, made the official declaration of this year’s nation wide 36th independence anniversary.
While recalling the famous saying from late Father Walter Lini which states: ‘’Vanuatu is not truly independent until all Melanesia is free,” Minister Warsal’s message to everyone was to take the day to reflect on the struggle of the Melanesian sisters and brothers from New Caledonia (kanaky) and West Papua.
He advised everyone to celebrate in the christian way.
Yesterday’s guard of honor was performed by Prime Minister Salwai.
A minute silence was requested to think about the late leaders who fought hard for the country’s freedom.
—————————————————
Front pages of Vanuatu Daily Post showing support for West Papua . Bottom left 2006 . Right 2014 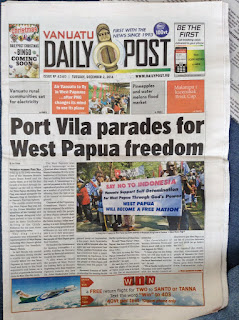 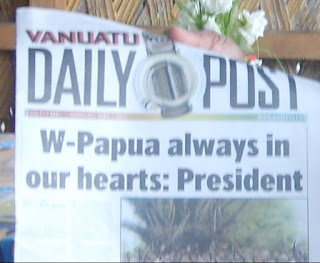