1) West Papua activists in Solomons ahead of MSG summit

1) West Papua activists in Solomons ahead of MSG summit

35 minutes ago
Members of the United Liberation Movement for West Papua have arrived in Solomon Islands ahead of the expected Melanesian Spearhead Group leaders' summit next week. 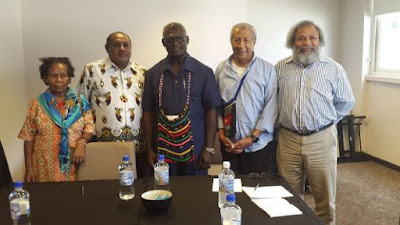 United Liberation Movement for West Papua members Mama Yosepha Alomang, Edison Waromi, Andy Ayamiseba and Jacob Rumbiak with the Solomon Islands prime minister Manasseh Sogavare (centre), Photo: MSG
The Solomon Star reports the West Papua campaigners arrived in Honiara on separate flights.
The MSG summit was originally scheduled for Port Vila in Vanuatu at the start of May, but moved to Port Moresby towards end of June.
Then it was postponed again because the leaders could not find time to meet during the Asia Caribbean Pacific meeting in Port Moresby.
It was understood the MSG Leaders' Summit will now be held back to back with the Pacific Islands Development Forum which is also scheduled to be held in Honiara next week.
The paper reports that peaceful demonstrations are expected during the MSG Leaders' Summit with West Papuan supporters denouncing human rights violations by by Indonesia in Papua.
——————————————————————————————
http://asiapacificreport.nz/2016/07/09/piango-welcomes-world-churches-call-for-west-papua-solidarity-visit/
2) PIANGO welcomes World Churches call for West Papua solidarity visit
By PMC Editor - 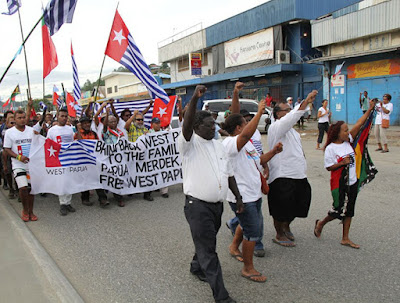 Church of Melanesia leaders at a West Papua solidarity march in Honiara, Solomon Islands, last year. Image: Wagingnonviolence.org
The Pacific Islands Association of NGOs (PIANGO) executive director, Emele Duituturaga, has welcomed a call made by the World Council of Churches (WCC) for a solidarity visit to West Papua by an international ecumenical delegation, reports PINA.
Duituturaga said the call made by the WCC for a solidarity visit to be organised as soon as possible, is timely given that the Melanesian Spearhead Group (MSG) will be meeting next week in Honiara, Solomon Islands:

“WCC HAS CALLED FOR THIS VISIT TO DEMONSTRATE THE ECUMENICAL MOVEMENT’S ACCOMPANIMENT OF THE CHURCHES IN THE REGION, TO HEAR THE VOICES OF THE VICTIMS OF VIOLENCE AND HUMAN RIGHTS VIOLATIONS, AND TO PURSUE THE PILGRIMAGE OF JUSTICE AND PEACE.
“WCC JOINS THE MANY VOICES FROM AROUND THE WORLD THAT HAVE BEEN CALLING FOR JUSTICE AND PEACE IN WEST PAPUA AND IT’S A CALL THAT SHOULD WEIGH HEAVILY ON THE HEARTS AND MINDS OF OUR LEADERS WHO WILL MEET IN HONIARA NEXT WEEK.”

Duituturaga said the Christian churches through WCC is a prophetic voice that must be given due consideration by the region’s leaders.
“WCC has called on its member churches to pray and act in support of the witness of the churches — especially the Evangelical Christian Church in Tanah Papua, and through the Communion of Churches in Indonesia (PGI), the Pacific Conference of Churches (PCC), and the Christian Conference of Asia (CCA) — for justice and peace in the region,” Duituturaga said.
“And rightfully so. The churches can no longer stand by and watch the genocide of indigenous Papuans. They have spoken about the need to protect human dignity.
Brutal rule“As a regional platform, PIANGO stands with WCC’s representative in the region, the Pacific Conference of Churches as they pray and act in support of Papuans suffering under the brutal rule of Indonesia.”
PIANGO is also collaborating with other regional NGOs to remind the MSG of the United Liberation Movement for West Papua’s application for full membership.
“ULMWP are Pacific Islanders, they are Melanesians and Indonesia’s continued denial of the genocide happening right at our doorstep of their people, our wantoks, warrants their full membership of the MSG.”
She said that with ULMWP’s full membership, Melanesian leaders can fully deliberate on the multifaceted nature of Indonesia’s brutality and its impact on Pacific people.
NZ Greens urge NZ PM to raise human rights concernsThe New Zealand Green Party says Prime Minister John Key must address human rights in West Papua when he meets with Indonesia’s Joko Widodo later this month, reports Radio NZ International.
Key intended to discuss trade and economic links, but a Greens MP, Catherine Delahunty, said there was no mention of discussions on the political situation in West Papua.
She said the complete absence of human rights from Key’s agenda was particularly damning given a schoolboy was shot by military police in West Papua only last week.
Posted by AWPA Sydney News at 5:52 PM