Media release -KNPB has called for a national action to be held over two day in West Papua.

The West Papua National Committee (KNPB) Centre has called for a national action to be held over two days, the 13th and July 14th in West Papua.

The action is to celebrate the meeting in Honiara in the Solomon Islands of the Melanesian Spearhead Group (MSG) leaders to consider the application of the United Liberation Movement for West Papua (ULMWP) for full membership at the MSG. The activities will take the form of a peaceful demonstration, prayer and feasting to show support for the ULMWP’s application.

In an opinion piece “Is MSG a strong or sick man of the Pacific?” the spokesperson from the Indonesian Embassy in Canberra wrote that the ULMWP  “was created to represent the voices of overseas Papuans, who may still have Indonesian citizenship and many who have renounced their citizenship. The Movement does not represent the almost four million residents”.

Joe Collins of AWPA said, "anybody concerned   about the grave human rights situation in West Papua would realise that Sade Bimantara from the Indonesian Embassy is wrong on many of his statements. One only has to be aware of the issue to know that the ULMWP represents the majority of West Papuans both inside and outside of the territory and not just those “voices of overseas Papuans” as he states.

In the large number of rallies that took place in the past months in West Papua many of the banners carried by the Papuans stated
“we support ULMWP to become the full member of MSG” and similar statements. Another point Mr Bimantara should ponder is why after 53 years of Indonesian administration West Papuans are still marching in the streets risking arrest and torture to bring to the worlds attention the injustices they suffer under Indonesian rule? A total failure on the part of Jakarta to win over the West Papuan people.

AWPA hopes that the upcoming celebrations are allowed to go ahead peacefully and the security forces will not interfere in any peaceful celebrations.  Since May of this year over 3000 Papuans have been arrested in peaceful rallies by the Indonesian security forces who seem to have great difficulty in grasping the principles laid down in the Universal Declaration of Human Rights which states, Everyone has the right to freedom of opinion and expression; this right includes freedom to hold opinions without interference and to seek, receive and impart information and ideas through any media and regardless of frontiers. (Article 19) and everyone has the right to freedom of peaceful assembly and association. (Article 20). 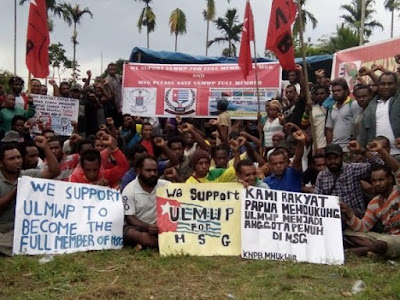 West Papuan people in Manokwari show their support for The ULMWP’s full membership of the Melanesian Spearhead Group (MSG)
at previous rally.
https://www.bennywenda.org/2016/indonesia-attempts-crush-mass-peaceful-rallies-across-west-papua/ 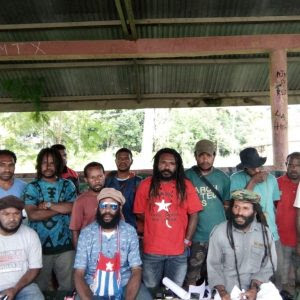 Bazooka Logo (center), Ones Suhun (right) with members of KNPB during a press conference in Waena, 07/11/2016. (Photo: Otopina surabut / SP)

JAYAPURA, SUARAPAPUA.com- West Papua National Committee (KNPB) Centre has issued a call for national action to all the people of West Papua. The action will be held over two days, the 13th and July 14th, 2016 in all the land of Papua.

Bazooka logo, a spokesman said the center of national KNPB, activities KNPB and the Papuan people will do is prayer and feast. In addition KNPB and citizens will also conduct a peaceful demonstration, worship, thanksgiving and the party of the people.

"Not that KNPB sure ULMWP will become a full member at MSG. KNPB not going to tell people or KNPB not promising (full membership ULMWP in MSG) to the people. No matter if ULMWP tomorrow will be accepted or not, but where the process of struggle, the liberation of West Papua is very important, "said bazookas told reporters in Waena on Monday (11/07/2016).

Today, lanjud bazookas, KNPB see the process of this struggle is more advanced and highly developed. It became a pride for the people of Papua. Indonesia can no longer claim that Papua is part of indonesi.

"But indoseia and Papua are two different peoples," said bazookas.

Bazooka also said, KNPB appealed to the people of Papua folk festival celebrated over two days on 13-14 coming in all the land of Papua.

"Because we were there in MSG as observer members and associate members Indonesia. Tomorrow (ULMWP) will receive a full member or not the most important thing is that the world in front of us sat together, standing as tall as a distinct nation. So on 13-14 July, we are going to party, "said bazookas.

Meanwhile, suhun Ones, general secretary of the central KNPB said, should have the same status in the MSG ULMWP with FLNKS status representing the people Kanaky at MSG.

"Tomorrow the people of Papua to be mediated KNPB do ULMWP support for the party. Regardless of the outcome later political decisions in the hands of the leadership of MSG in the communique decisions together, whether permanent or observer status be changed to an associate member or a full member it is a management decision MSG, "added Suhun.

To note, the center has seruhkan KNPB peaceful protest and folk festival which will be held on 13-14 July next in all the land of Papua, from Sorong to Samarai.