2 DAYS, 257 KNPB TIMIKA MEMBER ARRESTED BY POLICE AND ARMY
KNPB Timika News___Selama two consecutive days Police and Army captures Hundreds of activists of the National Committee of West Papua (KNPB) Region and Parliament Mimika DPRD [PRDM], a total of 257 Members, and including the Rev. Daniel Bagau, S.Th. As of July 12 to 13, 2016.
"The peaceful protest, in order to support ULMWP to become a Full Member at MSG" 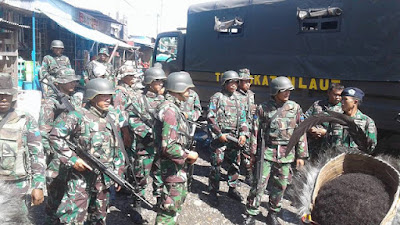 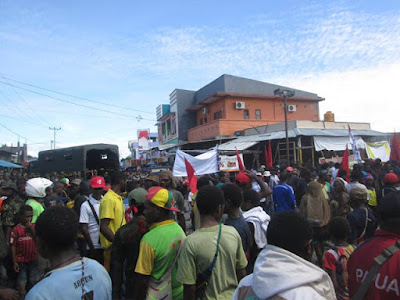 "And all the people of the nation of Papua firmly reject Indonesia in the forum accepted the MSG and MSG Leaders We ask that Indonesia immediately kicked out of MSG".

Interest peaceful protest, to support the meeting which will be done in the Solomon Island capital Honiara on 14-16 July 2016 a few days in the Soloman Island.

Then, the second point Roundabout Timika Indah, as many as 54 activists were arrested by the police and army, when the police arrested indiscriminately fired shots towards the past, and police and soldiers arrested Pastor Daniel Bagau, and dozens of other members.

Furthermore, the third point, the fork Markets SP II, hundreds of future action towards the KNPB member 32 Samai near side Koramil Benlap Commission Office SP III, as many as 124 members of KNPB, arrested under the Police and Army to 32 Brimob headquarters.

The arrest at the time, including Mr. YANTO AWERKYON as Chairman of the KNPB Region 1 Timika belt and carried a dead rubber wear, and Mr. SEM Ukago as General Secretary KNPB Timika region.

Dozens of members of KNPB can be arrested at Jalan SP 2, after crossing the bridge once the welcome from the direction kuala WPB approximately 05:00 on Tuesday July 12, 2016 yesterday.

,
We are in the advocacy!