2) Protester crashes Dutch royal visit
3) Papuans mull over lost local cuisines on council’s birthday
——————————————————————
Article included photos/maps
https://news.mongabay.com/2016/11/complaint-against-a-palm-oil-company-in-papua-held-in-limbo-by-rspo/
1) Complaint against a palm oil company in Papua held in limbo by RSPO
2 November 2016 / Alice Cuddy
The grievance was filed against PT Nabire Baru, an arm of Goodhope Asia that is accused of a raft of violations in Indonesia’s easternmost region. The company denies the allegations.
A complaint lodged earlier this year about alleged abuses by a palm oil company in Indonesian Papua has raised questions over the credibility of the industry’s largest certification scheme in investigating member violations.

n April, indigenous rights NGO Pusaka wrote to the Roundtable on Sustainable Palm Oil (RSPO) with detailed allegations that PT Nabire Baru — a subsidiary of Goodhope Asia, which is owned by Sri Lankan palm oil giant Carson Cumberbatch — had violated “both legal
regulations and the customary law” of the Yerisiam Gua people, as well as the RSPO’s own principles and criteria, which ban unsustainable practices like the conversion of virgin rainforests and land grabbing that aren’t necessarily illegal in countries where palm oil is produced.
Central to the complaint were claims that Nabire Baru took communal land belonging to the indigenous group in Papua’s Nabire district without a collective decisionmaking process.
“The company only ever met and managed to gain the support of a small group of community members, causing disharmony to emerge within the Yerisiam indigenous community,” the letter states.
Nabire Baru was also accused of using guards from the police special forces to intimidate the local community as it expanded its operations, destroying “ecologically important” and “sacred” sago forestland relied on by the Yerisiam people for food and trade.
“The sago groves in question have existed naturally since ancient times, and are sacred sago groves which have provided food for the people of Sima village from generation to generation up to the present day,” said a separate letter sent on behalf of the Yerisiam indigenous community. 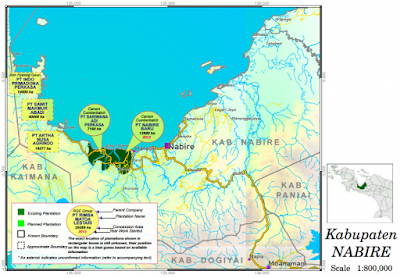