2) Indonesia arrests over 100 Papuans in Sorong 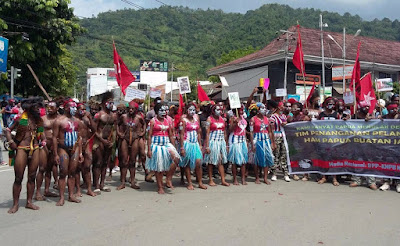 Papuans hold a self-determination rally on Wednesday in Sentani, Papua, demanding that the government conducts an independence referendum for the eastern province. (KNPB/Exclusive)
Sorong Police in West Papua province confirmed they ordered a group of people praying on SPG Sorong field on Saturday to disperse and accused the congregation of separatism because the police claim the congregation yelled, demanding independence.
The event was organized by West Papua National Committee (KNPB) to celebrate their eighth anniversary by organizing an event to pray together.
KNPB said the police took all 106 people at the event to Sorong Police office for questioning. Later, they released 99 people and detained the other seven: Agustinus Kossay, Arnoldus Kocu, Jack Badii, Kantius Heselo, Mika Giban, Oskar Solossa and Yance Assem.
KNPB said the police accused the seven of treason and provocation.
Sorong Police chief Adj. Sr. Comr. Edfrie Maith said they only detained seven of them for 24 hours, in compliance with the procedure.
“It’s our duty to question them within 24 hours. After we questioned them, we released them,” Edfrie said.
Veronica Koman, a public interest lawyer with Papua Itu Kita, who often helped KNPB with legal advocacy, said the seven were released on Sunday, but they had to report to the police daily.
Edfrie said the police ordered the event to disperse because in the event notification letter from KNPB, the organization used a symbol that is not an Indonesian symbol. “Of course we didn’t let them organize it, they refuse to acknowledge the Republic of Indonesia,” he said on Sunday.
Veronica said KNPB produced a notification letter about the event using the KNPB logo, which was the usual procedure for any other organization. “The stamp resembles the Morning Star flag, but I think that’s beside the point. This is an attempt to muffle freedom of expression in Papua,” she said.
Gema Demokrasi, a Jakarta-based network of 75 civil society organizations, criticized Edfrie’s statement in which he made a deal with Sorong journalists not to publish the story. “Sorong journalists and I have agreed not to make news of the event. They intentionally made such an event to get some outside exposure to be acknowledged,” Edfrie said as quoted in tabloidjubi.com.
Gema Demokrasi said Edfrie's attempt was a violation of the 1945 Constitution on freedom of expression.
KNPB is an organization promoting self-determination for Papuan people.
—————————————————
http://www.radionz.co.nz/international/pacific-news/318572/indonesia-arrests-over-100-papuans-in-sorong

2) Indonesia arrests over 100 Papuans in Sorong

12:27 pm today
More than 100 indigenous activists were arrested by Indonesian police at the weekend in the West Papua city of Sorong.
The police took in 106 activists from the West Papua National Committee, or KNPB, for their involvement in an inauguration of its local governing body last week.
The KNPB is a pro-independence West Papuan political organisation with a wide following throughout Indonesia’s Papua region.
The inauguration of the KNPB's Sorong governing structure included a mass worship celebration and drew Papuans from areas such as Tambrau, Ayamaru and South Sorong.
Tabloid Jubi quotes a KNPB Sorong spokesman Aud Augustine as saying Indonesian police, combined with Indonesian military, forcibly disbanded their peaceful event.
Mr Augustine said that in making the arrests, police breached the Papuans' basic democratic rights.
The KNPB is one of the organisations represented in the United Liberation Movement for West Papua which has been lobbying for greater international representation for Papuans since last year.
Widespread demonstrations across Papuan cities in support of the Liberation Movement during May and June resulted in mass arrests in some cases.
Indonesian police have warned they will not tolerate activities that promote separatism.
—————————————————————————————————