Australia West Papua Association (Sydney)
West Papuan National Flag Day.  1st December
Its now fifty 55 years since the Morning Star flag  was flown officially for the first time on the 1st of December 1961. The West Papuan people continue to  raise their flag as an act of celebration  but also of protest against the injustices they suffer under Indonesian rule. They can face up to 15 years jail for doing so.


Jakarta is becoming increasingly  concerned at the internationalisation of the issue of West Papua which is why the security forces  have been cracking down on peacefully rallies organised by  civil society organisations in West Papua. They most recent crackdown  was on the KNPB as they celebrated their  eighth anniversary. 106 people were arrested in Sorong.  However,  thousands of West Papuans have been arrested  at rallies throughout the past year in West Papua. Although the majority of activists were  eventually released, during the arrests activists are regularly beaten and in some cases face torture. 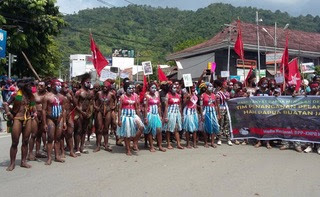 However, it is also encouraging to see the huge groundswell of support around the world and in particular in our region on the issue of West Papua.
This support includes Civil Society Organisations (CSO), churches and governments. Seven  Pacific leaders raised the issue of West Papua at the  71st Session of the United Nations General Assembly in New York  in September 2016 . The Marshall Islands, Nauru, Palau, Solomon Islands, Tonga, Tuvalu and Vanuatu all raised concerns about the human rights situation in West Papua.
From the Solomon Islands Prime Minister H.E. Mr. Manasseh Sogavare statement in relation to West Papua.
“Solomon Islands is gravely concerned about the human rights violations against Melanesians in West Papua. Human rights violations in West Papua and the pursuit for self-determination of West Papua are two sides of the same coin. Many reports on human rights violations in West Papua emphasize the inherent corroboration between the right to self-determination that results in direct violations of human rights by Indonesia in its attempts to smother any form of opposition.
Recently a new “Pacific Coalition on West Papua” was formed.  The initial membership comprises the Solomon Islands Government, Vanuatu Government, Front de Liberation Nationale Kanak et Socialiste (FLNKS) and the United Liberation Movement of West Papua and the Pacific Islands Alliance of Non-Governmental Organisations (PIANGO). Two new members are the governments of Tuvalu and the Republic of Nauru.. The other two parties who indicated support for the initiative when it was introduced in Honiara at the margin of the 4th Pacific Islands Development Summit are the Kingdom of Tonga and the Republic of Marshall Islands.
On West Papua’s quest for membership of regional bodies and independence from Indonesia – Dame Meg Taylor (Pif secretary General) had one advice for colonial powers – ‘respect the aspirations for greater autonomy by colonised people.’  “The aspirations for independence should be shared by at least the majority of the population….and does not give rise to civil conflict, said the Forum Secretary General.

Jakarta’s concern at this growing support goes so far as urging Australia to pressure the Pacific countries to stop supporting West Papua. Indonesia's Defence Minister has urged Australia to rebuke Pacific Island states who raise issues relating to West Papua in global forums Ryamizard Ryacudu met with Australian government representatives including Foreign Minister Julie Bishop in a meeting in Bali where the two countries reaffirmed security ties. He pressed Australia to pass a message to Solomon Islands that it should refrain from interfering in the internal affairs of Indonesia, including the issue of West Papua. http://www.radionz.co.nz/international/pacific-news/316920/jakarta-urges-canberra-to-deliver-regional-warning-on-papua
The Australian Government should realise the issue of West Papua is not going away and should be doing all it can to raise concern about the human rights situation with the Indonesian Government and not be training the Indonesian military. In an article in the Antara News (27 October 2016 ) Indonesia’s Defense Minister said that Indonesia and Australia would discuss efforts to deepen their military relations at the 2+2 meeting scheduled to be held in Bali on Friday.  "We will discuss how to deal with the South China Sea issue as well as the threats of terrorism which are our common enemy. The talks will be aimed at deepening our relations," he stated after a press conference on "Two Years of Concrete Work by Jokowi-JK," at Bina Graha, the state secretariat, and  "I will never meddle in the affairs of other countries and similarly other countries also must not meddle into our affairs,” he stressed (West Papua?).
1st December 2015
In Jakarta last year at least 306 Papuan students were arrested by the Police on the 1st December 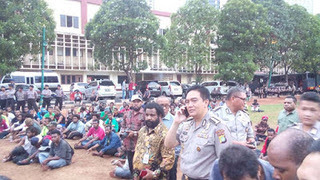 
Despite the rally being legitimate and peaceful the police claimed it was illegal and that they had acted to maintain public order. Hundreds of AMP (Papua Students Alliance) members and approximately 400 police were involved in the clashes after the police tried to disperse the crowd using tear gas.


The Alliance of Independent Journalists (AJI)  condemned the police for attacking and threatening severa journalists covering the rally. http://www.thejakartapost.com/news/2015/12/01/aji-condemns-vicious-police-assault-reporters-covering-rall.html

Hopefully this year the security forces will allow the West Papuan people to celebrate their National Flag day peacefully and not resort to their usual heavy handed approach to any peaceful rallies called by the West Papuan people.
As individuals we can also contribute to raising awareness about West Papua on the 1stDecember.
By wearing a West Papuan t-shirt or badge or writing articles/opinion pieces/letters for your church/trade union newsletter, to the media.  All these simple actions will help raise the issue of West Papuan in the minds of the Australian public.
In Sydney supporters will celebrate the day in a solidarity march from the Opera House to Town Hall Square on the 4 December.
Info at
https://allevents.in/sydney/flag-raising-for-west-papua-sydney-march/359411431060896
https://video214.com/play/W7qhq1axtZo28s6mFXVfXg/s/dark