2) Island focus: Papua modifies ‘noken’ voting system
——-
1) MSG secretariat pencils date for leaders summit
11:51 am on 18 November 2016
The director-general of the Melanesian Spearhead Group says the secretariat has a proposed date for a leaders summit to discuss West Papuan membership. 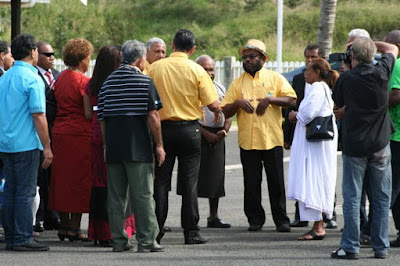 MSG members are yet to settle on a date for their summit. Photo: RNZI / Johnny Blades
Amena Yauvoli told Vanuatu media that 20 December is the proposed date for the summit in Port Vila, with the secretariat awaiting a consensus on the matter among members.
The meeting was postponed for a second time in early October, and the secretariat had since been unable to pin down a date that works for all leaders from the five full MSG members.
The five are Papua New Guinea, Fiji, Vanuatu, Solomon Islands and New Caledonia's FLNKS Kanaks Movement.
They are due to deliberate on an application for full membership by the United Liberation Movement for West Papua which is opposed by Indonesia.
The Liberation Movement was granted observer status in the MSG in 2015, while Indonesia is an associate member.
In a sign of the sensitivity around the issue within the MSG, leaders have this year deferred a number of summits where West Papuan membership was a priority item.
Solomon Islands prime minister Manasseh Sogavare, who is the current MSG chairman, has been instrumental in advancing the West papuan membership issue. Photo: RNZI
The annual MSG leaders summit was held in Honiara in July after several late changes of venue and date.
In Honiara, leaders deferred their decision on the Liberation Movement's application for full membership, saying adequate membership criteria had to be developed first.
Vanuatu's prime minister Charlot Salwai subsequently explained that since last year MSG membership criteria had been developed which did not reflect the group's founding principles.
Vanuatu, Solomon Islands and the FLNKS are understood to support the Liberation Movement for full membership, with PNG and Fiji inclining towards Jakarta’s stand on the matter.
PNG Foreign Minister Rimbink Pato (right) talking to his Indonesian counterpart Retno Marsudi. Photo: Supplied
Amid frustrations with the availability of all members, reports have surfaced that the MSG could make a decision on Papuan membership if three of the five full members were present.
Meanwhile, according to Mr Yauvoli, as well as the membership matter, MSG leaders are required to meet in order to approve the secretariat's 2017 budget.
The secretariat has struggled with a lack of resourcing in recent years, with some full members not paying their full fee commitments.
——————————————————————
http://www.thejakartapost.com/news/2016/11/18/island-focus-papua-modifies-noken-voting-system.html
2) Island focus: Papua modifies ‘noken’ voting system
Jayapura | Fri, November 18 2016 | 08:55 am
The Papua General Elections Commission (KPU) will retain the noken system in the upcoming regional elections in the province’s six regencies and cities in February.The six regencies are Puncak Jaya, Tolikara, Intan Jaya, Nduga, Dogiya and Lanny Jaya. The system will be used in all districts except where the capitals of respective regencies are located.However, the Papua KPU has adjusted the procedure in the noken system to comply with regulations, Papua KPU commissioner Beatrix Wanane said on Thursday.Previously, in the noken system, individual voters did not go to polling stations to vote. Instead, tribal leaders visited poll stations and lodged one vote to represent every member of his respective community. Ballots were placed in a noken, a traditional Papuan woven bag. Before the tribal leader voted, the respective community held a meeting to reach a consensus on which candidate to vote for.“We will issue a module as a guideline. We need to comply with election regulations that every eligible person who wants to vote must come himself or herself to the polling station,” Beatrix said.She denied that the module would affect local values in the system.“The module does not eliminate the noken system. People can discuss which candidate to vote for beforehand or entrust the choice to the group leader or tribal chief, but those wanting to exercise their voting rights are obliged to come to the polling station to return the C-7 [voting registration] form to officers at the station,” she said.Beatrix said the old system was prone to manipulation because the number of voters represented by the community leaders could not be verified.The module will be issued in December this year and the campaign period will begin in January.The communities in Papua’s mountainous regions have applied the noken system since 1971. “The noken system is part of our national cultural wealth. However, it should comply with administrative requirements,” added Beatrix.