1) Pacific churches up their call for human rights justice

2) Military officials from Indonesia and Papua New Guinea have resolved outstanding cases relating to territorial mistakes around the common border.
3) Pacific civil society leaders urged to be involved in self-determination referendums in New Caledonia and Bougainville
————————————————————-
http://www.radionz.co.nz/international/programmes/datelinepacific/audio/201823972/pacific-churches-up-their-call-for-human-rights-justice
1) Pacific churches up their call for human rights justice
From Dateline Pacific, 6:04 am on 16 November 2016
Church groups around the region are calling for justice on long-standing issues undermining the rights of the region's people.
At a recent gathering in Auckland, the Pacific Conference of Churches' general secretary discussed issues such as West Papua, climate change, the legacy of nuclear testing and the militarisation of the Pacific.
Indira Stewart was there. 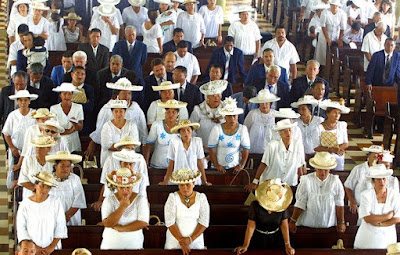 French Polynesia's Protestant church tiij France to the International Criminal Court over the legacy of the French nuclear weapons tests. Photo: AFP/ Valerie Macon
TRANSCRIPT
In his presentation, general secretary Francois Pihaatae pointed to the Protestant church in French Polynesia and their decision to take France to the International Criminal Court over the impact of decades of nuclear testing. Mr Pihaatae added that church leaders played a key role in ending French nuclear testing in the territory in 1996. He says this shows that the united voice of church groups should not be underestimated.

"When the church speaks it's not only the church, it's also the people. Because most of the time we have the people with us. We cannot ignore also the unity of the people at the grassroot level because they hold the power to speak."

"There's only one reason why I think we've had seven pacific nations speak out strongly in the United Nations General Assembly, and that's because the pressure's coming from the grassroots. And a big part of that grassroots pressure in the pacific is coming from the churches."

Mr Pihaatae says more church groups are uniting in pressuring political leaders to speak out about West Papua. For the first time since the body was established 20 years ago, the Papua New Guinea Council of Churches also joined the call to support West Papua's bid for decolonisation. He says council members want Indonesia's government to end what he calls the genocide of West Papuans.

"A call to Indonesia to stop killing these people. That's the only first priority for us to call Indonesia Military or police or whatever means they are using to kill the people. They are not animals, they are human beings like themselves - Indonesians. And the second thing we are trying to do is to take the issue of West Papua on the decolonisation list. You know, for them to enjoy freedom like other Pacific Islands who are independent. Free."

Mr Pihaatae says the council includes West Papua churches and wants them to know that they are not alone.

"We have right now, two member churches in West Papua and we will welcome another two next year. So that means that through our actions, we are trying to bring back our West Papua people to home."

Other issues included the impact of resource extraction on the environment, the non-communicable diseases epidemic, the church's role in combating violence against women, as raised by one member of the Quaker church in a Q-and-A session.

"I was in Tonga last year when the Tongan government was ready to ratify CEDAW, and it was the churches mostly who led the backlash against that which stopped that convention being ratified. I acknowledge it's not an indigenous way of approaching things. But it was a backwards step for Tongan women."

Mr Pihaatae says the church is actively seeking the participation of men in efforts to combating violence against women.

"Dealing the issue of women with women, it doesn't work. Then we started that new approach. We call the men in and create a workshop for men and it works well."

Mr Pihaatae says the council will continue to bring the people of the Pacific together to fight for justice and peace to protect their collective future.
——————————-
http://www.radionz.co.nz/international/pacific-news/318271/png-and-indonesia-address-military-border-mistakes
2) Military officials from Indonesia and Papua New Guinea have resolved outstanding cases relating to territorial mistakes around the common border.
2:10 pm today
Indonesia’s navy mistakenly built a jetty in PNG territory in 2010, while PNGDF soldiers mistakenly removed an Indonesian flag in Indonesian territory in August 2015. 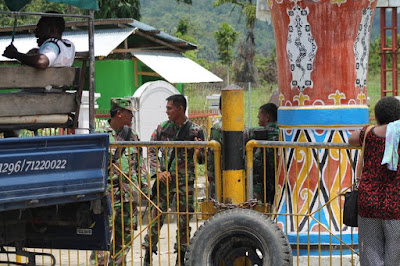 Indonesian soldiers man the border with Papua New Guinea at Wutung. Photo: RNZI / Johnny Blades
The newspaper, The National, reports the mistakes along the border were addressed during a sub-committee on security meeting in Port Moresby.
PNGDF officer Col Eddie Yodu said they had identified that PNGDF soldiers mistakenly built an international border marker away from its original 141st meridian position at the Torassi River.
The original marker had reportedly been washed away by flooding in 2011.
PNG soldiers built a replacement marker without consulting the PNG and Indonesian joint technical sub-committee on border survey and demarcation.
The sub-committee has confirmed a new marker has to be built where the original marker had been, under its supervision.
Col Yodu said the Indonesians had built a jetty about 22 metres into PNG territory in Western province.
The jetty was built for Indonesian marines to access their naval post, however the naval post was in Indonesia's Papua province.
The Indonesians have been advised to remove the jetty and build it on their side.
Col Yodu said this week that the cases had been resolved.
He added that PNG was to send a diplomatic apology for its soldiers removing the Indonesian flag from Yakyu village which is officially two kilometres inside Inodnesian territory.
PNGDF personnel made an error in claiming the village is a PNG village.
Col Yodu said that although the villagers were Papua New Guineans, the Indonesian government was providing them with health and education services.
———————————————————-
http://www.pina.com.fj/index.php?p=pacnews&m=read&o=1556423801582d282918a8e36d9491
3) Pacific civil society leaders urged to be involved in self-determination referendums in New Caledonia and Bougainville
The Secretary General of the Pacific Islands Forum Secretariat (PIFS) has exhorted civil society leaders and political groups meeting in Suva this week to ‘ensure colonising powers adhere to agreements’ they have committed to, on self-determination. Dame Meg Taylor was responding to questions on the role of the Pacific Islands Forum in the lead up to two upcoming national referendums on self-determination planned for New Caledonia in 2018 and Bougainville in 2019. “The Pacific Islands Forum does not have a role in any pre-referendum vote. In Bougainville, the United Nations in involved but if we are invited to send an observer mission, then we will do so. Dame Meg said she would be visiting Bougainville next year. She also urged civil society groups to advocate and create awareness on the people’s rights and responsibilities on self- determination. “I can only advise you to do what you do best – advocacy and creating awareness in your communities. Your role is to ensure that these agreements are adhered to by the colonising powers. You must also ensure the registered rolls for the referendums are consistent with the agreement. Her comments come a day after the pro-independence political group in New Caledonia, the FLNKS raised serious concerns about the missing names of indigenous voters from the 2018 referendum list. The FLNKS estimates that between 20,000-25,000 names are not in the French Government prepared voting list. Theresa Jantong from Bougainville said her people are now preparing for the referendum to become independent from Papua New Guinea. “The national government has been supporting Bougainville, building our capacity through education, providing us with our budget and building our infrastructure. There have been consultations between the national government and the Bougainville Autonomous Government to prepare us for the referendum, said Jantong. Bougainville is an autonomous part of PNG, and fought a decade-long civil war with the national government that ended in 1999. The region must hold an independence vote by 2020 under the terms of the Bougainville Peace Agreement, but the new target date for the referendum is now set for June 15, 2019. Commenting on the planned independence votes in the two Melanesian countries, Solomon Islands political adviser on West Papuan issues, Fei Tevi said these two areas are potential ‘hotspots’ for the Pacific region in the coming two years. “Self-determination is not a new issue. It has been the agenda of political leaders since the 1980’s and yet the region, especially civil society appear least prepared to deal with the two national referendums for self-determination in New Caledonia and Bougainville. Civil societies need to go out here and garner support to ensure the people are informed about this crucial vote. Tevi said the other potential hotspot will be West Papua and how civil societies can support the peoples of West Papua in their struggle for independence.SOURCE: PACNEWS

Posted by AWPA Sydney News at 1:01 AM