2) Climate change link to West Papua resource exploitation probed
3) Jakarta diplomacy odd and backwards, ULMWP
———————————————-
http://www.radionz.co.nz/international/pacific-news/317189/west-papua-resources-fray-discussed-alongside-climate
1) West Papua resources fray discussed alongside climate
10:11 am on 3 November 2016
A conference getting underway in Sydney today looks to address two major areas of concern to people in the Pacific region in the same sitting.
‘At the Intersection: Pacific Climate Change and Resource Exploitation in West Papua' runs for two days, hosted by Western Sydney University and the University of Sydney's West Papua Project. 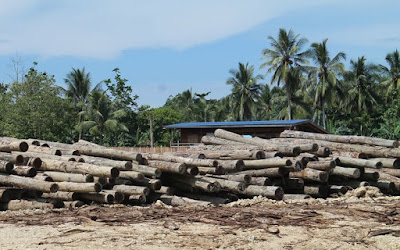 Deforestation is rife across New Guinea. Photo: RNZI / Johnny Blades
The keynote speaker is Vanuatu's Minister of Lands and Natural Resources, Ralph Regenvanu. Others attending include climate change scientists and West Papuan analysts.
The conference has been organised by Dr Cammi Webb-Gannon from Western Sydney University who said climate change and pernicious resource extraction in West Papua had a deep connection.
She said there was a need to find common strands of the two problems, and how it might it be useful to address them together.
"The Indonesian colonisation of West Papua is what has led to this gross resource exploitation, and the flow-on effects of human rights violations and environmental destruction in West Papua. So the two are very related," she explained.
"They've never been discussed in tandem, but that's the point of this conference, to do so."
Dr Webb-Gannon said there were various critical issues that required attention.
She noted how the impacts of climate change throughout the Pacific Islands region highlight the importance of preserving West Papua's rainforests from rampant logging and forest clearance.
"We want to question in this conference whether if we can halt or even stop some of the resource exploitation - whether that's mining at Freeeport, gas mining along the coast of West Papua or even looking at reducing the land clearing in Merauke - then maybe this can help slow down Pacific climate change which is also quite alarming."
The conference will utilise Open Space Technology to elicit creative strategies and policy advice from expert participants.
———————————————————-
http://www.radionz.co.nz/international/programmes/datelinepacific/audio/201822386/climate-change-link-to-west-papua-resource-exploitation-probed
2) Climate change link to West Papua resource exploitation probed
From Dateline Pacific, 4:04 pm on 3 November 2016

A conference underway in Sydney today is seeking common solutions to two major areas of concern to people in the Pacific region.
'At the Intersection: Pacific Climate Change and Resource Exploitation in West Papua' runs for two days, hosted by Western Sydney University and the University of Sydney's West Papua Project.
The keynote speaker is Vanuatu's Minister of Lands and Natural Resources, Ralph Regenvanu. Others attending include climate change scientists and West Papuan analysts.
The organiser, Dr Cammi Webb-Gannon from Western Sydney University says climate change and pernicious resource extraction in West Papua have a deep connection.

CAMMI WEBB-GANNON: The island of New Guinea is home to the second largest swathe of pristine rainforest in the world outside of the Amazon, and the logging that's happening there is taking place at a breakneck speed, and we want to question at this conference whether if we can halt or even stop some of the resource exploitation - whether that's mining at Freeport, gas mining along the coast of West Papua or even looking at reducing the land clearing of MIFEE, the Merauke Integrated Food and Energy Estate - then maybe this can help slow down Pacific climate change which is also quite alarming. And so we want to look at whether campaigns for climate change could also apply pressure to campaigns opposing resource exploitation in West Papua, and to look at what benefits approaching both issues with similar sorts of energy and strategies might bring.
JB: You mentioned Merauke, that forest clearance and what's being done to the peatlands is part of a very disturbing ecological event really. What about those fires, isn't the Indonesian government cognisant of the environmental destruction happening?
CW-G: I think that's probably not their primary concern. The environmental destruction is far away from where the decision making is taking place. It's far away from the companies that are profiting from the resource exploitation. And West Papua has traditionally been viewed as a large expanse of vacant and usable land by the central government in Indonesia, and that's been a long-standing position on West Papua's land. It's been used as a place to send people from overcrowded islands like Java and Sumatra to relieve overcrowding in other parts of Indonesia. General (Ali) Murtopo said in 1969, I believe, that if West Papuans want their own land, they might need to go to the moon because Indonesia's not going to let any West Papuan people interfere in their plans for the land use.
JB: Charming...
CW-G: So I don't think the environment and indigenous rights and human rights are issues at the forefront of the decisions being made in terms of land clearing and overturning of peatlands and the fires that result. So it’s up to West Papuan lobby groups and supporters and people concerned about climate change in the Pacific and more broadly to bring these issues to international attention.
————————————————
http://www.radionz.co.nz/international/pacific-news/317225/jakarta-diplomacy-odd-and-backwards,-ulmwp
3) Jakarta diplomacy odd and backwards, ULMWP
5:04 pm on 3 November 2016
A warning by Indonesia's Defence Minister for Pacific countries not to speak out about West Papua has been described as an odd and backward form of diplomacy.
The Minister Ryamizard Ryacudu urged Australia to rebuke Pacific states, in particular Solomon Islands, for raising West Papua in global forums and inviting Papuans to join the Melanesian Spearhead Group (MSG).
He subsequently told Australian media that it's better if Canberra delivers the warning to Pacific governments, because if it was left to him he would 'twist their ears'.
The United Liberation Movement for West Papua's Pacific regional ambassador Akabou Amatus Douw said the minister's statements in the past week show a militaristic attitude, out of touch with Pacific Islanders.
At September’s UN General Assembly session, leaders of seven Pacific states spoke out about rights abuses in Papua and on support for Papuan self-determination.
Ryamizard warned that Indonesia would not stay silent when its sovereignty is compromised - he described Indonesia as a sleeping tiger that can attack if disturbed.
Mr Douw said the minister's sleeping tiger analogy was, in a sense, apt.
"This expression is symbolic," he explained, "meaning that Indonesia's sleeping face [will] never wake up to see what [is] their wrongdoing with massive atrocities and genocide to the Papuan minority."
The ULMWP, which has observer status in the MSG, is pushing for full membership in the group, something opposed by Indonesia which is an associate MSG member.
Mr Douw has urged the leaders of Australia and Indonesia to have a robust discussion on West Papua.
The Indonesian President Joko Widodo is due to have his first state visit to Australia this month for bilateral talks with Australia's prime minister Malcolm Turnbull.
Mr Douw is pushing for the two governments to abolish the Lombok Treaty between the two countries which formalised both governments' agreement to oppose Papuan separatism.
“This already became a hell policy," said Mr Douw, "because the fact that Australian government trained Indonesian army who evolved in killing and torturing Papuan freedom fighter then we indicated that killing of younger generation is new form of genocide."
———————————————
Posted by AWPA Sydney News at 12:28 PM