1) Jokowi Wants Papuans to be Involved in Developme 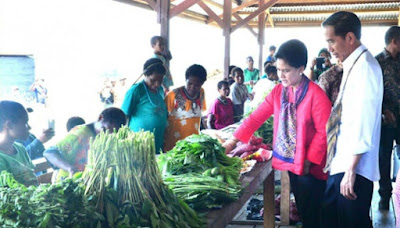 TEMPO.CO, Jakarta - President Joko ‘Jokowi’ Widodo hopes that the people of Papua and West Papua would be involved in developments and not just act as spectators. “I'm telling you, in executing the development in Papua, it is important take notice of human rights’ values,” Jokowi said on Tuesday, November 8, 2016.
According to Jokowi, the Papuans are the most essential subject in the development itself, so a cultural approach is also important. “Government management must also be great and free of corruption,” he said.
Infrastructure developments is one of the agenda that is being pushed by the government. Jokowi said the acceleration and connectivity of infrastructures between regions is important for an equal development. Establishing fuel prices in Papua to be the same as in the island of Java is Jokowi’s first move. The president said that the single price policy can help drop logistical expenses.
In a meeting on the evaluation of Papua’s development, he said that the funds allocated for Papua was not comparable to the government's goal to achieve the welfare increase in the region. The problem is not just the amount of fund, Jokowi said, but the planning process that implicates various sectors is not fully integrated yet.
Leader of the National Development Planning (Bappenas) Bambang Brodjonegoro said Papua’s development have been focusing to only four big regions, which are Jayapura, Merauke, Nabire, and Biak. According to him, the government should focus on remote regions as well.
ADITYA BUDIMAN
——————————————————————————-
http://www.thejakartapost.com/news/2016/11/09/agents-costly-one-price-fuel-policy.html
2) Agents costly for one-price fuel policy
Jakarta | Wed, November 9 2016 | 08:51 am
Nanang Kristanto was pessimistic. The Jayapura-based civil servant said the government’s newly launched one-price fuel policy would hardly affect fuel prices in remote regions across Papua and West Papua, as illegal gasoline sellers were dominating those areas.“Official gas stations in Jayapura, whether in Waena or Sentani, only operate until 7 p.m. After that, we can only rely on street sellers, who often double Premium gasoline prices from Rp 10,000 [76 US cents] to Rp 15,000,” said Nanang.He also said the situations were worse in remote areas near the border of Papua and Papua New Guinea (PNG), such as in Keerom regency, in which fuel prices could be much more expensive depending on how far the area is from urban centers.In Senggi district, for instance, premium gas sold by street sellers could reach Rp 50,000 to Rp 60,000. “I guess the new policy has yet to be an ideal solution for high fuel prices in Papua,” Nanang said.President Joko “Jokowi” Widodo has recently launched the one-price fuel policy, which aims to make the price of fuel the same in all regions across the country. The policy, which will force state-run oil and gas firm Pertamina to allocate Rp 800 billion in subsidies every year, was officially launched in Papua and West Papua on Oct. 18 and is expected to run effectively nationwide next year.Under the new policy, people in Papua and West Papua can now buy premium gas for Rp 6,450 per liter, diesel for Rp 5,150 per liter and kerosene for Rp 2,500 per liter.The government claimed that fuel in the underdeveloped regions used to be sold for Rp 50,000 to Rp 100,000 per liter, considering various issues, including high distribution costs to those regions.Pertamina marketing and trading director Ahmad Bambang said his company would try to increase the number of fuel agents (APMS) in remote areas, including in Papua, to prevent problems caused by illegal gasoline sellers in the future.“We need to bear the costs to establish more APMS by treating them the same as an official gas station. The problem is, we need the government’s support to increase the profit margin of such stations so that investors could be attracted to invest in APMS,” Ahmad said.At present, the profit margin of the sales of premium gasoline in gas stations stands only at Rp 270 per liter. As each APMS will only stock a small amount of fuel as compared to an official gas station, investors have often shown reluctance to place their money in APMS sales.As of May, Pertamina had 481 gas stations and 387 APMS across the country, including 19 APMS in Papua and 13 in West Papua.In line with the one-price fuel policy, Pertamina plans to allocate Rp 54 billion next year to build more gas stations and agents in remote areas, including in Wamena, Papua, as reported by Tribun News.Pertamina will also prioritize the implementation of one-price fuel policy in areas near the border of Kalimantan and Malaysia and remote islands in eastern Indonesia, including in Riau and North Maluku.In the areas close to the Malaysian border, such as Sambas, West Kalimantan, Pertamina plans to collaborate with Malaysia-based oil and gas company Petroliam Nasional Berhad (Petronas) to fulfill fuel demand.“We will do a swap policy with them [Petronas] so they can supply fuel to areas near the border. It’s much cheaper as compared to costs we would need to take to distribute fuel to those areas by planes,” Ahmad explained.Within the first nine months of this year, 54.5 percent of Pertamina’s gasoline sales came from premium gas, which has a Research Octane Number (RON) of 88, while 28.2 percent came from 90 RON Pertalite and 16.5 percent from the 92 RON Pertamax. The rest came from 95 RON Pertamax Plus and 98 RON Pertamax Turbo.During this period, the company saw a 17 percent annual decrease in revenues to US$26.62 billion. However, it managed to collect $1.6 billion through efficiencies by renegotiating existing contracts and cutting operational costs. Hence, its net profit soared 210 percent to $2.83 billion.
------------------
Posted by AWPA Sydney News at 11:31 AM