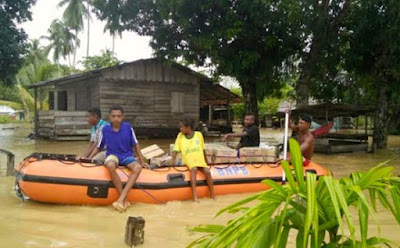 West Papua: Local Community Accuses Conglomerate of Severe Land-Grabbing Threatening their Livelihood
After almost six-months in the waiting, it has been confirmed that the West Papuan Yerisiam Gua indigenous community’s complaint against a conglomerate responsible for severe logging in their homeland has yet to be officially responded to. The charges brought forward against a subsidiary of Goodhope Asia, a Sri Lankan-owned company, include the clearing of almost 32,000 hectares of land for a palm oil plantation. The large-scale deforestation has led to severe flooding, threatening the livelihood of the local population which, needless to say, does not benefit from this systematic land grabbing and Goodhope Asia’s activities to begin with.
The article below is courtesy of Corp Watch:
The Yerisiam Gua indigenous community of West Papua filed a complaint six months ago against a Sri Lankan owned conglomerate for taking over their land to create a palm oil plantation. To this day, the industry body charged with oversight has yet to formally respond to their concerns. The charges were filed against PT Nabire Baru, a subsidiary of Goodhope Asia, which in turn is majority owned by a subsidiary of Carson Cumberbatch, a conglomerate based in Colombo, Sri Lanka. In 2012, the company was reported to have cleared 32,000 hectares in Nabire province on the island of New Guinea on which they intended to plant four million palm trees. (One half of the island is the country of Papua New Guinea while the other half is the Indonesian province of West Papua, where Nabire is located)

This PT Nabire Baru plantation encroaches on the customary lands of the Yerisiam Gua peoples, who have written letters and protested peacefully against the project for the last four years. On April 12, 2016, Enos Abujani, a member of the Yerisiam Gua community, spotted PT Nabire Baru bulldozers felling sago trees in the Manawari grove, which the indigenous people consider sacred. After Abujani informed the rest of the community, a small group arrived to protest.  "I felt my stomach churning as I watched them work," Gunawan Inggeruhi, a community human rights advocate, told awasMIFEE!, an activist group based in the UK. "I feel sorrow, as if I have been stripped naked," Mama Yakomina Manuburi added. "[The grove] is our livelihood. If I pound the sago inside the trunk, I can get 100,000 Rupiah, I can buy the things I need, such as salt, MSG, soap."
The bulldozers were accompanied by Brimob, the Indonesian police mobile brigade, whom the local community have often accused of violence against customary land owners. “We have never asked Brimob to come here. Actually their presence makes us feel nervous, not safe”, Karel Maniba told told awasMIFEE! "How could we have asked for them? How could bringing in Brimob to work as security guards be anything to do with us?" One week later, the community members filed an official complaint with the Round Table on Sustainable Palm Oil (RSPO), an industry group that PT Nabire Baru belongs to. (The RSPO was created in 2004, mostly by industry, to certify palm oil companies on mutually agreed standards including on responsible land management.)
"To this day there is no clear agreement between the indigenous community and PT Nabire Baru, yet our forest continues to be transformed into bare earth as expansion continues. The company stubbornly and unilaterally cleared the sago grove, going against the community opposition," wrote Roberthino Hanebora, the secretary of the Yerisiam Gua Wider Ethnic Group. "The sago groves in question have existed naturally since ancient times, and are sacred sago groves which have provided food for the people of Sima village from generation to generation up to the present day." Goodhope staff says they have since met with the Yerisiam Gua community to discuss their complaints. "Not even point one percent we will abandon them if it is not personal but the interest of the whole community," Sanjaya Upasena of Goodhope Asia told community members, according to a company transcript. "100 percent support the community ... as long as they are not self-centred."
Palm oil plantations have been a source of controversy for over 20 years, ever since agribusiness companies started to set them up in Indonesia and Malaysia. Many such plantations have set up on land carved directly out of primary rainforests in order to meet demand for the oil, which is a key ingredient in a number of household products from cosmetics like shampoo and lipstick to foods like ice-cream and snacks.

"For an industry like palm oil, already known as controversial and high-risk in areas of environmental degradation and human rights violations, the need for RSPO to have a credible and transparent redress mechanism is simply magnified, if this organization wants to show that it is serious," Andrew Ng, a founder of the consultancy Grassroots, told the MongaBay website. "[But] in a secretariat of 60+ people they have one person handling complaints as the coordinator." The RSPO has often investigated member companies but it has only taken serious action once. Earlier this year the industry body suspended IoI, a Malaysian company following activist complaints. But five months later, the suspension was lifted.
Photo Courtesy of Corp Watch
Posted by AWPA Sydney News at 1:31 PM