Two articles from Jubi added below.
1) Hundreds of Maybrat residents fled and fled to the forest
2) Activists demand military to release two civilians accused of attacking military post in Maybrat

In the early hours of the 2nd September, The TPNPB-OPM  raided the Kisor military post in the Maybrat regency, West Papua Province.  Four soldiers were killed and two wounded.

The provincial military commander Maj. Gen. I Nyoman Cantiasa said.“I have ordered my personnel to hunt down the group,”  adding that two platoons had been deployed for the task. 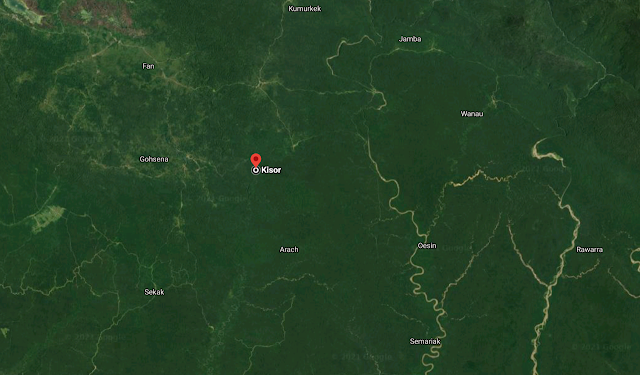 Local People have fled to the forest to avoid a possible security force operation in the area.

Joe Collins of AWPA said, "West Papuans are well aware of what occurs during military operations. Houses are burned, food gardens destroyed and the military consider every Papuan to be a potential OPM member, resulting in possible arrest and torture". 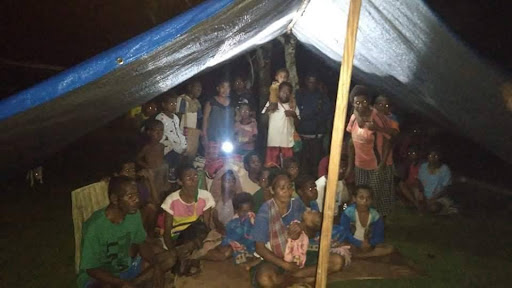 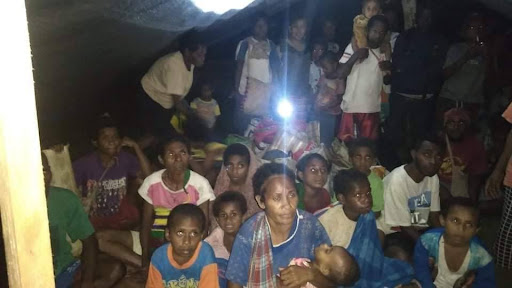 Photos posted in AWPA FB (with the below text).

Refuge Urgen KAB MAYBRAT from the district of South Aifat, the village durable maym, they are out of their hometown because in their hometown is being mastered by the joint of TNI-POLRI, and they are afraid because of many experiences that the behavior of TNI and POLRI members is not good that they are not differentiate which civilian people but which PB, then the following they ask for spya member of TNI police do not stay in the village to go into the forest chasing the perpetrators of the village we are civilian people stay that's what they say

The proposal of the TNI-POLRI forces that give the target a panic and afraid, if the army has a lot of people who want to do it, don't go there, don't make a post in skola, in the work, because later we have a skola and work can be a goal. 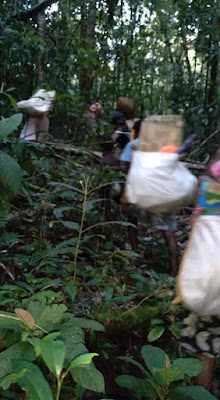 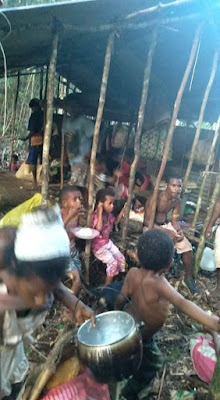 Jubi has reported that the The Governor of West Papua, Dominggus Mandacan has asked the people of South Aifat District, Maybrat Regency to return to their villages and return to their normal activities. Mandacan said residents need not worry about the security situation in Maybrat. (Jubi)

Joe Collins said, "the attack on the military post is receiving a lot of media attention and hopefully this will be enough to stop any abuses against the local people by the security forces.". 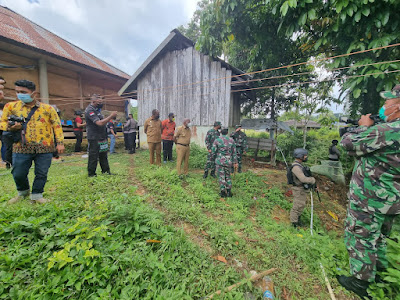 The South Sorong Police Chief AKBP Choiruddin Wachid, accused the KNPB in the Kisor area of being part of the attack on the Kisor military post. The West Papua National Committee  spokesperson for the Maybrat region, Rudolof Fatem, denied the accusations.

"We don't know about the murder incident of 4 TNI members in Kisor Sorong Selatan. Police don't criminalize KNPB Maybrat with unfounded unilateral claims," ​​he told jubi via his cell phone, Sunday (5/9/2021). Fatem said that the KNPB had never been involved in any killings. “We, the KNPB, were established to convey the aspirations of the Papuan people in a peaceful manner. Not by means of violence let alone kill people. So don't scapegoat the KNPB without clear evidence," he said.

Two people,  Maikel Yaam (17) and Simon Waymbewer (26)  were arrested by the military on Thursday 2 September and accused of being involved in the attack.

Yan Christian Warinussy (Executive Director of the Manokwari Research, Assessment and Development Institute for Legal Aid (LP3BH))  urged the military  to release Maikel Yaam and Simon Waymbewer  "We LP3BH Manokwari have received information from our sources in South Aifat District, that these two young people are not part of the attack group.

Jubi also reported that the  Head of KNPB Region I, Maybrat Yohanes N. Assem,  had also asked the West Papuan Police Chief Inspector General Pol Tornagogo Sihombing to release the two arrested people. He said they are  not KNPB members. “Simon Waimbewer is a member of the Satpol-PP and Maikel Yaam is a civilian. It is very inhumane to act by the police against innocent civilians. Immediately release them unconditionally," he said. 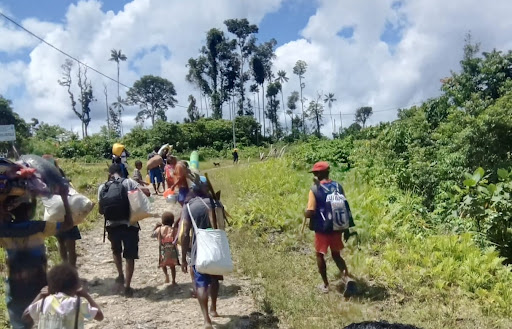 Jayapura, Jubi – Chairman of the Apostolic Commission for Lay Manokwari-Sorong Diocese, Father Isak Bame Pr said residents from five districts in Maybrat Regency, West Papua, fled after the attack on the Preparation Koramil Post in Kisor Village, South Aifat District, Maybrat. Father Isak asked the warring parties to ensure that civilians did not become victims of their conflict.
Father Isak Bame Pr said the displaced residents came from South Aifat District, East Aifat District, Middle East Aifat District, South East Aifat District, and Far East Aifat District. Father Isak said the hundreds of displaced residents were scattered in the forest, avoiding sweeping by the TNI/Polri security forces who were looking for the perpetrators of the attack on the Preparatory Koramil Post in Kisor that occurred on Thursday (2/9/2021).
“We ask for the prayer support of our fellow priests and all Papuan people. So that civilians do not become victims of the TNI/Polri and TPNPB," said Pastor Isak when contacted by Jubi on Monday (6/9/2021).
Read also: KNPB Maybrat denies police accusations related to the murder of 4 TNI members
He stated that it was also difficult for priests and church leaders to carry out their activities, because the bridge to Aisa, Ainesra had been damaged by unknown people. The bridges leading to Kamundan, Fuok, Sabah, Nasipman were also damaged, making it impossible for vehicles to pass. "It is sad that the activities of the people have been hampered, so we are still accommodating some residents who fled near the St. Andreas Parish in Ayata," said Father Isak.
He stated that more and more security personnel were sent to Maybrat. Among other things, they were seen building checkpoints in Kisor and Sesemuk. Security forces were also seen increasing in Ayamaru, East Aifat. "We hope that the TNI/Polri who enter the village do not act [recklessly] to the civilians who are in refugee camps or in their villages," he said.
Head of the West Papua National Committee (KNPB) Maybrat, Yohanes Assem confirmed the information that residents from five districts in Maybrat had fled. “That's right, the civilians are evacuating. But we don't know how many people have fled. Because of the distance and they fled in a state of panic. So we can't say for sure," he said.
Read also: Governor of West Papua invites the people of Kisor to return to their village
Assem said that if the TNI/Polri wanted to fight, please go to war with the West Papua National Liberation Army-Free Papua Organization (TPNPB-OPM). He hoped that civilians would not become victims of clashes between the security forces and the TPNPB-OPM. "Don't let civilians become victims because of the steps taken by the TNI/Polri to look for TPNPB-OPM, or vice versa," said Assem.
Previously, the Executive Director of the Manokwari Institute for Research, Assessment and Development of Legal Aid (LP3BH), Yan Christian Warinussy, urged the Commander of the XVIII/Kasuari Military Command to release Maikel Yaam (17) and Simon Waymbewer (26), two residents who were arrested by Battalion 726/VYS soldiers. and Kodim 1809 Maybrat in Kisor Village on Thursday (2/9/2021). Warinussy stated that the two people arrested were civilians, not part of the group attacking the Preparation Command Post in Kisor.
“We, LP3BH Manokwari, have received information from our sources in South Aifat District, that the two young people were not part of the attack group. Unlike what the media reported, [they are not] part of the Armed Criminal Group (KKB) led by Mamfred Fatem,” he said. (*)
Editor: Aryo Wisanggeni G

https://en.jubi.co.id/military-detained-two-civilians-accused-of-attacking-military-post-in-maybrat/
2) Activists demand military to release two civilians accused of attacking military post in Maybrat
News Desk September 6, 2021 3:04 pm
Jayapura, Jubi – Rights defender and lawyer Yan Christian Warinussy, the director of the Institute for Research, Assessment, and Development of Legal Aid (LP3BH) Manokwari, has urged the commander of XVIII/Kasuari Military Command to release Maikel Yaam (17) and Simon Waymbewer (26) who were detained by soldiers of the Battalion 726/VYS and Kodim 1809 Maybrat in Kisor Village, South Aifat District, Maybrat Regency on Thursday, September 2, 2021.
Yaam and Waymbewer were accused of being part of the group that attacked the Kisor Military Post on September 2, which resulted in the killing of Kisor Military Post commander First Lt. CHB Dirman and three of his members. Two other soldiers were injured in the incident.
Warinussy defended the two, saying they were innocent civilians. “We have received information from our sources in the South Aifat District that these young people are not part of the armed group led by Mamfred Fatem as reported by the media,” he told Jubi.
Besides Warinussy, West Papua National Committee (KNPB) head of Maybrat Area Yohanes Assem also demanded the release of Yaam and Waymbewer. Assem asked West Papua Police chief Insp. Gen. Tornagogo Sihombing to free the two, adding that they were not members of the KNPB.
“Simon Waymbewer is a member of the Public Order Agency while Maikel Yaam is a civilian. Please immediately release them,” Assem said.
Warinussy said the XVIII/Kasuari commander must involve police investigators, both from the West Papua Police and Maybrat Police, to find out the perpetrators of the attack on the Kisor Military Post. “As mandated in Law No.8/1981 on the Criminal Procedure Code,” he said.
He also asserted the importance of involving church leaders and traditional leaders of the local community to investigate the case.
Warinussy added that above all, the military and police must prioritize the safety and security of the people of Kisor. “We strongly urge the protection of the indigenous people in Kisor Village, who have fled their hometowns and entered the forest area [due to recent attack],” he said.
Reporter: Hengky Yeimo
Editor: Kristianto Galuwo