1) At least 20 dead in protests in Indonesia's West Papua 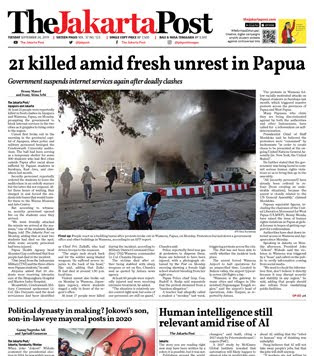 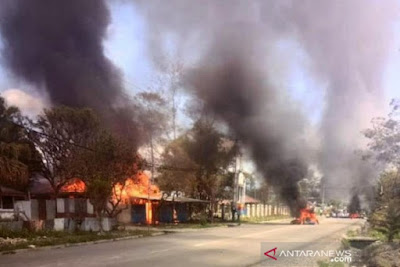 A riot broke out in Wamena, the capital city of Jayawijaya District, Papua Province, on September 23, 2019 (ANTARA/HO/pri)
Jakarta (ANTARA) - The Indonesian Police revealed that they were thoroughly examining a likely link between a rally that native Papuan students staged at the Cenderawasih University campus in Jayapura and a riot in Wamena on Monday."The two rallies are different but police investigators are examining an indication of their linkage," National Police Spokesman, Brig.Gen.Dedi Prasetyo, told journalists in Jakarta on Monday.As requested by the Cenderawasih University (Uncen) rector, the security personnel negotiated with the demonstrating students who occupied the auditorium of the campus and disrupted the teaching and learning process at the public university, he said.Initiated by the students who recently returned home after leaving their universities outside the Papua and West Papua Provinces, the demonstrators demanded that they should be allowed to set up a command post inside the Uncen campus.The Papua police and rectorate at Uncen did not allow them to stage the demonstration. Instead, the police asked the demonstrators to get back to the Expo Wamena area and facilitated this through military trucks and public buses, escorted by security personnel.However, several demonstrators who belong to the Papua Student Alliance (AMP) attacked and killed one of the drivers of the trucks. The victim was identified as an Indonesian soldier named Private Zulkifli.Regarding the Wamena rioting, Papua Police Chief, Inspector General Rudolf A. Rodja, believed that the violence might have been fueled by the proliferation of hoaxes through social media platforms that incited public ire among the residents of Wamena."We are on the lookout for those creating and spreading fake news," he stated.The riot that erupted in Wamena, the capital city of Jayawijaya District, Papua Province, on Monday, resulted in several properties, including people's houses, the Jayawijaya district office, and motorcycles being burnt."I have just received information about several motorcycles in Wamena being set alight," he revealed.Related news: Authority confirms suspension of flight operations at Wamena AirportSeveral local media reports stated that the Wamena riot was instigated by hoaxes pertaining to a teacher's racist slur against native Papuan students.Due to the riot that broke out in Wamena, the Wamena Airport authority temporarily grounded flight operations on Monday."The suspension was put in place at 10:30 a.m. local time after three cargo aircraft were allowed to take off," Head of Wamena Airport, Joko Harjani, stated.Harjani noted that the airport authority serves 120 daily flights from and to Wamena, though today's riot that had ended with the rampant scorching of buildings and kiosks in the city led to the suspension of flight operations at the airport. Related news: President orders authority to tackle Papua unrest: MoeldokoRelated news: Papua Police Chief confirms hoax fueled mass protest in WamenaRelated news: Police launch manhunt for hoax suspectEDITED BY INE
Posted by AWPA Sydney News at 2:10 PM