4) Get out, churches tell Indon troops

5) Death Toll Climbs in Indonesia’s Papua Protests
-----------------------------------------------
https://www.rnz.co.nz/international/pacific-news/399625/australia-urges-restraint-in-west-papua-amid-ongoing-violence
1) Australia urges restraint in West Papua amid ongoing violence
6:47 am today
Australia's government has urged restraint by all relevant parties in West Papua amid ongoing unrest in the Indonesian ruled region.
The death toll from violence in the Papuan cities of Jayapura and Wamena on Monday hasrisen to 26.
Violence erupted in both cities as Indonesian security forces cracked down on student protests.
This follows weeks of unrest triggered by large protests in the region last month.
Outside the UN headquarters in New York, Australia's Foreign Minister Marise Payne told SBS that her government was seeking updates about the situation.
"Well we are obviously very concerned about the reports of violence in Papua and West Papua. And they are matters which our post in Jakarta is obviously following up with authorities there. We urge absolute restraint from both sides in actions that are happening on the ground there.”
Monday's unrest in Jayapura led to the arrest of over 700 Papuan students.
Many of them had recently returned home early from study in Javanese cities, where racist attacks on Papuan students last month prompted widespread protests in the Papuan provinces, and also raised fears for the students' safety.
An additional 6000 Indonesian police and military personnel were deployed to the heavily restricted region by early September as unrest sparked by the protests left at least ten people dead.
Since last year, Indonesian security forces in Papua have also been preoccupied in the Highlands region by a protracted armed conflict with a pro-independence guerilla unit named the West Papua Liberation Army.
The ongoing unrest, as well as issues of human rights abuses and self-determination in Papua, is expected to be raised by some Pacific Islands leaders at this week's UN General Assembly.
------------------------
https://eng.jubi.co.id/repainting-kelly-kwaliks-grave-to-shift-the-issue-of-worship-ban/
2) Repainting Kelly Kwalik’s grave to shift the issue of worship ban
Published 1 day ago on 25 September 2019 By pr9c6tr3_jube 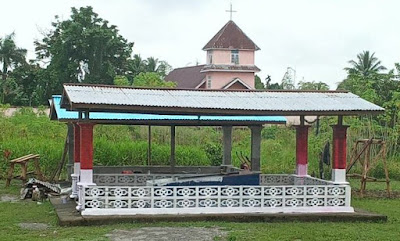 The grave of a leader of the National Liberation Army Kelly Kwalik in Timika, Mimika Regency is now painted in red-white colours. – IST
Jayapura, Jubi – The repainting activity on the grave of Kelly Kwalik by the Police is to shift their action to dissolve the worship ceremony on Thursday (19/9/2019). It is also considered hurting the sense of justice among Papuans.
The Rev. Deserius Adii, the Justice and Peace Department Chief of Kingmi Church for Puncak Selatan Region, asserted that the security forces in Timika repainted the grave of Kelly Kwalik, a leader of West Papua National Liberation Army into red-white colours. Further, he considered the repainting by the security forces to shift the issue of forced dissolution against the local community by the Mimika Police on Thursday.
“Kwalik’s grave was painting with the colour of morning star because he died to fight for justice and peace for his people. But the security officers repainted it with red and white,” Adii told Jubi on Friday (20/9/2019).
Also, the police did it after they dissolved the workship ceremony involving Papuan students who returned from other Indonesian cities and towns, he said. However, he assumed the police had planned it for quite a long time. Before the dispersion, many unknown people have settled around the grave of Kelly Kwalik.
“After the police dissolved people in the worship ceremony, the number of people around the grave was increased. Three residents arrested while watching the police did their job and took them to the Mimika Police station,” said Adii.
He further thought that the repainting of Kwalik’s grave had hurt the sense of justice of West Papuans. “Kelly Kwalik killed by the security forces because fighting for the rights of his people. Now, they repainted his grave with red-white colours. Do they ashamed of their actions or not? Adii questioned.
Meanwhile, a legal officer of LEMASA Patrick Wetipo considered the security forces had made a big mistake by dispersing the worship ceremony and repainting the grave of Kelly Kwalik. “They banned the “Bakar Batu” (stone-roasting) ceremony. It’s harassment towards the Papuan culture,” he said.
Moreover, Wetipo stated that the security forces should be responsible for the death of Kelly Kwalik, who’s shot when surrounded by the police on 16 December 2018. However, they are now changing the colours of his grave into red-white.
“Kelly Kwaling were fighting for the independence of Papuan people. The colours of the morning star are for respecting his fight. But by repainting his grave indicates that the security forces continuously showed injustice against Papuans,” he said. (*)
Reporter: Hengky Yeimo
Editor: Pipit Maizier
----------
https://en.antaranews.com/news/133544/police-identify-group-spreading-rumors-in-timika
3) Police identify group spreading rumors in Timika
8 hours ago
Timika, Papua (ANTARA) - The Mimika Police in Papua has identified the group allegedly spreading rumors to create unrest in Timika, Mimika Police Chief Adjunct Senior Commissioner Agung Marlianto said here Wednesday. The group comprising some 30 to 40 members had attempted to create tension and anxiety among the people by systematically spreading fake news, Marlianto said.
"Based on information from witnesses, they claimed to be students. They are relatively young," he added.
Related news: PLN Power Recovery Team again electrifies Wamena
Marlianto has called on Timika residents to be fully aware of the group's nefarious attempts.
The group has spread rumors about security personnel distributing poisoned food to Papuans in Timika, according to Marlianto.
It also intimidated some Papuans school students in Limau Asri Village and Kwamki Narama District with messages on their mobile phones.
Related news: Deployment of two TNI aircraft to evacuate riot victims in Wamena
The group provoked students to set fire to some buildings in Timika including vital and strategic installations, shops, and kiosks, he said.
The Mimika Police has positioned its personnel in some schools, especially those with majority Papuans students in anticipation of any unwanted incidents.
"We have also deployed Community and Society Development Unit (Binmas) personnel to counsel students from being provoked by the irresponsible group," he said.
Related news: Police puts Wamena riot death toll at 23
Nearly 23 people died and a dozen others sustained injuries when a violent rally erupted in Wamena, Jayawijaya District’s capital city, Papua on Monday, September 23.
The violence might have been fueled by rumors spread through social media platforms that angered residents, Papua Police Chief Inspector General Rudolf A. Rodja said while speaking in connection with the rioting.
The riot was instigated by rumors about a teacher's racist slur against native Papuan students, according to several local media reports. (INE)
Related news: Thousands seek refuge at Jayawijaya Police Headquarter after riots


4) Get out, churches tell Indon troops


The students were among those studying in other Indonesian provinces who returned home during previous protests last month. Those protests were triggered by videos circulated on the internet showing security forces calling Papuan students “monkeys” and “dogs” in East Java’s Surabaya city when they stormed a dormitory where Papuan students were staying after a torn Indonesian flag was found in a sewer.
The students had forced a local state university to accommodate them, and their protest turned violent on Monday as a mob of angry students attacked a soldier and several police officers with machetes and rocks, resulting in security forces responding with gunfire, killing three civilians. The soldier died on the way to a hospital. At least five police officers were in critical condition.
National Police Chief Tito Karnavian told a news conference Tuesday in the capital, Jakarta, that most of victims in Wamena were non-indigenous Papuan people.
He said the situation was brought under control on Tuesday after more police and soldiers were deployed to restore security in the region.

He accused separatist leader Benny Wenda of orchestrating the previous unrest in Papua and West Papua provinces ahead of a U.N. Human Rights Council meeting on Sept. 9 and the annual U.N. General Assembly on Monday, to draw international attention to Papua.
Wenda, who has been living in exile in Britain for years, is known as the leader of the United Liberation Movement for West Papua, a political wing of the Free Papua Movement in exile.
Sebby Sambom, spokesman for the West Papua National Liberation Army, the military wing of the Free Papua Movement, denied Indonesian accusations that it was involved in the violent protests.

Enjoying this article? Click here to subscribe for full access. Just $5 a month.
“We have not taken a stand in this people’s protest over racism against indigenous Papuans,” he said in a statement. “This is purely an action carried out by the entire society.”
During Tuesday’s news conference, Indonesia’s coordinating minister for politics, law and security alleged that separatist groups were trying to foment conflict by exposing a mistake made by security forces that does not represent most Indonesian’s attitudes or behavior.
Conflicts between indigenous Papuans and Indonesian security forces are common in the mineral-rich but impoverished Papua region, a former Dutch colony in the western part of New Guinea that is ethnically and culturally distinct from much of Indonesia.
The region was incorporated into Indonesia in 1969 after a U.N.-sponsored ballot that was widely seen as a sham. Since then, a low-level insurgency has simmered in the region, which is divided into two provinces, Papua and West Papua.
In recent years, some Papua students, including some who study in other provinces, have become vocal in calling for self-determination for their region.
By Niniek Karmini of The Associated Press.
-------------------- 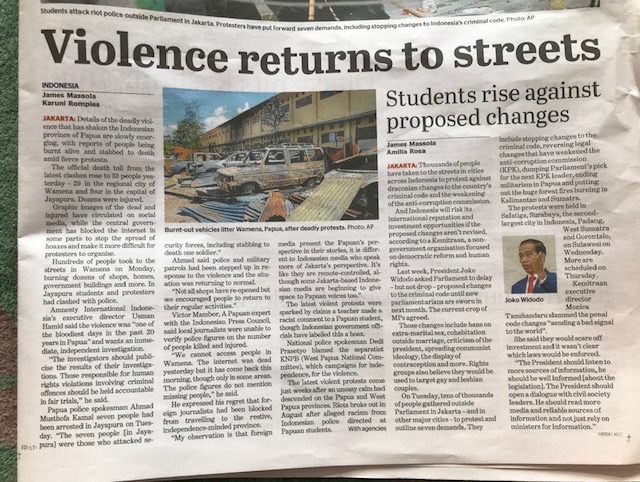