2) A Fair Deal with Papua
3) Prabowo, Ex Intelligence Chief to Discuss Papua Issues
4) Provocation to cause anarchy continues in Papua: Wiranto
5) Protesters in Papua want independence, but will it be another East Timor or Aceh?
6) NZ 'deeply concerned' by West Papua violence
7)  Tensions in Papua and hyper-nationalism in Indonesia
----------------------

https://en.antaranews.com/news/132252/wiranto-discloses-conspiracy-involving-separatist-leader-benny-wenda
1) Wiranto discloses conspiracy involving separatist leader Benny Wenda
3 hours ago
Jakarta (ANTARA) - Coordinating Minister for Political, Legal and Security Affairs Wiranto has accused West Papuan separatist leader Benny Wenda of being involved in a conspiracy during the protests that turned violent in Papua and West Papua. "Based on our observation, and information that we received, such a conspiracy does exist, on the mutual relations between Wenda and two organizations," Wiranto said in a press conference here Thursday.The two organizations are The United Liberation Movement for West Papua (ULMWP) led by Wenda and The National Committee of West Papua (KNPB).The conspiracy ignited anarchy during the protests in the easternmost provinces, the minister remarked."It exists, we have not made it up. The police chief has reported this to me. So, it is clear there was foreign and local intervention," he reiterated.Related news: President orders crackdown on rioting, anarchy in PapuaRelated news: Provocation to cause anarchy continues in Papua: WirantoThe government had the evidence but it could not disclose all information regarding the operations in Papua, Wiranto noted."Entrust this to the security personnel and they will give their best to secure the public interest and secure people's normal life in Papua and West Papua," Wiranto said.On Wenda's citizenship, Wiranto said that he lost his citizenship after he could not submit a report to the authority of his five years in exile in the United Kingdom."After we checked it, he lost his status as an Indonesian citizen. It is under the law, as he lived abroad for more than five years without submitting any report," he noted.Wenda was awarded the Freedom of the City of Oxford in July.Wenda had received permanent residency in the United Kingdom, Wiranto said. "He was awarded honorary citizenship from Oxford. It was not from the UK government but from Oxford."Previously, the Indonesian Police Chief Gen. Tito Karnavian accused Wenda, ULMWP and KNPB of igniting the anarchic protests in Papua and outside the province.Therefore, Karnavian cautioned the public to not be provoked by any parties who wanted to create unrest in the province."ULMWP and KNPB are responsible for many maneuvers. We will initiate legal action against them," Karnavian said.  Related news: Socio-cultural dialog needed to resolve Papua problems: MUIRelated news: No foreign assistance sought to placate tensions in Papua: Wiranto
—————————————
https://en.tempo.co/read/1244194/a-fair-deal-with-papua
2) A Fair Deal with Papua
5 September 2019 16:10 WIB 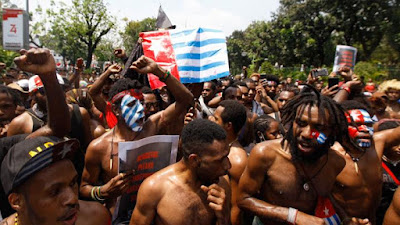 Papuan students staged a protest in front of Indonesia Army headquarters in Jakarta, August 22, 2019. Hundreds of Papuans staged a peaceful protest in the Indonesian capital of Jakarta on Thursday, August 22, 2019, demanding self-determination for West-Papua after the detention of Papuan students in East Java stoked accusations of racism. TEMPO/Subekti
TEMPO.CO, Jakarta - If the government had been quicker to take the right steps to calm the situation, the disturbances in Papua would not have spread. But exactly the opposite happened: protests spread giving the impression they could not be stopped.
Having started with the racial abuse and persecution of students in a dormitory for Papuans in Surabaya, East Java a day before Independence Day, demonstrations have spread across Papua in the last two weeks. It is regrettable that the East Java police, led by Insp. Gen. Luki Hermawan, failed to anticipate the potential for disturbances. This is unfortunate because Luki is a senior officer with a career in intelligence behind him.
The demonstrations led to violence in Manokwari and Sorong, West Papua. There was also rioting in Deiyai Regency, Papua on Wednesday, August 28 that is thought to have resulted in the deaths of three people – one of them a member of the Indonesia Military (TNI). A day later, buildings were set alight in Jayapura, the Papuan capital.
It should not have been difficult for intelligence officers to detect signs of impending violence in Papua, which is often the scene of social conflict. The impact of racism would have been easy to foresee if the intelligence service and the authorities had not underestimated the size of the problem. The intelligence personnel scattered around Papua should have been able to detect the movements of elements within Papua such as students, activists and ordinary people, who protested and demanded a referendum to decide on independence for the province. Police intelligence officers, the army and the State Intelligence Agency failed to read the signs, despite the fact that the West Papua Police chief, Brig. Gen. Herry Rudolf Nahak is a senior officer who has had considerable experience in anti-terrorism.
It is highly likely that the disturbances could have been minimized if the police had moved quickly to investigate the racism directed towards the Papuan students. But East Java police only named one suspect, a former Surabaya City legislative candidate from the Gerindra Party, Tri Susanti, 12 days after the incident. Meanwhile, the TNI only announced the discharge of its personnel who were involved in the racism a week afterward.
Instead of resolving the issue, the government and security forces made a series of blunders. In Bandung, West Java, the police fanned the flames by giving Papuan students alcoholic drinks. This idiotic move went viral and further angered Papuans, who refuse to be identified as drunks.
The government also acted recklessly and gave the impression of panicking in its response to the conflict. Claiming it was to hasten the restoration of order, the Communications and Information Ministry blocked Internet access in Papua, despite there not being an emergency requiring restrictions to access to information. The government added to the discrimination and isolation of the Papuans and deprived them of access to information. Instead of limiting the spread of fake news, the block made it difficult to verify that rumors were hoaxes.
The government and the security forces should know the locations and movements of conflict in the region particularly the people behind them. In the past, protests depended on tribal and traditional leaders. Nowadays, young people are at the vanguard calling for the rights for the Papuan people as a whole not just their own tribes.
At the start of his administration, President Joko Widodo demonstrated his concern for the people of Papua by his frequent visits there. During the 2014 election campaign, he went there for the first time even though the region does not have many voters. But during his first administration, there was the impression that the government simplified the problem by believing Papua’s difficulties could be overcome simply by building infrastructure.
It is time the government took another look at the studies about Papua that have been carried out by universities and academics. The problem is not just a matter of transportation links between regencies, but also inequality, injustice and the lack of respect towards the Papuans as human beings. The president must ensure that the people of Papua are not treated like second class citizens.
As well as apologizing, Jokowi should move quickly to resolve the human rights abuses that have happened there. The guilty must be punished. The government, together with the police and the TNI must prioritize dialog and stop taking repressive measures against civilians. Without a solution that addresses the roots of the problem, the conflict in Papua will never end.
Read the Complete Story in this Week's Edition of Tempo English Magazine
——————————————————
https://en.tempo.co/read/1244289/prabowo-ex-intelligence-chief-to-discuss-papua-issues?Engteco_newsUtama&campaign=Engteco_newsUtama_Click_2
3) Prabowo, Ex Intelligence Chief to Discuss Papua Issues
Translator:

5 September 2019 21:03 WIB
TEMPO.CO, Jakarta - A meeting is reportedly scheduled to take place between Gerindra Party Chairman Prabowo Subianto and former Indonesian Intelligence Agency (BIN) Chief  A.M. Hendropriyono tonight.
This rumor has been confirmed by the Gerindra Chairman's spokesman Dahnil Anzar Simanjuntak; “That is true, Pak Prabowo is set to meet Pak Hendropriyono.”
However, Dahnil did not reveal any details regarding the meeting, mainly what would be discussed in the meeting that will be held at Hendropriyono’s house in the Senayan, South Jakarta.
According to Hendropriyono, they will mainly discuss issues regarding Papua and West Papua and how the nation should unite to face the problem collectively.
“No more criticism, check and balances, that’s acceptable in a normal situation. This is no longer a normal situation and everyone must unite,” said Hendropriyono to journalists in South Jakarta today, September 5.
BUDIARTI UTAMI PUTRI
-----------------------------
https://en.antaranews.com/news/132230/provocation-to-cause-anarchy-continues-in-papua-wiranto

4) Provocation to cause anarchy continues in Papua: Wiranto