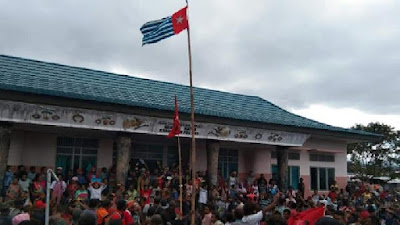 TEMPO.CO, Jakarta - A politician from Perindo Party of Sorong Sayang Mandabayan is undergoing police question in Manokwari Resort Police Headquarters, Papua, over the possession of 1,500 flags of Bintang Kejora or morning star, the symbol of the Free Papua Movement.
“The questioning is still afoot in Manokwari police headquarters,” said National Police spokesman Brig. Gen. Dedi Prasetyo in his office, South Jakarta, Tuesday, September 3.
Sayang was arrested in Rendani Airport, Manokwari, right before claiming his baggage. The airport’s Aviation Security (Avsec) suspected Sayang’s wary behaviors.
The team then searched through his belongings and discovered 1,500 pieces of the small flag of Bintang Kejora in his pink suitcase. He was brought to Rendani Sector Police to be picked by Manokwari police officers for further examination.
Dedi said that according to Manokwari Police, Sayang Mandabayan boarded Wings Air from DEO Airport Sorong to join a peaceful rally which would take place today, September 3, in Manokwari. “We are still examining the suspicion,” he concluded.
ANDITA RAHM
-------------------------------------------
https://en.tempo.co/read/1243288/68-named-suspects-in-papua-unrest?Engteco_newsUtama&campaign=Engteco_newsUtama_Click_1

3 September 2019 15:27 WIB
TEMPO.CO, Jakarta - National Police have named more suspects in the Papua unrest, that broke in Papua and West Papua provinces, up to 68 people.
“Based on current information, 68 people have been named suspects. The new suspects come from Deiyai,” said National Police spokesman Brig. Gen. Dedi Prasetyo in his office, South Jakarta, Tuesday, September 3.
Dedi explained that Papua regional police are still examining the suspects' roles to discover whether they are involved in the death of one Indonesian Military (TNI) personnel and two civilians.
As of date, the suspects from Papua amounted to 48 people, while the remaining 20 are from West Papua.
All suspects, he went on, are charged with Article 170 concerning the act of attacking and injuring others, Article 156, and Article 365 of the Criminal Code, as well as Article 1 of Emergency Law No.12/1951.
ANDITA RAHMA
------------------------------
https://en.antaranews.com/news/132038/police-clear-air-on-no-further-protest-counter-demonstration-in-papua
3) Police clear air on no further protest, counter-demonstration in Papua
1 hour ago
Jayapura (ANTARA) - The Papua provincial police clarified that no further protesting or counter-demonstration will be held in Jayapura, Papua Province’s capital city, following a protest against racial slurring on Thursday, August 30, that snowballed into rioting."As of today, no protest will be held here," Papua Police’s spokesman A. M. Kamal had stated in Jayapura, Tuesday.Any appeal on today's massive demonstration from two different communities was an ongoing issue, yet as Kamal stated he will coordinate with the Police's intelligence and security division.However, the issue that spread like wildfire on social media had triggered concerns among Jayapura's residents, as was apparent from the recent condition in shopping centers and offices that wore a desolate look.Jayapura Mayor Benhur Tommy Mano has been urged to stop any school activities until now.Speaking in connection with the protest wave, Kamal affirmed that the Papua Provincial Police chief had issued an edict for Papuans to help maintain a conducive situation, as there was no need for them to hold or join any protest act that can potentially hinder public activities. Related news: West Papua police arrest 20 alleged riotersRelated news: Police confirm death toll reaches four in Papua's communal clashesEDITED BY INE
-------------------
https://en.antaranews.com/news/132042/government-to-restore-public-facilities-damaged-in-papua-unrest
4) Government to restore public facilities damaged in Papua unrest
1 hour ago
Jayapura, Papua (ANTARA) - The government will conduct the renovation of buildings and public facilities that had incurred damage during the rioting that had erupted in Jayapura on August 29, Public Works and Public Housing Minister Basuki Hadimuljono stated."We have identified (the facilities), and we are optimistic of the cost of their renovation not being too high," Hadimuljono noted here on Tuesday.The minister confirmed that government offices, shops, and public residences will be prioritized during renovation.Hadimuljono confirmed that the renovation work will begin on Tuesday in Waena, Jayapura Port, as well as target public facilities in other areas damaged during the protest that took a violent turn on late August."We have coordinated with the National Disaster Mitigation Agency (BNPB) to help restore public shops and residences," he stated.However, the government has yet to furnish details on the number of buildings and public facilities that have to be renovated.The mass rally on August 29 in Jayapura over racist slurs against Papuan students in Surabaya and Malang, East Java, turned violent, as protestors started pelting stones and torching some buildings.Among the public facilities that suffered damage in the rioting were the offices of Papua People's Assembly (MRP), Papua Religious Empowerment Agency, Papua Agriculture and Food Resilience Office, Papua Health Office, Jayapura parliament building, Religious Affairs Office, Law and Human Rights Office, and Jayapura One Stop Administration Services (Samsat) Office. Related news: Parliament to hold hearing on Papua riotsRelated news: Sorong Immigration Office deports four Australians from West PapuaEDITED BY INE
----------------------
https://en.antaranews.com/news/132052/minister-conducts-post-vandalism-inspection-of-antara-papua-office
5) Minister conducts post-vandalism inspection of ANTARA Papua office
19 minutes ago
Jayapura, Papua (ANTARA) - Public Works and People Housing (PUPR) Minister Basuki Hadimuljono inspected the ANTARA News Agency office in Jayapura, Papua, Tuesday, after it became the target of vandalistic attack by demonstrators in a riot on Aug 29.Hadimuljono, in the company of Papua's Government Secretary Heri Dosinaen, observed the condition of the office building, whose windows had been shattered.The duo thereafter continued their inspection by checking the condition of the National Commission on Human Rights' office building located right next to ANTARA's on the Soa Siu Dok V Bawah Street.Hadimuljono, along with PUPR officials, inspected several offices, comprising Papua's People Assembly (MRP) and Governor office buildings, which were scorched and damaged by protesters at the same event of last week's rally."This inspection result will be reported to the president at a limited meeting in connection with the issuance of a presidential regulation as a preemptive solution to the issue," Hadimuljono remarked.The rally, staged to protest against racial behavior towards Papuans and spiraling into a riot, had brought public activities in Jayapura, the capital city of Papua, to a standstill. Not only were office buildings destroyed but several residential houses were also set ablaze, triggering forced mass evacuations of people to the Navy's quarter Mako Lantamal X Jayapura at Hamadi District.Related news: Government to restore public facilities damaged in Papua unrestRelated news: Minister makes assurance of air transportation normal in PapuaRelated news: Police clear air on no further protest, counter-demonstration in PapuaRelated news: Two named in racist speech case against Papuans

Posted by AWPA Sydney News at 2:37 AM