1) She tweeted about the attack on Papuan students. Now, she is state enemy No. 1

2) Extra care for Papua brethren crucial to maintaining Indonesia's unity
3) Hearts, minds approach instrumental in tackling Papuan issues: speaker
--------------------------
https://www.thejakartapost.com/news/2019/09/06/she-informs-the-world-about-the-situation-in-papua-now-she-is-state-enemy-no-1.html?src=mostviewed&pg=/
1) She tweeted about the attack on Papuan students. Now, she is state enemy No. 1
Karina M. Tehusijarana The Jakarta Post
Jakarta   /   Fri, September 6, 2019   /  12:51 pm
Human rights lawyer Veronica Koman is firmly in the government’s crosshairs after the East Java Police named her a suspect for allegedly provoking protests and riots in Papua and West Papua.
The government’s focus on Veronica was in evidence on Thursday, when Coordinating Political, Legal and Security Affairs Minister Wiranto mentioned her as “the most important part” of his press conference regarding the situation in Papua.
“I think it’s already viral, what she said as provocation, inciting [Papuans] to continue to carry out resistance, to conduct violent demonstrations. She has been named a suspect,” Wiranto said, adding that she was being “pursued by Interpol” because she was currently outside the country.
On Wednesday, the East Java Police announced that they had named Veronica a suspect for allegedly violating four different laws, including the 2008 Electronic Information and Transactions (ITE) Law. East Java Police chief Insp. Luki Hermawan said the activist had “aggressively provoked” citizens via twitter account @VeronicaKoman by giving out information on the recent protests and riots.
Veronica, who is also a lawyer for the National Committee for West Papua (KNPB), has regularly tweeted videos of marches and rallies in various cities and regions since protests first broke out in Papua and West Papua on August 19.
Since the government instituted an internet blackout for the country's easternmost provinces on August 21, her tweets have been one of the only sources of information from the restive region, including those surrounding the protests that broke out in the two provinces.
Veronica has a long track record of human rights activism and advocacy. She first became known for her advocacy for Papuans after she represented two Papuan university students who were charged with assaulting police during a demonstration on self-determination in Jakarta in 2015. At the time, Veronica was working for the Jakarta Legal Aid Society (LBH Jakarta).
In 2016, Veronica joined a group of lawyers who petitioned the Central Information Commission (KIP) to release the investigative findings from a government-commissioned fact-finding team on the murder of Munir Said Thalib, a prominent human rights activist who died from arsenic poisoning in 2004.
She was also among a group of lawyers who petitioned the Constitutional Court to strike down several articles regarding treason in the Criminal Code in 2017. The lawyers were representing Papuan petitioners, as many Papuan activists have been charged with treason over the years.
Being named a suspect is also not the first time Veronica has fallen afoul of the government.
In 2017, Veronica made headlines after Home Affairs Minister Tjahjo Kumolo distributed a photograph of her e-ID card to a WhatsApp group for journalists who cover the ministry.
Veronica had spoken at a rally condemning the blasphemy conviction of then-Jakarta governor Basuki “Ahok” Tjahaja Purnama and said that President Joko "Jokowi" Widodo's regime "is worse" than that of former president Susilo Bambang Yudhoyono, a statement that Tjahjo apparently took issue with.
“What did Pak Jokowi do wrong? Why is he always linked with the Ahok issue?” he said in the WhatsApp group.
More recently, the Communications and Information Ministry labeled a tweet Veronica made during the incident in the Papuan student dormitory in Surabaya as a “hoax.”
Replying to @VeronicaKoman
17/8/19 Surabaya, Java 2 orang pengantar makan minum untuk penghuni asrama yang belum makan minum sejak siang barusan ditangkap polisi 2 people delivering food and water for the students who haven’t eaten and drunk the whole day were just arrested
In the tweet, Veronica said that two people who were delivering food and water for the students trapped in the dorm had been arrested.
A screenshot of her tweet with the word “hoax” stamped on it was posted on the ministry’s official website, with the explanation that the two people had not been “kidnapped,” despite Veronica never using the word “kidnapped” in her tweet. The ministry later took down the post and apologized for the mistake.
Veronica has yet to make a public statement about her status as a suspect, but has continued to post videos and updates from Papua and West Papua.
As of the time of writing, among her latest tweets was a video of the burial preparations for Pilemon Waine, a protester who was shot dead in a clash between protesters and security forces in Deiyai on August 28.
Aside from the ITE Law, Veronica may also be charged under Article 160 of the Criminal Code, and Law No. 40/2008 on the elimination of race and ethnicity discrimination, for allegedly instigating unrest.
Rights group Amnesty International has condemned the police’s decision, and the Papuan Student Alliance (AMP) has urged the police to lift Veronica’s status as a suspect “as soon as possible.”
United Liberation Movement for West Papua (ULWMP) chairman Benny Wenda called the charges against Veronica absurd in an interview with ABC Radio Australia on Thursday.
"This is a woman who is defending human rights, she is not engaged in any political games," he said.Several netizens have also defended her, tweeting the hashtag #SayaBersamaVeronicaKoman (IStandWithVeronicaKoman). 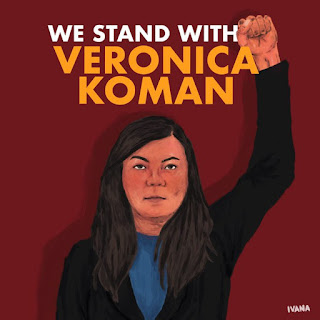